Encyclopedia
Lymphadenopathy is a term meaning "disease
Disease
A disease is an abnormal condition affecting the body of an organism. It is often construed to be a medical condition associated with specific symptoms and signs. It may be caused by external factors, such as infectious disease, or it may be caused by internal dysfunctions, such as autoimmune...
of the lymph nodes." It is, however, almost synonymously used with "swollen/enlarged lymph nodes". It could be due to infection
Infection
An infection is the colonization of a host organism by parasite species. Infecting parasites seek to use the host's resources to reproduce, often resulting in disease...
, auto-immune disease, or malignancy.


Tangier disease (ABCA1 deficiency) may also cause this

Enlarged lymph nodes are a common symptom in a number of infectious and malignant diseases. It is a recognized symptom of many diseases, of which some are as follows:

There are three distinct patterns of benign lymphadenopathy: 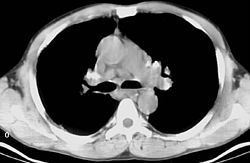 Bilateral hilar lymphadenopathy (BHL) is a radiographic
Radiography
Radiography is the use of X-rays to view a non-uniformly composed material such as the human body. By using the physical properties of the ray an image can be developed which displays areas of different density and composition....
term that describes the enlargement of mediastinal lymph
Lymph
Lymph is considered a part of the interstitial fluid, the fluid which lies in the interstices of all body tissues. Interstitial fluid becomes lymph when it enters a lymph capillary...
nodes. It is easily and most commonly identified by a chest x-ray
Chest X-ray
In medicine, a chest radiograph, commonly called a chest X-ray , is a projection radiograph of the chest used to diagnose conditions affecting the chest, its contents, and nearby structures...
.