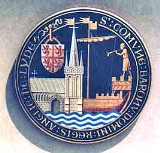 Overview
Lydd is a town
Town
A town is a human settlement larger than a village but smaller than a city. The size a settlement must be in order to be called a "town" varies considerably in different parts of the world, so that, for example, many American "small towns" seem to British people to be no more than villages, while...
in Kent
Kent
Kent is a county in southeast England, and is one of the home counties. It borders East Sussex, Surrey and Greater London and has a defined boundary with Essex in the middle of the Thames Estuary. The ceremonial county boundaries of Kent include the shire county of Kent and the unitary borough of...
, England
England
England is a country that is part of the United Kingdom. It shares land borders with Scotland to the north and Wales to the west; the Irish Sea is to the north west, the Celtic Sea to the south west, with the North Sea to the east and the English Channel to the south separating it from continental...
, lying on the Romney Marsh
Romney Marsh
Romney Marsh is a sparsely populated wetland area in the counties of Kent and East Sussex in the south-east of England. It covers about 100 mi ² .-Quotations:*“As Egypt was the gift of the Nile, this level tract .....
. It is one of the larger towns on the Marsh, and the most southerly town in Kent. Actually located on Denge Marsh, Lydd was one of the first sandy islands to form as the bay evolved into what is now called the Romney Marsh. The name Hlyda, which derives from the Latin word for "shore", was found in a Saxon charter dating from the 8th century.

The parish of Lydd comprises the town of Lydd, Dungeness, Lydd-on-Sea
Lydd-on-Sea
Lydd-on-Sea is a modern village, mostly built after World War II, which consists mainly of bungalows built along the Dungeness coastal road south of Greatstone, Kent, England. The Southern Railway opened a railway station here in 1937, but this was closed in 1967...
and parts of Greatstone
Greatstone-on-Sea
Greatstone is a beach-side town, the third town up from the "point" of the Romney Marsh area.It is situated near the largest town there, New Romney in Kent, England. Permission was given in the 1920s for a company to construct large numbers of homes and facilities; only a small number were built...
.

Notable buildings in Lydd include a Guildhall and a mediaeval
Middle Ages
The Middle Ages is a periodization of European history from the 5th century to the 15th century. The Middle Ages follows the fall of the Western Roman Empire in 476 and precedes the Early Modern Era. It is the middle period of a three-period division of Western history: Classic, Medieval and Modern...
courthouse
Courthouse
A courthouse is a building that is home to a local court of law and often the regional county government as well, although this is not the case in some larger cities. The term is common in North America. In most other English speaking countries, buildings which house courts of law are simply...
.

I am looking for"Bristol Cottage" Lydd, my grandfather lived there around 1910.Married at the registry office 1910. anybody know of it? any info much ...
More
x