Encyclopedia
Luton Town Hall is situated at the junction between Manchester Street, Upper George Street and George Street, Luton
Luton
Luton is a large town and unitary authority of Bedfordshire, England, 30 miles north of London. Luton and its near neighbours, Dunstable and Houghton Regis, form the Luton/Dunstable Urban Area with a population of about 250,000....
, England
England
England is a country that is part of the United Kingdom. It shares land borders with Scotland to the north and Wales to the west; the Irish Sea is to the north west, the Celtic Sea to the south west, with the North Sea to the east and the English Channel to the south separating it from continental...
; the current building was completed in 1936 on the site of the older Town Hall which was burnt down 19 July 1919, following the Peace Day Riots. 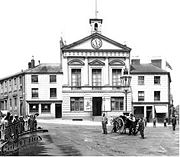 The original Town Hall was built in the classical
Classical architecture
Classical architecture is a mode of architecture employing vocabulary derived in part from the Greek and Roman architecture of classical antiquity, enriched by classicizing architectural practice in Europe since the Renaissance...
style with Dorian columns
Doric order
The Doric order was one of the three orders or organizational systems of ancient Greek or classical architecture; the other two canonical orders were the Ionic and the Corinthian.-History:...
supporting a frieze
Frieze
thumb|267px|Frieze of the [[Tower of the Winds]], AthensIn architecture the frieze is the wide central section part of an entablature and may be plain in the Ionic or Doric order, or decorated with bas-reliefs. Even when neither columns nor pilasters are expressed, on an astylar wall it lies upon...
designed by Luton architects John Williams and Sons in 1846 and was built for a total cost excluding the purchasing of the land for £2,200 . It was built by the Town Hall Company to hold public meetings and entertainment in the town and was only bought by Luton town council in 1874.

In 1856 a small tower and clock was added in commemoration of the Crimean War
Crimean War
The Crimean War was a conflict fought between the Russian Empire and an alliance of the French Empire, the British Empire, the Ottoman Empire, and the Kingdom of Sardinia. The war was part of a long-running contest between the major European powers for influence over territories of the declining...
. The prosperity of Bedfordshire
Bedfordshire
Bedfordshire is a ceremonial county of historic origin in England that forms part of the East of England region.It borders Cambridgeshire to the north-east, Northamptonshire to the north, Buckinghamshire to the west and Hertfordshire to the south-east....
in the early part of the 20th century led to the expansion of the original town hall, and a public house
Public house
A public house, informally known as a pub, is a drinking establishment fundamental to the culture of Britain, Ireland, Australia and New Zealand. There are approximately 53,500 public houses in the United Kingdom. This number has been declining every year, so that nearly half of the smaller...
and other neighbouring buildings were converted to provide additional office and administration. Some discussions had taken place amongst the councillors about replacing the older parts of the complex, but with the onset of World War I
World War I
World War I , which was predominantly called the World War or the Great War from its occurrence until 1939, and the First World War or World War I thereafter, was a major war centred in Europe that began on 28 July 1914 and lasted until 11 November 1918...
in 1914 these plans were shelved.


Destruction in the Peace Day Riots

On Peace Day, July 19, 1919, the Town Hall was burnt down during a riot by ex-servicemen unhappy with unemployment and other grievances. The riot started after members of the council arrived to read out the King’s proclamation and many in the crowd expressed their disapproval. Tension boiled over into violence and a number of protesters broke through the police line and forcibly entered the town hall. Shortly after a number of violent clashes took place, with the town hall being stormed by the crowd and eventually set on fire. A number of valuable documents relating to local history were lost, including a Papal Bull
Papal bull
A Papal bull is a particular type of letters patent or charter issued by a Pope of the Catholic Church. It is named after the bulla that was appended to the end in order to authenticate it....
, sent by Pope Adrian IV
Pope Adrian IV
Pope Adrian IV , born Nicholas Breakspear or Breakspeare, was Pope from 1154 to 1159.Adrian IV is the only Englishman who has occupied the papal chair...
to the vicar of Shefford
Shefford, Bedfordshire
Shefford is a small town and civil parish located in the Central Bedfordshire district of Bedfordshire, England. At the 2001 census it had a population of 4,928, although this was estimated to have grown to 5,770 by 2007.-History:...
in the 12th century. During the riot people broke into Farmers Music Shop and dragged piano
Piano
The piano is a musical instrument played by means of a keyboard. It is one of the most popular instruments in the world. Widely used in classical and jazz music for solo performances, ensemble use, chamber music and accompaniment, the piano is also very popular as an aid to composing and rehearsal...
s into the streets for dancing and singing, including ironically "Keep the home fires burning". The mayor at the time, Henry Impey was smuggled out of Luton never to return.

Order was eventually restored to the town by midnight on 19 July, but the fire brigade were unable to extinguish the fire and by the next morning the town hall was little more than ruins. The remains of the building were demolished in August 1919 and in 1922 the statue "Peace" (designed by Sir Reginald Blomfield
Reginald Blomfield
Sir Reginald Theodore Blomfield was a prolific British architect, garden designer and author of the Victorian and Edwardian period.- Early life and career :...
) inscribed with the names of more than 280,000 dead servicemen from the Great War was unveiled. The war memorial still stands in front of the Town Hall.

Following the destruction of the building the town's administration was carried out from the Carnegie Library
Carnegie library
A Carnegie library is a library built with money donated by Scottish-American businessman and philanthropist Andrew Carnegie. 2,509 Carnegie libraries were built between 1883 and 1929, including some belonging to public and university library systems...
(now demolished and eventually replaced by a Poundstretcher
Poundstretcher
Poundstretcher is a chain of discount stores operating in the United Kingdom. It is based in Deighton, England, near Huddersfield on the A62.-History:...
shop).

It was decided that the original site still offered the best location in the town for a replacement, and in 1930 a competition was held for designs for the new town hall with cash prizes for the four best entries. There were 86 entries to the competition, with the £500 top prize going to Bradshaw Gass & Hope
Bradshaw Gass & Hope
Bradshaw Gass & Hope is an English firm of architects founded in 1862 by Jonas James Bradshaw . The style "Bradshaw Gass & Hope" was adopted after J. J...
from Bolton
Bolton
Bolton is a town in Greater Manchester, in the North West of England. Close to the West Pennine Moors, it is north west of the city of Manchester. Bolton is surrounded by several smaller towns and villages which together form the Metropolitan Borough of Bolton, of which Bolton is the...
. Building work started in May 1935 and was completed the following year. One key design feature was that this time the building was to be constructed from fireproof
Fireproof
-Track List for Original 2002 Release:# "Fireproof" – 3:46# "Just 2 Get By" – 4:17# "Echelon" – 3:25# "Stay Up" – 3:40# "Behind Closed Doors" – 2:55# "Epidemic" – 3:14# "Hindsight" – 2:57# "Light at My Feet" – 3:28# "A Shame" – 3:17...
materials. 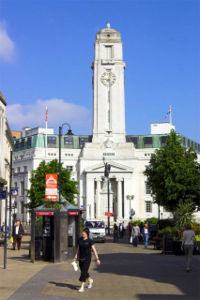 Work finally started on a replacement town hall in 1930 and took until 1936 to complete. The new town hall is a steel-framed
Steel frame
Steel frame usually refers to a building technique with a "skeleton frame" of vertical steel columns and horizontal -beams, constructed in a rectangular grid to support the floors, roof and walls of a building which are all attached to the frame...
building clad in grey Portland Stone
Portland stone
Portland stone is a limestone from the Tithonian stage of the Jurassic period quarried on the Isle of Portland, Dorset. The quarries consist of beds of white-grey limestone separated by chert beds. It has been used extensively as a building stone throughout the British Isles, notably in major...
and used no fewer than seven million bricks. H.R.H. The Duke of Kent
Prince George, Duke of Kent
Prince George, Duke of Kent was a member of the British Royal Family, the fourth son of George V and Mary of Teck, and younger brother of Edward VIII and George VI...
opened the town hall on 28 October 1936. The building has many typical Art Deco
Art Deco
Art deco , or deco, is an eclectic artistic and design style that began in Paris in the 1920s and flourished internationally throughout the 1930s, into the World War II era. The style influenced all areas of design, including architecture and interior design, industrial design, fashion and...
features, but is correctly described as neoclassical
Neoclassical architecture
Neoclassical architecture was an architectural style produced by the neoclassical movement that began in the mid-18th century, manifested both in its details as a reaction against the Rococo style of naturalistic ornament, and in its architectural formulas as an outgrowth of some classicizing...
on account of the contrast between the classical and modern styles.

In contrast to the bold vertical lines of the exterior, the principal interior rooms and corridors are very ornate. Many of the interior's original furnishings survive to this day and again are Art Deco
Art Deco
Art deco , or deco, is an eclectic artistic and design style that began in Paris in the 1920s and flourished internationally throughout the 1930s, into the World War II era. The style influenced all areas of design, including architecture and interior design, industrial design, fashion and...
in style, including the windows, staircase rails, door panels and radiator screens. Many of the features recall images from the town's coat of arms, which is displayed above the main entrance: the bee, the wheatsheaf, the rose and the thistle.

The bell in the rebuilt town hall is the heaviest in the county weighing approximately two tonnes.

During the Second World War
World War II
World War II, or the Second World War , was a global conflict lasting from 1939 to 1945, involving most of the world's nations—including all of the great powers—eventually forming two opposing military alliances: the Allies and the Axis...
, the clock tower was camouflaged in order to protect it during air raids
Airstrike
An air strike is an attack on a specific objective by military aircraft during an offensive mission. Air strikes are commonly delivered from aircraft such as fighters, bombers, ground attack aircraft, attack helicopters, and others...
as the bright white stonework would have been extremely visible from the air. In 1998 Luton Town Hall was given special protection and was listed as a Grade II listed building "of special architectural or historical interest".

During the 1980s a modern extension was built on Manchester Street to provide additional office space. An extension was also added to the roof of the town hall, which is clearly visible in the photograph.