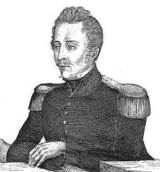 Encyclopedia
Colonel Luis Florentino Juan Manuel Silvestre de los Dolores de la Carrera y Verdugo (1791 – April 8, 1818) was a Chile
Chile
Chile ,officially the Republic of Chile , is a country in South America occupying a long, narrow coastal strip between the Andes mountains to the east and the Pacific Ocean to the west. It borders Peru to the north, Bolivia to the northeast, Argentina to the east, and the Drake Passage in the far...
an military officer who fought in the Chilean War of Independence. Together with his brothers José Miguel
José Miguel Carrera
José Miguel Carrera Verdugo was a Chilean general, member of the prominent Carrera family, and considered one of the founders of independent Chile. Carrera was the most important leader of the Chilean War of Independence during the period of the Patria Vieja...
and Juan José, they were some of most important leaders of Chilean struggle for independence during the period of the Patria Vieja
Patria Vieja
Patria Vieja refers to a time period in the History of Chile occurring between the First Junta of the Government and the Disaster of Rancagua . This period was characterized by the transformation from a movement of temporary autonomy to one of total independence...
("Old Republic"). The Carrera family
Carrera family
The Carrera family of Chile became politically influential during the colonial period, and played a significant role in Chilean Independence. They remained politically important throughout the 19th century...
is of Basque
Basque people
The Basques as an ethnic group, primarily inhabit an area traditionally known as the Basque Country , a region that is located around the western end of the Pyrenees on the coast of the Bay of Biscay and straddles parts of north-central Spain and south-western France.The Basques are known in the...
origin.

Luis Carrera was born in Santiago, the youngest son of Ignacio de la Carrera y Cuevas
Ignacio de la Carrera
Ignacio de la Carrera y Cuevas was a Chilean aristocrat, member of the First Government Junta of Chile, and father of the Carrera brothers, who were some of the most important leaders of the early Chilean struggles for independence during the period of the Patria Vieja...
and of Francisca de Paula Verdugo Fernández de Valdivieso y Herrera. Carrera completed his first studies at the Convictorio Carolino, the best school in the country at the time. In 1813 - at the beginning of the Chilean War of Independence - he participated in the first encounter between the Patriot and Royalist troops at the Battle of Yerbas Buenas
Battle of Yerbas Buenas
The Battle of Yerbas Buenas developed during the Chilean War of Independence on April 27, 1813. It is also known as the Surprise of Yerbas Buenas....
, as a commander of an artillery platoon. That same year he also participated in the disastrous Siege of Chillán
Siege of Chillan
The Siege of Chillán occurred July 27 to August 10, 1813, as patriot forces attempted to dislodge a determined band of royalist defenders. The failure of José Miguel Carrera to take the city would contribute to his removal from office by the junta later in the campaign.-Background:The city of...
, one of the most negative early experiences for the nascent Chilean Army
Chilean Army
The Chilean Army is the land arm of the Military of Chile. This 45,000-person army is organized into seven divisions, a special operations brigade and an air brigade....
, where after a long siege of the Spanish troops that were barricaded inside the city, the army had to withdraw in the midst of winter that same year. He also fought in the defense of Talca.

After the Spanish Reconquista (Spanish America)
Reconquista (Spanish America)
In colonial Spanish America, the Reconquista refers to the period following the defeat of Napoleon in 1814 during which royalist armies were able to gain the upper hand in the Spanish American wars of independence...
("Reconquest"), the Carrera brothers were exiled to Argentina but continued campaigning from exile. On November 21, 1814 he killed Brigadier Juan Mackenna
Juan Mackenna
Brigadier Juan Mackenna was an Irish-born, Chilean military officer and hero of the Chilean War of Independence. He is considered to have been the creator of the Corps of Military Engineers of the Chilean Army....
, one of the strongest supporters of General Bernardo O'Higgins
Bernardo O'Higgins
Bernardo O'Higgins Riquelme was a Chilean independence leader who, together with José de San Martín, freed Chile from Spanish rule in the Chilean War of Independence. Although he was the second Supreme Director of Chile , he is considered one of Chile's founding fathers, as he was the first holder...
, in a duel in the city of Buenos Aires
Buenos Aires
Buenos Aires is the capital and largest city of Argentina, and the second-largest metropolitan area in South America, after São Paulo. It is located on the western shore of the estuary of the Río de la Plata, on the southeastern coast of the South American continent...
. He was arrested and tried but later freed. Eventually, Luis was taken prisoner and executed in the city of Mendoza
Mendoza, Argentina
Mendoza is the capital city of Mendoza Province, in Argentina. It is located in the northern-central part of the province, in a region of foothills and high plains, on the eastern side of the Andes. As of the , Mendoza's population was 110,993...
together with his brother Juan José by the military of the United Provinces of South America
United Provinces of South America
The United Provinces of South America was the original name of the state that emerged from the May Revolution and the early developments of the Argentine War of Independence...
(River Plate
Río de la Plata
The Río de la Plata —sometimes rendered River Plate in British English and the Commonwealth, and occasionally rendered [La] Plata River in other English-speaking countries—is the river and estuary formed by the confluence of the Uruguay River and the Paraná River on the border between Argentina and...
) in 1818.