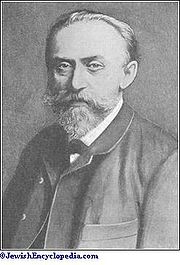 Ludwig Bamberger was a German
Germany
Germany , officially the Federal Republic of Germany , is a federal parliamentary republic in Europe. The country consists of 16 states while the capital and largest city is Berlin. Germany covers an area of 357,021 km2 and has a largely temperate seasonal climate...
economist
Economist
An economist is a professional in the social science discipline of economics. The individual may also study, develop, and apply theories and concepts from economics and write about economic policy...
, politician
Politician
A politician, political leader, or political figure is an individual who is involved in influencing public policy and decision making...
and writer.

Bamberger was born in a Jewish family in Mainz
Mainz
Mainz under the Holy Roman Empire, and previously was a Roman fort city which commanded the west bank of the Rhine and formed part of the northernmost frontier of the Roman Empire...
.
After studying at Gießen
Gießen
Gießen, also spelt Giessen is a town in the German federal state of Hesse, capital of both the district of Gießen and the administrative region of Gießen...
, Heidelberg
Heidelberg
-Early history:Between 600,000 and 200,000 years ago, "Heidelberg Man" died at nearby Mauer. His jaw bone was discovered in 1907; with scientific dating, his remains were determined to be the earliest evidence of human life in Europe. In the 5th century BC, a Celtic fortress of refuge and place of...
and Göttingen
Göttingen
Göttingen is a university town in Lower Saxony, Germany. It is the capital of the district of Göttingen. The Leine river runs through the town. In 2006 the population was 129,686.-General information:...
, he entered law.

When the revolution of 1848 broke out he took an active part as one of the leaders of the republican party in his native city, both as popular orator and as editor of the Mainzer Zeitung. In 1849 he took part in the republican rising in the Palatinate and Baden; on the restoration of order he was condemned to death, but he had escaped to Switzerland
Switzerland
Switzerland name of one of the Swiss cantons. ; ; ; or ), in its full name the Swiss Confederation , is a federal republic consisting of 26 cantons, with Bern as the seat of the federal authorities. The country is situated in Western Europe,Or Central Europe depending on the definition....
. The next years he spent in exile, at first in London
London
London is the capital city of :England and the :United Kingdom, the largest metropolitan area in the United Kingdom, and the largest urban zone in the European Union by most measures. Located on the River Thames, London has been a major settlement for two millennia, its history going back to its...
, then in the Netherlands
Netherlands
The Netherlands is a constituent country of the Kingdom of the Netherlands, located mainly in North-West Europe and with several islands in the Caribbean. Mainland Netherlands borders the North Sea to the north and west, Belgium to the south, and Germany to the east, and shares maritime borders...
; in 1852 he went to Paris
Paris
Paris is the capital and largest city in France, situated on the river Seine, in northern France, at the heart of the Île-de-France region...
, where, by means of private connections, he received an appointment in the bank of Bischoffheim & Goldschmidt, of which he became managing director, a post which he held till 1866. During these years he saved a competence and gained a thorough acquaintance with the theory and practice of finance. This he put to account when the amnesty of 1866 enabled him to return to Germany
Germany
Germany , officially the Federal Republic of Germany , is a federal parliamentary republic in Europe. The country consists of 16 states while the capital and largest city is Berlin. Germany covers an area of 357,021 km2 and has a largely temperate seasonal climate...
.

He was elected a member of the Reichstag
Reichstag (German Empire)
The Reichstag was the parliament of the North German Confederation , and of the German Reich ....
, where he joined the National Liberal Party
National Liberal Party (Germany)
The National Liberal Party was a German political party which flourished between 1867 and 1918. It was formed by Prussian liberals who put aside their differences with Bismarck over domestic policy due to their support for his highly successful foreign policy, which resulted in the unification of...
, for, like many other exiles, he was willing to accept the results of Otto von Bismarck
Otto von Bismarck
Otto Eduard Leopold, Prince of Bismarck, Duke of Lauenburg , simply known as Otto von Bismarck, was a Prussian-German statesman whose actions unified Germany, made it a major player in world affairs, and created a balance of power that kept Europe at peace after 1871.As Minister President of...
’s work. In 1868 he published a short life of Bismarck in French, with the object of producing a better understanding of German affairs, and in 1870, owing to his intimate acquaintance with France and with finance, he was summoned by Bismarck to Versailles
Versailles
Versailles , a city renowned for its château, the Palace of Versailles, was the de facto capital of the kingdom of France for over a century, from 1682 to 1789. It is now a wealthy suburb of Paris and remains an important administrative and judicial centre...
to help in the discussion of terms of peace.

In the German Reichstag he was the leading authority on matters of finance and economics, as well as a clear and persuasive speaker, and it was chiefly owing to him that a gold currency was adopted and that the Reichsbank
Reichsbank
The Reichsbank was the central bank of Germany from 1876 until 1945. It was founded on 1 January 1876 . The Reichsbank was a privately owned central bank of Prussia, under close control by the Reich government. Its first president was Hermann von Dechend...
took form; in his later years he wrote and spoke strongly against bimetallism
Bimetallism
In economics, bimetallism is a monetary standard in which the value of the monetary unit is defined as equivalent both to a certain quantity of gold and to a certain quantity of silver; such a system establishes a fixed rate of exchange between the two metals...
. He was the leader of the free trade
Free trade
Under a free trade policy, prices emerge from supply and demand, and are the sole determinant of resource allocation. 'Free' trade differs from other forms of trade policy where the allocation of goods and services among trading countries are determined by price strategies that may differ from...
rs, and after 1878 refused to follow Bismarck in his new policy of protection, state socialism and colonial development. On account of his opposition to Bismarck's economic policy, he left the National Liberal Party and joined the “Secessionists
Liberal Union (Germany)
The Liberal Union was a short-lived liberal party in the German Empire. It was founded as a break-away from the National Liberal Party, therefore also called Secession, in 1880, and merged with the left liberal German Progress Party to form the German Free-minded Party in 1884.The leftist faction...
” which later merged into the German Free-minded Party. He was also a founder of the Verein zur Förderung der Handelsfreiheit (Group for the Promotion of Free Trade).

With private banker Adelbert Delbruck, on January 22, 1870, he founded Deutsche Bank
Deutsche Bank
Deutsche Bank AG is a global financial service company with its headquarters in Frankfurt, Germany. It employs more than 100,000 people in over 70 countries, and has a large presence in Europe, the Americas, Asia Pacific and the emerging markets...
in Berlin
Berlin
Berlin is the capital city of Germany and is one of the 16 states of Germany. With a population of 3.45 million people, Berlin is Germany's largest city. It is the second most populous city proper and the seventh most populous urban area in the European Union...
as a specialist bank for foreign trade.
In 1892 he retired from political life and died in 1899.

Bamberger was a clear and attractive writer and was a frequent contributor on political and economic questions to the Nation and other periodicals. Among his noted publications — which include works on the currency, on the French war indemnity, his criticism of socialism and his apology for the Secession
Secession
Secession is the act of withdrawing from an organization, union, or especially a political entity. Threats of secession also can be a strategy for achieving more limited goals.-Secession theory:...
— are: