Encyclopedia
Ludaš or Ludoš Lake is a shallow lake in the province of Vojvodina
Vojvodina
Vojvodina, officially called Autonomous Province of Vojvodina is an autonomous province of Serbia. Its capital and largest city is Novi Sad...
in northern Serbia
Serbia
Serbia , officially the Republic of Serbia , is a landlocked country located at the crossroads of Central and Southeast Europe, covering the southern part of the Carpathian basin and the central part of the Balkans...
, near Subotica
Subotica
Subotica is a city and municipality in northern Serbia, in the Autonomous Province of Vojvodina...
. It is a special natural preserve and, since 1977, designated as a swamp area of international significance by the Ramsar Convention
Ramsar Convention
The Ramsar Convention is an international treaty for the conservation and sustainable utilization of wetlands, i.e., to stem the progressive encroachment on and loss of wetlands now and in the future, recognizing the fundamental ecological functions of wetlands and their economic, cultural,...
. The name of the lake stems from Hungarian "ludas", meaning goose
Goose
The word goose is the English name for a group of waterfowl, belonging to the family Anatidae. This family also includes swans, most of which are larger than true geese, and ducks, which are smaller....
.

The lake is located 12 kilometers southeast of Subotica, 10 km away from the E75
E75 in Serbia
The part of the European route E75 in Serbia spans approximately . It crosses the country from north to south, starting at Horgoš border crossing with Hungary and ending with Preševo border crossing with Republic of Macedonia...
motorway, near the villages of Šupljak
Šupljak
Šupljak is a village in Serbia. It is situated in the Subotica municipality, in the North Bačka District, Vojvodina province. The village has a Hungarian ethnic majority and its population numbering 1,310 people .-See also:...
and Hajdukovo
Hajdukovo
Hajdukovo is a village located in the Subotica municipality, in the North Bačka District of Serbia. It is situated in the autonomous province of Vojvodina. The village has a Hungarian ethnic majority and its population numbering 2,482 people .-External links:*...
. About 4.5 km long, it stretches in north-south direction. It lies on the sandy terrain between Danube
Danube
The Danube is a river in the Central Europe and the Europe's second longest river after the Volga. It is classified as an international waterway....
and Tisza
Tisza
The Tisza or Tisa is one of the main rivers of Central Europe. It rises in Ukraine, and is formed near Rakhiv by the junction of headwaters White Tisa, whose source is in the Chornohora mountains and Black Tisa, which springs in the Gorgany range...
rivers, at the borderline of Bačka
Backa
Bačka is a geographical area within the Pannonian plain bordered by the river Danube to the west and south, and by the river Tisza to the east of which confluence is located near Titel...
loess
Loess
Loess is an aeolian sediment formed by the accumulation of wind-blown silt, typically in the 20–50 micrometre size range, twenty percent or less clay and the balance equal parts sand and silt that are loosely cemented by calcium carbonate...
ial plateau. Its northern part is wider and swamp
Swamp
A swamp is a wetland with some flooding of large areas of land by shallow bodies of water. A swamp generally has a large number of hammocks, or dry-land protrusions, covered by aquatic vegetation, or vegetation that tolerates periodical inundation. The two main types of swamp are "true" or swamp...
y, while the southern part is embedded into loess, with shores 3–4 m high. The bottom of the lake is made of watertight layer of white clay
Clay
Clay is a general term including many combinations of one or more clay minerals with traces of metal oxides and organic matter. Geologic clay deposits are mostly composed of phyllosilicate minerals containing variable amounts of water trapped in the mineral structure.- Formation :Clay minerals...
, covered with mud. The water is shallow, with the average depth of just 1 m and reaching the maximum depth of 2.25 m. The lake freezes up to three months a year, and in the summer its temperature can reach as high as 30 °C (86 °F).

The lake is of aeolian origin, and its bed was formed approximately 1 million years ago, as winds emptied the sand dunes along the clay plateau. Before the water regulation system in the area was introduced, it used to be a swamp, supplied by natural precipitation and several small water streams, while a branch of the Kereš
Kereš
The Körös-ér or Kereš is a river in southern Hungary and northern Serbia, a 70 km long right tributary to the Tisa river...
River takes the extraneous water away into Tisza. Today, it also receives water influx from Palić
Palic
Palić is a town in Serbia, from Subotica, and from the border between Serbia and Hungary. It is a part of the Subotica Municipality, North Bačka District, autonomous province of Vojvodina. The town has a Hungarian ethnic majority and its population numbering 7,745 people...
-Ludaš and Bega canals. 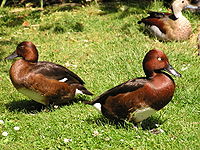 The lake and its surrounding are home to diverse habitat
Habitat
* Habitat , a place where a species lives and grows*Human habitat, a place where humans live, work or play** Space habitat, a space station intended as a permanent settlement...
s (aquatic, swamp, meadow
Meadow
A meadow is a field vegetated primarily by grass and other non-woody plants . The term is from Old English mædwe. In agriculture a meadow is grassland which is not grazed by domestic livestock but rather allowed to grow unchecked in order to make hay...
and steppe
Steppe
In physical geography, steppe is an ecoregion, in the montane grasslands and shrublands and temperate grasslands, savannas, and shrublands biomes, characterized by grassland plains without trees apart from those near rivers and lakes...
), with a number of plant and animal species. Protected lax-flowered orchid (Orchis laxiflora) is abundant on the meadow lowland terrain around the lake. Several other rare plants found their shelter here, such as: Milk-vetch (Astragalus exscapus), wind flower (Pulsatilla pratensis), sage
Salvia
Salvia is the largest genus of plants in the mint family, Lamiaceae, with approximately 700-900 species of shrubs, herbaceous perennials, and annuals. It is one of several genera commonly referred to as sage. When used without modifiers, sage generally refers to Salvia officinalis ; however, it is...
(Salvia austriaca
Salvia austriaca
Salvia austriaca, or Austrian sage, is a native of high altitudes across Russia and eastern Europe. The plant has a basal rosette of leaves 1 m across, which give off a fetid odor when brushed. The individual leaves are approx. 30 cm long, with indented midrib and veins...
), Herbaceous Periwinkle (Vinca herbacea
Vinca herbacea
Vinca herbacea is a flowering plant native to eastern and southeastern Europe, from Austria south to Greece, and east to the Crimea, and also in southwestern Asia east to the Caucasus and Alborz mountains...
), Golden Ragwort (Senecio doria
Senecio
Senecio is a genus of the daisy family that includes ragworts and groundsels. The flower heads are normally rayed, completely yellow, and the heads are borne in branched clusters...
).

There are 214 recorded species of bird
Bird
Birds are feathered, winged, bipedal, endothermic , egg-laying, vertebrate animals. Around 10,000 living species and 188 families makes them the most speciose class of tetrapod vertebrates. They inhabit ecosystems across the globe, from the Arctic to the Antarctic. Extant birds range in size from...
s, 140 of them being protected as natural rarities. Most of the species are migratory. Richness of birds is one of the primary reasons for the environmental protection of the lake's area. Bearded Reedling is the most outstanding characteristic bird, while White-headed duck
White-headed Duck
The White-headed Duck is a small stiff-tailed duck.Adult males have a grey and reddish body, a blue bill and a largely white head with a black cap and neck. Adult females have a grey-brown body with a white face and a darker bill, cap and a cheek stripe.This duck breeds in Spain and North Africa,...
, Ferruginous Duck
Ferruginous Duck
The Ferruginous Duck is a medium-sized diving duck from Eurasia. The species is known colloquially by birders as "Fudge Duck"....
and Moustached Warbler
Moustached Warbler
The Moustached Warbler, Acrocephalus melanopogon, is an Old World warbler in the genus Acrocephalus. It breeds in southern Europe and southern temperate Asia with a few in north-west Africa. It is partially migratory...
are just some listed on the IUCN Red List
IUCN Red List
The IUCN Red List of Threatened Species , founded in 1963, is the world's most comprehensive inventory of the global conservation status of biological species. The International Union for Conservation of Nature is the world's main authority on the conservation status of species...
.

Land fauna is represented with some 20 species, of those, the European Otter
European Otter
The European Otter , also known as the Eurasian otter, Eurasian river otter, common otter and Old World otter, is a European and Asian member of the Lutrinae or otter subfamily, and is typical of freshwater otters....
is a near-threatened species.

The first act of nature protection of the lake was passed in 1955, and in 1958 the area was designated as a strict nature reserve, covering an area of 6.33 square kilometres. In 1982, the area became an integral part of the "Palić-Ludaš" regional part, which was divided into two areas after building of the E-75 motorway in 1991. Efforts for the international protection status were first introduced in 1973, when the Executive Council of Vojvodina
Vojvodina
Vojvodina, officially called Autonomous Province of Vojvodina is an autonomous province of Serbia. Its capital and largest city is Novi Sad...
nominated the lake to the Ramsar Site List, and on March 28, 1977 it was included in the list of Wetlands of International Importance. In 1989, the lake and its surroundings were designated as an Important Bird Area
Important Bird Area
An Important Bird Area is an area recognized as being globally important habitat for the conservation of bird populations. Currently there are about 10,000 IBAs worldwide. The program was developed and sites are identified by BirdLife International...
.
The source of this article is wikipedia, the free encyclopedia.  The text of this article is licensed under the GFDL.