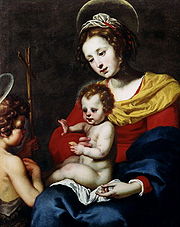 Lorenzo Lippi was an Italian
Italy
Italy , officially the Italian Republic languages]] under the European Charter for Regional or Minority Languages. In each of these, Italy's official name is as follows:;;;;;;;;), is a unitary parliamentary republic in South-Central Europe. To the north it borders France, Switzerland, Austria and...
painter
Painting
Painting is the practice of applying paint, pigment, color or other medium to a surface . The application of the medium is commonly applied to the base with a brush but other objects can be used. In art, the term painting describes both the act and the result of the action. However, painting is...
and poet
Poet
A poet is a person who writes poetry. A poet's work can be literal, meaning that his work is derived from a specific event, or metaphorical, meaning that his work can take on many meanings and forms. Poets have existed since antiquity, in nearly all languages, and have produced works that vary...
.

Born in Florence
Florence
Florence is the capital city of the Italian region of Tuscany and of the province of Florence. It is the most populous city in Tuscany, with approximately 370,000 inhabitants, expanding to over 1.5 million in the metropolitan area....
, he studied painting under Matteo Rosselli
Matteo Rosselli
Matteo Rosselli was an Italian painter of the late Florentine Counter-Maniera and early Baroque. He is best known however for his highly-populated grand-manner historical paintings.-Biography:...
. Both Baldassare Franceschini
Baldassare Franceschini
thumb|Portrait of Cardinal [[Gian Carlo de' Medici]].Baldassare Franceschini was an Italian late Baroque painter active mainly around Florence...
and Francesco Furini
Francesco Furini
Francesco Furini was an Italian Baroque painter of Florence.His early training was by Matteo Rosselli , though Furini is also described as influenced by Domenico Passignano and Giovanni Biliverti . He befriended Giovanni da San Giovanni...
were also apprenticed with Rosselli. the influence of whose style, and more especially of that of Santi di Tito
Santi di Tito
Santi di Tito was an Italian painter of Late-Mannerist or proto-Baroque style, what is sometimes referred to as Contra-Maniera or Counter-Mannerism.-Biography:...
, is to be traced in Lippi's works, which are marked by taste, delicacy and a strong turn for portrait-like naturalism
Naturalism (art)
Naturalism in art refers to the depiction of realistic objects in a natural setting. The Realism movement of the 19th century advocated naturalism in reaction to the stylized and idealized depictions of subjects in Romanticism, but many painters have adopted a similar approach over the centuries...
. His maxim was to poetize as he spoke, and to paint as he saw. His biography was recounted by Filippo Baldinucci
Filippo Baldinucci
Filippo Baldinucci was an Italian art historian and biographer.-Life:Baldinucci is considered among the most significant Florentine biographers/historians of the artists and the arts of the Baroque period...
.

After painting for some time in Florence, and having married at the age of forty the daughter of the rich sculptor named Giovanni Francesco Susini
Giovanni Francesco Susini
Giovanni Francesco Susini was a Mannerist Florentine sculptor in bronze and marble, trained in the workshop of Giambologna....
, Lippi went as court painter
Court painter
A court painter was an artist who painted for the members of a royal or noble family, sometimes on a fixed salary and on an exclusive basis where the artist was not supposed to undertake other work. Especially in the late Middle Ages, they were often given the office of valet de chambre...
to Innsbruck
Innsbruck
- Main sights :- Buildings :*Golden Roof*Kaiserliche Hofburg *Hofkirche with the cenotaph of Maximilian I, Holy Roman Emperor*Altes Landhaus...
, where he has left many excellent portraits.

In Innsbruck, he wrote his humorous poem named Malmantile Rae quistato, which was published under the anagrammatic pseudonym of Perlone Zipoli. The Malmantile Racquistato is a burlesque
Burlesque
Burlesque is a literary, dramatic or musical work intended to cause laughter by caricaturing the manner or spirit of serious works, or by ludicrous treatment of their subjects...
romance, mostly compounded out of a variety of popular tales; its principal subject matter is an expedition for the recovery of a fortress and territory whose queen had been expelled by a female usurper. It is full of graceful or racy Florentine idioms, and is counted by Italians as a testo di lingua. Lippi is remembered more for this poem than by his paintings. It was published posthumously in 1688.

Lippi was somewhat self-sufficient, and, when visiting Parma
Parma
Parma is a city in the Italian region of Emilia-Romagna famous for its ham, its cheese, its architecture and the fine countryside around it. This is the home of the University of Parma, one of the oldest universities in the world....
, would not look at the famous Correggios there, saying that they could teach him nothing. He died of pleurisy
Pleurisy
Pleurisy is an inflammation of the pleura, the lining of the pleural cavity surrounding the lungs. Among other things, infections are the most common cause of pleurisy....
in 1664, in Florence. The most esteemed works of Lippi as a painter are a Crucifixion in the Uffizi
Uffizi
The Uffizi Gallery , is a museum in Florence, Italy. It is one of the oldest and most famous art museums of the Western world.-History:...
gallery at Florence, and a Triumph of David which he executed for the salon of Angiolo Galli, introducing into it portraits of the seventeen children of the owner. Among his pupils is Bartolomeo Bimbi
Bartolomeo Bimbi
Bartolomeo Bimbi was a Florentine painter of still lifes spurred by his patrons including Cosimo III, Grand Duke of Tuscany to paint large canvases of flora and fauna for the Medici Villa dell'Ambrogiana and della Topaia, now conserved in the Pitti Palace and the Museo Botanico dell'Universita. He...
.

He should not be confused with the Quattrocento-Renaissance, father-son pair of Florentine painters Filippo
Filippo Lippi
Fra' Filippo Lippi , also called Lippo Lippi, was an Italian painter of the Italian Quattrocento .-Biography and works:...
and Filippino Lippi
Filippino Lippi
Filippino Lippi was an Italian painter working during the High Renaissance in Florence, Italy.-Biography:...
.
The source of this article is wikipedia, the free encyclopedia.  The text of this article is licensed under the GFDL.