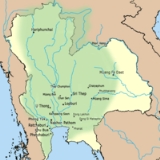 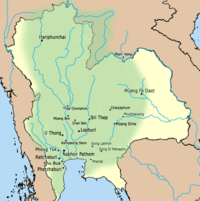 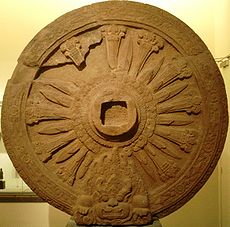 The Dvaravati period lasted from the 6th to the 13th centuries. Dvaravati refers to both a culture and a disparate conglomerate of principalities.

By the 10th century, Dvaravati began to come under the influence of the Khmer Empire
Khmer Empire
The Khmer Empire was one of the most powerful empires in Southeast Asia. The empire, which grew out of the former kingdom of Chenla, at times ruled over and/or vassalized parts of modern-day Laos, Thailand, Vietnam, Burma, and Malaysia. Its greatest legacy is Angkor, the site of the capital city...
and central Thailand
Thailand
Thailand , officially the Kingdom of Thailand , formerly known as Siam , is a country located at the centre of the Indochina peninsula and Southeast Asia. It is bordered to the north by Burma and Laos, to the east by Laos and Cambodia, to the south by the Gulf of Thailand and Malaysia, and to the...
was ultimately invaded by the Khmer king Suryavarman II
Suryavarman II
Suryavarman II was king of the Khmer Empire from 1113 AD to 1145-1150 AD and the builder of Angkor Wat, which he dedicated to the Hindu god Vishnu...
in the first half of the 12th century. Haripunchai
Haripunchai
Hariphunchai was a Mon kingdom in the north of present Thailand in the centuries before the Thais moved into the area. Its capital was at Lamphun, which at the time was also called Hariphunchai...
survived its southern progenitors until the late 13th century AD. when it was incorporated in the Lanna
Lanna
The Kingdom of Lanna was a kingdom centered in present-day northern Thailand from the 13th to 18th centuries. The cultural development of the people of Lanna, the Tai Yuan people, had begun long before as successive Tai Yuan kingdoms preceded Lanna...
Kingdom. The people of the region used the ancient Mon language
Mon language
The Mon language is an Austroasiatic language spoken by the Mon, who live in Burma and Thailand. Mon, like the related language Cambodian—but unlike most languages in Mainland Southeast Asia—is not tonal. Mon is spoken by more than a million people today. In recent years, usage of Mon has...
, but whether they were ethnically Mon
Mon people
The Mon are an ethnic group from Burma , living mostly in Mon State, Bago Division, the Irrawaddy Delta, and along the southern Thai–Burmese border. One of the earliest peoples to reside in Southeast Asia, the Mon were responsible for the spread of Theravada Buddhism in Burma and Thailand...
is unknown. There is evidence that these principalities may comprise many cultural groups of people, including Malays and Khmers
Khmer people
Khmer people are the predominant ethnic group in Cambodia, accounting for approximately 90% of the 14.8 million people in the country. They speak the Khmer language, which is part of the larger Mon–Khmer language family found throughout Southeast Asia...
. The theory of Thai migration into Dvaravati has been refuted and is now known to have happened much later.

The term Dvaravati derives from coins which were inscribed in Sanskrit
Sanskrit
Sanskrit , is a historical Indo-Aryan language and the primary liturgical language of Hinduism, Jainism and Buddhism.Buddhism: besides Pali, see Buddhist Hybrid Sanskrit Today, it is listed as one of the 22 scheduled languages of India and is an official language of the state of Uttarakhand...
with śrī
Sri
Sri , also transliterated as Shri or Shree or shre is a word of Sanskrit origin, used in the Indian subcontinent as polite form of address equivalent to the English "Mr." in written and spoken language, or as a title of veneration for deities .-Etymology:Sri has the root meaning of radiance, or...
dvāravatī. The Sanskrit word dvāravatī means "she with many gates " (from dvar "door gate"). Its name may derive from the mythical city of Dvāraka in ancient India.

Little is known about the administration of Dvaravati. It might simply have been a loose gathering of principalities rather than a centralised state, expanding from the coastal area of the upper peninsula to the riverine region of Chao Phraya river. Hinduism
Hinduism
Hinduism is the predominant and indigenous religious tradition of the Indian Subcontinent. Hinduism is known to its followers as , amongst many other expressions...
and Buddhism
Buddhism
Buddhism is a religion and philosophy encompassing a variety of traditions, beliefs and practices, largely based on teachings attributed to Siddhartha Gautama, commonly known as the Buddha . The Buddha lived and taught in the northeastern Indian subcontinent some time between the 6th and 4th...
were significant. The main settlements appear to have been at Nakhon Pathom
Nakhon Pathom Province
Nakhon Pathom ) is one of the central provinces of Thailand. Neighboring provinces are Suphan Buri, Ayutthaya, Nonthaburi, Bangkok, Samut Sakhon, Ratchaburi and Kanchanaburi...
, U Thong
Amphoe U Thong
U Thong is the district in the western part of Suphanburi Province, central Thailand.-History:U Thong is an ancient city. Archaeologists found many pre-historic instruments and human skeletons in many parts of the district. It was one of the center cities of Dvaravati culture...
and Khu Bua
Khu Bua
Khu Bua is an archaeological site 12 km southeast of the town Ratchaburi, Thailand. It dates from the 6th century Dvaravati culture and was one of major cities of this kingdom....
west of the Chao Phraya. Other towns like Lavo (modern-day Lopburi
Lopburi
Lopburi ) is the capital city of Lopburi Province in Thailand. It is located about 150 km north-east of Bangkok. As of 2006 it has a population of 26,500...
) or Si Thep were also clearly influenced by the Dvaravati culture, but probably were not part of the Dvaravati state.

Dvaravati itself was heavily influenced by India
India
India , officially the Republic of India , is a country in South Asia. It is the seventh-largest country by geographical area, the second-most populous country with over 1.2 billion people, and the most populous democracy in the world...
n culture, and played an important role in introducing Buddhism
Buddhism
Buddhism is a religion and philosophy encompassing a variety of traditions, beliefs and practices, largely based on teachings attributed to Siddhartha Gautama, commonly known as the Buddha . The Buddha lived and taught in the northeastern Indian subcontinent some time between the 6th and 4th...
and particularly Buddhist art
Buddhist art
Buddhist art originated on the Indian subcontinent following the historical life of Siddhartha Gautama, 6th to 5th century BC, and thereafter evolved by contact with other cultures as it spread throughout Asia and the world....
to the region.