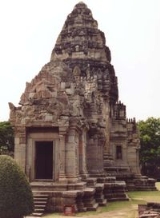 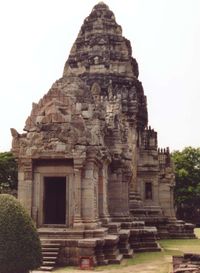 A prang is a tall finger-like spire
Spire
A spire is a tapering conical or pyramidal structure on the top of a building, particularly a church tower. Etymologically, the word is derived from the Old English word spir, meaning a sprout, shoot, or stalk of grass....
, usually richly carved. This was a common feature of Khmer
Khmer people
Khmer people are the predominant ethnic group in Cambodia, accounting for approximately 90% of the 14.8 million people in the country. They speak the Khmer language, which is part of the larger Mon–Khmer language family found throughout Southeast Asia...
religious architecture and was later adopted by Thai
Thailand
Thailand , officially the Kingdom of Thailand , formerly known as Siam , is a country located at the centre of the Indochina peninsula and Southeast Asia. It is bordered to the north by Burma and Laos, to the east by Laos and Cambodia, to the south by the Gulf of Thailand and Malaysia, and to the...
builders, typically in the Ayutthaya
Ayutthaya kingdom
Ayutthaya was a Siamese kingdom that existed from 1350 to 1767. Ayutthaya was friendly towards foreign traders, including the Chinese, Vietnamese , Indians, Japanese and Persians, and later the Portuguese, Spanish, Dutch and French, permitting them to set up villages outside the walls of the...
(1350–1767) and Bangkok periods. In Thailand it appears only with the most important religious buildings
Temple
A temple is a structure reserved for religious or spiritual activities, such as prayer and sacrifice, or analogous rites. A templum constituted a sacred precinct as defined by a priest, or augur. It has the same root as the word "template," a plan in preparation of the building that was marked out...
.

The first Prangs in Thailand were built e.g. in Phimai
Phimai
Phimai is a township in the Nakhon Ratchasima Province in the northeast of Thailand. The town is located at . As of 2005 the town has a population of 9,768...
and Khao Phnom Rung
Phanom Rung historical park
Phanom Rung , or, with its full name, Prasat Hin Phanom Rung , or Prasat Phnom Rong in Khmer, is a Khmer temple complex set on the rim of an extinct volcano at 1,320 feet above sea level, in Buriram province in the Isan region of Thailand. It was built in sandstone and laterite in the 10th to 13th...
and Lopburi
Lopburi
Lopburi ) is the capital city of Lopburi Province in Thailand. It is located about 150 km north-east of Bangkok. As of 2006 it has a population of 26,500...
between the early 10th century and the late 12th century, when the Khmer
Khmer people
Khmer people are the predominant ethnic group in Cambodia, accounting for approximately 90% of the 14.8 million people in the country. They speak the Khmer language, which is part of the larger Mon–Khmer language family found throughout Southeast Asia...
kingdom was dominant. They influenced the old Khmer architect
Architect
An architect is a person trained in the planning, design and oversight of the construction of buildings. To practice architecture means to offer or render services in connection with the design and construction of a building, or group of buildings and the space within the site surrounding the...
, who also built great temple complexes such as Angkor Wat
Angkor Wat
Angkor Wat is a temple complex at Angkor, Cambodia, built for the king Suryavarman II in the early 12th century as his state temple and capital city. As the best-preserved temple at the site, it is the only one to have remained a significant religious centre since its foundation – first Hindu,...
and Angkor Thom
Angkor Thom
Angkor Thom , located in present day Cambodia, was the last and most enduring capital city of the Khmer empire. It was established in the late twelfth century by king Jayavarman VII. It covers an area of 9 km², within which are located several monuments from earlier eras as well as those...
, remarkably resembling north Indian temple
Temple
A temple is a structure reserved for religious or spiritual activities, such as prayer and sacrifice, or analogous rites. A templum constituted a sacred precinct as defined by a priest, or augur. It has the same root as the word "template," a plan in preparation of the building that was marked out...
s, whose Sikhara
Sikhara
Śikhara, a Sanskrit word translating literally to "mountain peak", refers to the rising tower in the Hindu temple architecture of North India. Sikhara over the sanctum sanctorum where the presiding deity is enshrined is the most prominent and visible part of a Hindu temple of North India.In south...
("temple towers", also called Rekha) the Khmer prangs remarkably resemble.

Originally in the Khmer temples Hindu
Hindu
Hindu refers to an identity associated with the philosophical, religious and cultural systems that are indigenous to the Indian subcontinent. As used in the Constitution of India, the word "Hindu" is also attributed to all persons professing any Indian religion...
gods (Shiva
Shiva
Shiva is a major Hindu deity, and is the destroyer god or transformer among the Trimurti, the Hindu Trinity of the primary aspects of the divine. God Shiva is a yogi who has notice of everything that happens in the world and is the main aspect of life. Yet one with great power lives a life of a...
and also Brahma
Brahma
Brahma is the Hindu god of creation and one of the Trimurti, the others being Vishnu and Shiva. According to the Brahma Purana, he is the father of Mānu, and from Mānu all human beings are descended. In the Ramayana and the...
) were worshipped. The areas where the holy tower was (the Cella
Cella
A cella or naos , is the inner chamber of a temple in classical architecture, or a shop facing the street in domestic Roman architecture...
) was relatively small, for two reasons:
The Cella was entered via a small porch, usually aligned to the east, which was called the Mandapa
Mandapa
A mandapa in Indian architecture is a pillared outdoor hall or pavilion for public rituals.-Temple architecture:...
. Over the cubic Cella rose the central tower, the bud
Bud
In botany, a bud is an undeveloped or embryonic shoot and normally occurs in the axil of a leaf or at the tip of the stem. Once formed, a bud may remain for some time in a dormant condition, or it may form a shoot immediately. Buds may be specialized to develop flowers or short shoots, or may have...
-shaped Prang, modeled after the cosmic mountain Meru
Mount Meru (Mythology)
Mount Meru is a sacred mountain in Hindu and Buddhist cosmology as well as in Jain cosmology, and is considered to be the center of all the physical, metaphysical and spiritual universes...
, crowned by a top stone in form of a lotus
Lotus (plant)
Lotus identifies various plant taxa:* Nelumbo, a genus of aquatic plants with showy flowers** Nelumbo nucifera, the Sacred or Indian lotus** Nelumbo lutea, the American or Yellow lotus...
bud.

After the Khmer realm collapsed, the Thai building masters of Sukhothai
Sukhothai kingdom
The Sukhothai Kingdom ) was an early kingdom in the area around the city Sukhothai, in north central Thailand. The Kingdom existed from 1238 till 1438...
adapted the Prang form. They extended and developed it. The building material was no more separate small sandstone blocks, instead the Thais built the Prang in brick or laterite covered with stucco. And the Cella could be reached only by stairs. An example for this is the Prang of the Wat Mahathat
Wat Mahathat
Wat Mahathat is the common short name of several important buddhist temples in Thailand. The name may refer to:* Wat Mahathat Yuwarajarangsarit , Bangkok...
in Phitsanulok
Phitsanulok
Phitsanulok is an important and historic city in lower northern Thailand and is the capital of Phitsanulok Province, which stretches all the way to the Laotian border. Phitsanulok is one of the oldest cities in Thailand, founded over 600 years ago...
. Later developments of the Prang suggested the Cella only. The entrance door became a niche, in which was placed the Buddha statue
Buddharupa
Buddharūpa is the Sanskrit and Pali term used in Buddhism for statues or models of the Buddha.-Commonalities:...
, which had originally taken the central position inside. For reasons of symmetry the niche was repeated on all four sides. On its pinnacle was a Trishul, the "weapon of Indra
Indra
' or is the King of the demi-gods or Devas and Lord of Heaven or Svargaloka in Hindu mythology. He is also the God of War, Storms, and Rainfall.Indra is one of the chief deities in the Rigveda...
".