London Buses is the subsidiary of Transport for London
Transport for London
Transport for London is the local government body responsible for most aspects of the transport system in Greater London in England. Its role is to implement the transport strategy and to manage transport services across London...
(TfL) that manages bus services within Greater London
Greater London
Greater London is the top-level administrative division of England covering London. It was created in 1965 and spans the City of London, including Middle Temple and Inner Temple, and the 32 London boroughs. This territory is coterminate with the London Government Office Region and the London...
, UK. Buses are required to carry similar red colour schemes and conform to the same fare scheme. All services are provided by private sector
Private sector
In economics, the private sector is that part of the economy, sometimes referred to as the citizen sector, which is run by private individuals or groups, usually as a means of enterprise for profit, and is not controlled by the state...
operators.

Transport for London's key areas of direct responsibility through London Buses are the following:

London Buses publishes a variety of bus maps. Some are traditional street maps of London marked with bus numbers. In 2002, TfL introduced the first "spider" maps. Rather than attempting to cover the entire city, these maps are centred on a particular locality or bus station, and convey the route information in the schematic style of Harry Beck's influential tube map
Tube map
The Tube map is a schematic transit map representing the lines and stations of London's rapid transit railway systems, namely the London Underground , the Docklands Light Railway and London Overground....
, capitalising on TfL's iconic style of information design
Information design
Information design is the skill and practice of preparing information so people can use it with efficiency and effectiveness. Where the data is complex or unstructured, a visual representation can express its meaning more clearly to the viewer....
. The arachnoid form of bus routes radiating from a centre earned them the nickname "spider" maps, although TfL refer to them on their website as route maps. The maps are displayed at most major bus stops, and can be downloaded in PDF format via the Internet from the TfL website.

After 1994/5, the LBL company then lay dormant, passing from LRT to TfL. It was resurrected as a place for East Thames Buses
East Thames Buses
East Thames Buses was the only government owned bus operator of London Buses. It was sold to London General in 2009.-History:East Thames Buses was formed in 1999 to take over the services operated by the failed Harris Bus Company...
to exist within TfL, separated by a chinese wall
Chinese wall
In business, a Chinese wall or firewall is an information barrier implemented within a firm to separate and isolate persons who make investment decisions from persons who are privy to undisclosed material information which may influence those decisions...
from LBSL, and acted as a London bus operator by proxy.

The local bus network in London is one of the largest and most comprehensive in the world. Over 6,800 scheduled buses operate on over 700 different routes. Over the year this network carries over 1.8 billion passenger journeys. 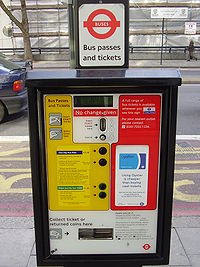 Buses in the London Buses network accept both Travelcard
Travelcard
The Travelcard is an inter-modal travel ticket for unlimited use on the London Underground, London Overground, Docklands Light Railway, Tramlink, London Buses and National Rail services in the Greater London area. Travelcards can be purchased for a period of time varying from one day to a year,...
s and Oyster card
Oyster card
The Oyster card is a form of electronic ticketing used on public transport services within the Greater London area of the United Kingdom. It is promoted by Transport for London and is valid on a number of different travel systems across London including London Underground, buses, the Docklands...
products including bus passes, as well as single cash fare
Fare
A fare is the fee paid by a passenger allowing him or her to make use of a public transport system: rail, bus, taxi, etc. In the case of air transport, the term airfare is often used.-Uses:...
s. Cash fares used to be charged in relation to length of journey (fare stages), but are now charged as single flat fares for any length of journey. From 2000, the flat fare was higher for journeys in Zone 1 than in outer zones, although from 2004 this difference was eliminated, the change coinciding with the introduction of Oyster card flat fares. Cash fares are considerably higher than Oyster fares for the same journey.

With the Oyster card
Oyster card
The Oyster card is a form of electronic ticketing used on public transport services within the Greater London area of the United Kingdom. It is promoted by Transport for London and is valid on a number of different travel systems across London including London Underground, buses, the Docklands...
pay as you go (formerly Pre Pay), users are charged a set amount for single journeys, although there is a "daily cap", which limits the maximum amount of money that will be deducted from the balance on a Pay as you go Oyster card regardless of how many buses are taken that day (from 4.30 am to 4.30 am the next day). Alternatively, weekly and monthly passes may also be purchased and loaded onto an Oyster card.

All children under 11 travel free. Children aged 11 to 15 travel free on buses with an 11-15 Oyster photocard; without an Oystercard or Travelcard, they have to pay the full adult cash fare. There are concessions for people aged 16 to 18.

The Freedom Pass
Freedom Pass
Freedom Pass is a concessionary travel scheme, which began in 1984, to provide free travel to residents of Greater London, England who are aged 60 and over or who have a disability. The scheme is funded by local authorities and coordinated by London Councils...
scheme allows those over 60 and those with a disability to travel free at any time on buses. People who have concessionary bus passes issued by English local authorities travel free on TfL bus services at any time.

On routes throughout London operated by 'bendy' buses and on route W7, passengers who wish to pay cash fares are required to pre-purchase tickets prior to boarding. All bus stops on those routes are equipped with ticket machines which sell single tickets and one-day passes. These route numbers are marked in yellow on bus stop signs with a notice to "buy tickets before boarding" as drivers are unable to issue tickets and also because passengers may board by any door. Furthermore, many bus stops within the West End of London
West End of London
The West End of London is an area of central London, containing many of the city's major tourist attractions, shops, businesses, government buildings, and entertainment . Use of the term began in the early 19th century to describe fashionable areas to the west of Charing Cross...
fall into a "cashless" area. In other places, single tickets may be purchased directly from the bus driver. Most passengers use the Oyster Card, as the cash fare is higher than the Oyster fare.

The various bus operators providing services under contract to London Buses operate a wide variety of vehicles, about the only immediately obvious common feature being their use of a largely red livery. However, London Buses in fact maintains a close control over both the age and specification of the vehicles. Particular examples of this include the use of separate exit doors, increasingly unusual on buses in the United Kingdom outside London, and, on double-deckers, the use of a straight staircase where most other UK operators specify a more compact curved staircase. Additionally, London Buses also specifies that vehicles operating in London use linen roller destination blinds, whereas in most other parts of the country, electronic dot matrix or LED displays are the norm on new buses.

Because of London Buses' close control on the age of the fleet, it is very common for London buses to be cascaded by their owners to operations in other parts of the country after only a few years' service.

The London bus has become an international icon to express a range of ideas. Artist Brian Whelan
Brian Whelan
Brian Whelan is a noted London-Irish painter, author and occasional film maker.-Family life:Brian Francis Whelan was born 3 May 1957 in Ealing, London, of Irish Catholic parents. His father came from Dublin and his mother from Kilkenny...
(whose Father was a bus conductor) uses the red bus in his cityscape paintings to depict street-level London. A revamped London bus has also been used to promote the work of British artist Sir Peter Blake
Peter Blake (artist)
Sir Peter Thomas Blake, KBE, CBE, RDI, RA is an English pop artist, best known for his design of the sleeve for the Beatles' album Sgt. Pepper's Lonely Hearts Club Band. He lives in Chiswick, London, UK.-Career:...
. 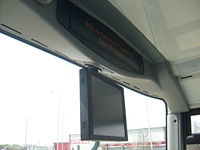