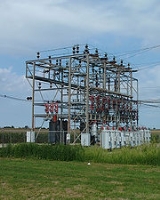 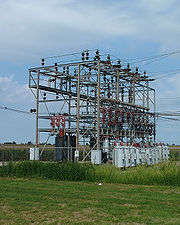 Grid energy storage
Grid energy storage
Grid energy storage refers to the methods used to store electricity on a large scale within an electrical power grid. Electrical energy is stored during times when production exceeds consumption and the stores are used at times when consumption exceeds production...
stores electricity within the transmission grid beyond the customer. Alternatively, the storage can be distributed and involve the customer: for example in storage heater
Storage heater
A storage heater or heat bank is an electrical heater which stores thermal energy during the evening, or at night when base load electricity is available at lower cost, and releases the heat during the day as required.-Principle of operation:...
s running demand-response
Demand response
In electricity grids, demand response is similar to dynamic demand mechanisms to manage customer consumption of electricity in response to supply conditions, for example, having electricity customers reduce their consumption at critical times or in response to market prices...
tariffs such as the United Kingdom's Economy 7
Economy 7
Economy 7 is the name of a differential tariff provided by United Kingdom electricity suppliers that uses base load generation to provide cheap off-peak electricity during the night....
, or in a vehicle-to-grid
Vehicle-to-grid
Vehicle-to-grid describes a system in which plug-in electric vehicles, such as electric cars and plug-in hybrids , communicate with the power grid to sell demand response services by either delivering electricity into the grid or by throttling their charging rate.Vehicle-to-grid can be used with...
system to use storage from electric vehicle
Electric vehicle
An electric vehicle , also referred to as an electric drive vehicle, uses one or more electric motors or traction motors for propulsion...
s during peak times and then replenish it during off peak times. Of course these require incentives for consumers to participate, usually by offering cheaper rates for off peak electricity.

Telephone exchange
Telephone exchange
In the field of telecommunications, a telephone exchange or telephone switch is a system of electronic components that connects telephone calls...
s often have arrays of batteries in their basements to power equipment and in the past metro systems such as the London Underground
London Underground
The London Underground is a rapid transit system serving a large part of Greater London and some parts of Buckinghamshire, Hertfordshire and Essex in England...
had their own power stations, not only giving some redundancy
Redundancy (engineering)
In engineering, redundancy is the duplication of critical components or functions of a system with the intention of increasing reliability of the system, usually in the case of a backup or fail-safe....
but also using the grid for load balancing. Unfortunately today often these supplies of power have been replaced by direct supply from the grid and so are no longer available for the purpose of load balancing.

Future solutions to the load balancing problem focus on "smart grid" technology, in which many consumer and industrial appliances would communicate with the utility using digital means, and could be switched on and off by the utility to run at off-peak hours.

In a very basic demand balancing system, the power company sends a signal down the line or by a dedicated phone chip to turn on a special circuit in the home. Typically, a storage device for space heating or a hot water cylinder will be connected to this circuit. Typically, the electricity is turned on at a given time when the electrical company has observed, historically, that evening peak demand is over and is turned off in the morning before the morning peak demand starts. The cost for such power is less than the "on-demand" power which makes it worthwhile for the user to subscribe to it.

A far more nuanced system is possible with far greater benefits for the power company and the electricity user. Once home devices contain the appropriate electronics, it will no longer be necessary to have devices connected to a special circuit. The power company can send a signal saying that power is now available at a better rate and this signal will turn on any device (dish washer for instance) that has the dial set for "when available" power (priority 2). There is nothing to stop the device manufacturers from having a number of possible priorities on their machines and the power company sending a number of signals as they need more demand to balance supply. You might dial your washing machine to "wash now" (priority 1) if you were in immediate need of clean dishes. You might dial priority 2 so they will be done sometime during the night or priority 3 if you have sufficient dishes for the next meal but given less expensive electricity you would rather have the dishes washed. For a device such as an electric car you might even have a further setting on the dial of "charge and supply" (priority 4) You are going away for a week and are leaving the electric car at home. On "Charge and supply" your car will get charge when electricity is least expensive and send it back when it is most expensive. Your electric car will generate a small but appreciated income while you are away.

Heating devices can have a special setting. You want your dish washer to finish washing once it has started. On the other hand, a hot water cylinder can be turned on and off frequently as power becomes available or unavailable. This might be "priority 5. Your car could also be charged on priority 5.

The power company benefits by being able to sell more of their power. There is no need to let water flow over the spillway or to feather their wind turbines as long as they can turn devices on that will use the excess power when it is available. Also there is less need to build expensive power stations to "peak shave" when there is a high demand for power. If your water cylinder has been heated or your car charged when cheap power was available, you will not be demanding power when it is in short supply.