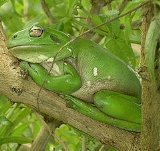 Encyclopedia
Litoria is a genus
Genus
In biology, a genus is a low-level taxonomic rank used in the biological classification of living and fossil organisms, which is an example of definition by genus and differentia...
of Hylidae tree frog
Tree frog
Hylidae is a wide-ranging family of frogs commonly referred to as "tree frogs and their allies". However, the hylids include a diversity of frog species, many of which do not live in trees, but are terrestrial or semi-aquatic.-Characteristics:...
s native to Australia
Australia
Australia , officially the Commonwealth of Australia, is a country in the Southern Hemisphere comprising the mainland of the Australian continent, the island of Tasmania, and numerous smaller islands in the Indian and Pacific Oceans. It is the world's sixth-largest country by total area...
, the Bismarck Archipelago
Bismarck Archipelago
The Bismarck Archipelago is a group of islands off the northeastern coast of New Guinea in the western Pacific Ocean and is part of the Islands Region of Papua New Guinea.-History:...
, the Solomon Islands
Solomon Islands
Solomon Islands is a sovereign state in Oceania, east of Papua New Guinea, consisting of nearly one thousand islands. It covers a land mass of . The capital, Honiara, is located on the island of Guadalcanal...
, New Guinea
New Guinea
New Guinea is the world's second largest island, after Greenland, covering a land area of 786,000 km2. Located in the southwest Pacific Ocean, it lies geographically to the east of the Malay Archipelago, with which it is sometimes included as part of a greater Indo-Australian Archipelago...
, the Lesser Sunda Islands
Lesser Sunda Islands
The Lesser Sunda Islands or Nusa Tenggara are a group of islands in the southern Maritime Southeast Asia, north of Australia. Together with the Greater Sunda Islands to the west they make up the Sunda Islands...
, the Moluccan Islands
Maluku Islands
The Maluku Islands are an archipelago that is part of Indonesia, and part of the larger Maritime Southeast Asia region. Tectonically they are located on the Halmahera Plate within the Molucca Sea Collision Zone...
, and Timor
Timor
Timor is an island at the southern end of Maritime Southeast Asia, north of the Timor Sea. It is divided between the independent state of East Timor, and West Timor, belonging to the Indonesian province of East Nusa Tenggara. The island's surface is 30,777 square kilometres...
. They are sometimes collectively referred to as Australasian treefrogs. They are distinguishable from other tree frogs by the presence of horizontal irises, no pigmentation of the eyelid and their Wallacea
Wallacea
Wallacea is a biogeographical designation for a group of Indonesian islands separated by deep water straits from the Asian and Australian continental shelves. Wallacea includes Sulawesi, the largest island in the group, as well as Lombok, Sumbawa, Flores, Sumba, Timor, Halmahera, Buru, Seram, and...
n distribution. There are (as of mid-2008) almost 150 species
Species
In biology, a species is one of the basic units of biological classification and a taxonomic rank. A species is often defined as a group of organisms capable of interbreeding and producing fertile offspring. While in many cases this definition is adequate, more precise or differing measures are...
, but as several new species are described every year on average, by 2010 the number of known species is likely to exceed 150.

The species within the genus Litoria are extremely variable in appearance, behaviour and habitat
Habitat
* Habitat , a place where a species lives and grows*Human habitat, a place where humans live, work or play** Space habitat, a space station intended as a permanent settlement...
. The smallest species within the genus is the Javelin Frog
Javelin Frog
The Javelin Frog is a species of frog in the Hylidae family.It is endemic to Australia.Its natural habitats are subtropical or tropical dry lowland grassland, swamps, and intermittent freshwater marshes.-References:...
(Litoria microbelos), reaching a maximum length of 1.6 centimeters, while the largest, the Giant Tree Frog
Giant Tree Frog
The White-lipped Tree Frog , also known as the Giant Tree Frog, is the world's largest tree frog. This species is native to the rainforests of Northern Queensland, New Guinea, the Bismarck Islands and the Admiralty Islands....
(Litoria infrafrenata), reaches a size 13.5 centimeters. The appearance, behaviour and habitat of each frog is usually linked. The small, darkly coloured frogs are generally terrestrial, and will never, or infrequently, climb. The larger, green species are usually arboreal and some will only venture to the ground to breed.
The source of this article is wikipedia, the free encyclopedia.  The text of this article is licensed under the GFDL.