Encyclopedia
The White-lipped Tree Frog (Litoria infrafrenata), also known as the Giant Tree Frog, is the world's largest tree frog
Tree frog
Hylidae is a wide-ranging family of frogs commonly referred to as "tree frogs and their allies". However, the hylids include a diversity of frog species, many of which do not live in trees, but are terrestrial or semi-aquatic.-Characteristics:...
. This species is native to the rainforests of Northern Queensland
Queensland
Queensland is a state of Australia, occupying the north-eastern section of the mainland continent. It is bordered by the Northern Territory, South Australia and New South Wales to the west, south-west and south respectively. To the east, Queensland is bordered by the Coral Sea and Pacific Ocean...
, New Guinea
New Guinea
New Guinea is the world's second largest island, after Greenland, covering a land area of 786,000 km2. Located in the southwest Pacific Ocean, it lies geographically to the east of the Malay Archipelago, with which it is sometimes included as part of a greater Indo-Australian Archipelago...
, the Bismarck Islands and the Admiralty Islands
Admiralty Islands
The Admiralty Islands are a group of eighteen islands in the Bismarck Archipelago, to the north of New Guinea in the south Pacific Ocean. These are also sometimes called the Manus Islands, after the largest island. These rainforest-covered islands form part of Manus Province, the smallest and...
. 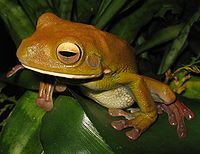 The White-lipped Tree Frog can reach a length of over 13 centimeters (5 inches). Females are larger than males, and the males usually reach only 10 centimetres (4 inches). Its dorsal
Dorsum (biology)
In anatomy, the dorsum is the upper side of animals that typically run, fly, or swim in a horizontal position, and the back side of animals that walk upright. In vertebrates the dorsum contains the backbone. The term dorsal refers to anatomical structures that are either situated toward or grow...
surface is usually bright green, although the colour changes depending on the temperature and background, and can be brown. The ventral surface is off-white. The lower lip has a distinctive white stripe (giving this species its name) which continues to the shoulder. There are white stripes on the trailing edges of the lower leg, which may turn pink in the breeding male. The White-lipped Tree Frog has large toe pads, which aid it to climb. The toes are completely webbed, and the hands partially webbed. 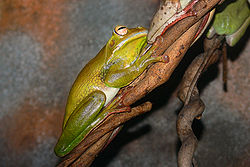 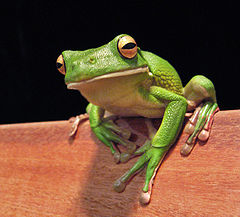 The White-lipped Tree Frog is distributed in Australia
Australia
Australia , officially the Commonwealth of Australia, is a country in the Southern Hemisphere comprising the mainland of the Australian continent, the island of Tasmania, and numerous smaller islands in the Indian and Pacific Oceans. It is the world's sixth-largest country by total area...
along the coastal areas of Cape York Peninsula
Cape York Peninsula
Cape York Peninsula is a large remote peninsula located in Far North Queensland at the tip of the state of Queensland, Australia, the largest unspoilt wilderness in northern Australia and one of the last remaining wilderness areas on Earth...
and the wet tropics of north-eastern Queensland. It is the most widely distributed tree frog in the New Guinea region, spanning from eastern Indonesia
Indonesia
Indonesia , officially the Republic of Indonesia , is a country in Southeast Asia and Oceania. Indonesia is an archipelago comprising approximately 13,000 islands. It has 33 provinces with over 238 million people, and is the world's fourth most populous country. Indonesia is a republic, with an...
, through the New Guinea mainland, to the Bismarck and the Admiralty Islands in the north. It lives in rainforest
Rainforest
Rainforests are forests characterized by high rainfall, with definitions based on a minimum normal annual rainfall of 1750-2000 mm...
, cultivated areas and around houses in coastal areas, and is restricted to areas below 1200 metres in altitude.

It has a loud, barking call but when distressed it makes a cat-like "mew" sound. Males call during spring and summer after rain from vegetation around the breeding site, normally a still body of water.

Its diet is mainly insects and other arthropods. It can live to over ten years in the wild.

This species of frog is known for being moved around in fruit produce from northern Australia and ending up becoming a lost frog
Lost frog
Lost frogs is a term given to frogs which have been, usually accidentally, outside of their original distribution.The term mainly applies to Australia, due to the large amount of frogs accidentally while hiding in fruit produce, flowers and building and landscape supplies...
in southern areas.

It is kept as a pet, in Australia this animal may be kept in captivity with the appropriate permit.