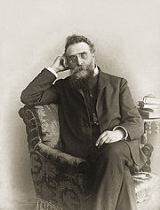 The revival was predated by a short period of early 19th century known as the "Samogitia
Samogitia
Samogitia is one of the five ethnographic regions of Lithuania. It is located in northwestern Lithuania. Its largest city is Šiauliai/Šiaulē. The region has a long and distinct cultural history, reflected in the existence of the Samogitian dialect...
n revival" led by students of Vilnius University
Vilnius University
Vilnius University is the oldest university in the Baltic states and one of the oldest in Eastern Europe. It is also the largest university in Lithuania....
Simonas Daukantas
Simonas Daukantas
Simonas Daukantas or Szymon Dowkont was a Lithuanian writer, ethnographer and historian. One of the pioneers of the Lithuanian national revival, he is credited as an author of the first book on the history of Lithuania written in the Lithuanian language...
and Simonas Stanevičius
Simonas Stanevicius
Simonas Stanevičius was a Lithuanian writer and an activist of the "Samogitian Revival", an early stage of the Lithuanian National Revival.-Biography:...
among others. Most recent Lithuanian national revival may be linked to the late 20th century developments also known as the Singing Revolution
Singing Revolution
The Singing Revolution is a commonly used name for events between 1987 and 1991 that led to the restoration of the independence of Estonia, Latvia and Lithuania...
. 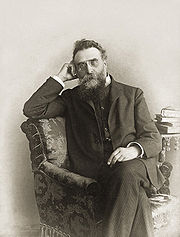 Due to a long period of common Polish-Lithuanian
Polish-Lithuanian Union
The term Polish–Lithuanian Union sometimes called as United Kingdom of Poland and Lithuania refers to a series of acts and alliances between the Kingdom of Poland and the Grand Duchy of Lithuania that lasted for prolonged periods of time and led to the creation of the Polish–Lithuanian...
statehood and nationality, and the Russian Empire
Russian Empire
The Russian Empire was a state that existed from 1721 until the Russian Revolution of 1917. It was the successor to the Tsardom of Russia and the predecessor of the Soviet Union...
's policy of Russification
Russification
Russification is an adoption of the Russian language or some other Russian attributes by non-Russian communities...
many of the Lithuanian nobles in the 19th century had become Polonized
Polonization
Polonization was the acquisition or imposition of elements of Polish culture, in particular, Polish language, as experienced in some historic periods by non-Polish populations of territories controlled or substantially influenced by Poland...
and the language was generally used only by the poor and by the middle classes; some of the latter tended to use Polish for "prestige". Lithuanian was generally a spoken language and was not considered prestigious enough for written usage; it was, however, retained by some members of the minor nobility, especially in the Samogitia
Samogitia
Samogitia is one of the five ethnographic regions of Lithuania. It is located in northwestern Lithuania. Its largest city is Šiauliai/Šiaulē. The region has a long and distinct cultural history, reflected in the existence of the Samogitian dialect...
n region. The language was not yet standardized; its grammar varied greatly from region to region
Regions of Lithuania
Lithuania can be divided into historical and cultural regions . The exact borders are not fully clear, as the regions are not official political or administrative units. They are delimited by culture, such as country traditions, traditional lifestyle, songs, tales, etc. To some extent regions...
in form of Aukštaitija
Aukštaitija
Aukštaitija is the name of one of five ethnographic regions of Lithuania. The name comes from the relatively high elevation of the region, particularly the eastern parts.-Geography:...
n and Samogitian dialects and their sub-dialects. There were even expectations that the Lithuanian language
Lithuanian language
Lithuanian is the official state language of Lithuania and is recognized as one of the official languages of the European Union. There are about 2.96 million native Lithuanian speakers in Lithuania and about 170,000 abroad. Lithuanian is a Baltic language, closely related to Latvian, although they...
would become extinct, as the eastern territories within what is modern-day Lithuania and northwestern Belarus
Belarus
Belarus , officially the Republic of Belarus, is a landlocked country in Eastern Europe, bordered clockwise by Russia to the northeast, Ukraine to the south, Poland to the west, and Lithuania and Latvia to the northwest. Its capital is Minsk; other major cities include Brest, Grodno , Gomel ,...
became increasingly Slavicized, and many people used Polish
Polish language
Polish is a language of the Lechitic subgroup of West Slavic languages, used throughout Poland and by Polish minorities in other countries...
or Belarusian
Belarusian language
The Belarusian language , sometimes referred to as White Russian or White Ruthenian, is the language of the Belarusian people...
in their daily lives. At the beginning of the 19th century, use of the Lithuanian language was largely limited to Lithuanian rural areas; the only area where Lithuanian was considered suitable for literature was German-controlled Lithuania Minor
Lithuania Minor
Lithuania Minor or Prussian Lithuania is a historical ethnographic region of Prussia, later East Prussia in Germany, where Prussian Lithuanians or Lietuvininkai lived. Lithuania Minor enclosed the northern part of this province and got its name due to the territory's substantial...
in East Prussia
East Prussia
East Prussia is the main part of the region of Prussia along the southeastern Baltic Coast from the 13th century to the end of World War II in May 1945. From 1772–1829 and 1878–1945, the Province of East Prussia was part of the German state of Prussia. The capital city was Königsberg.East Prussia...
. Even here, an influx of German immigrants threatened the native language and Prussian Lithuanian culture.

Several factors contributed to its subsequent revival: the language drew attention from scholars of the emerging science of comparative linguistics
Comparative linguistics
Comparative linguistics is a branch of historical linguistics that is concerned with comparing languages to establish their historical relatedness....
; after the abolition of serfdom in the Russian Empire in 1861
Emancipation reform of 1861
The Emancipation Reform of 1861 in Russia was the first and most important of liberal reforms effected during the reign of Alexander II of Russia. The reform, together with a related reform in 1861, amounted to the liquidation of serf dependence previously suffered by peasants of the Russian Empire...
, social mobility
Social mobility
Social mobility refers to the movement of people in a population from one social class or economic level to another. It typically refers to vertical mobility -- movement of individuals or groups up from one socio-economic level to another, often by changing jobs or marrying; but can also refer to...
increased, and Lithuanian intellectuals arose from the ranks of the rural populace; and language became associated with identity in Lithuania, as elsewhere across Europe. Within the Catholic Church, the barriers that had earlier prevented commoners from entering the priesthood were eased. A closer relationship developed between the educated clergy, who were increasingly of ethnic Lithuanian stock, and their parishioners, including a sympathy with their wish to use the Lithuanian language. The emerging national movement sought to distance itself from both Polish and Russia
Russia
Russia or , officially known as both Russia and the Russian Federation , is a country in northern Eurasia. It is a federal semi-presidential republic, comprising 83 federal subjects...
n influences, and the use of the Lithuanian language was seen as an important aspect of this movement. 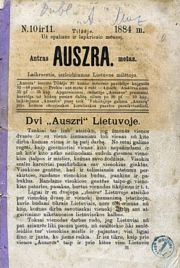 The development of Lithuanian national culture and national identity was further burdened by the Lithuanian press ban
Lithuanian press ban
The Lithuanian press ban was a ban on all Lithuanian language publications printed in the Latin alphabet within the Russian Empire, which controlled Lithuania at the time. Lithuanian-language publications that used the Cyrillic alphabet were allowed and even encouraged...
, one of the repression measures that followed the 1863 uprising
January Uprising
The January Uprising was an uprising in the former Polish-Lithuanian Commonwealth against the Russian Empire...
. After the uprising serfdom
Serfdom
Serfdom is the status of peasants under feudalism, specifically relating to Manorialism. It was a condition of bondage or modified slavery which developed primarily during the High Middle Ages in Europe and lasted to the mid-19th century...
was finally abandoned. The revival started among young educated people of Lithuanian extraction who attended higher education studies at the universities of the Russian Empire and foreign states. Many were of wealthy farmers origin and thus, having come from the peasant class, least affected by Polonisation. The movement resulted in the release of Lithuanian newspapers, Aušra
Aušra
Aušra or Auszra was the first national Lithuanian newspaper. The first issue was published in 1883, in Ragnit, East Prussia, Germany East Prussia's ethnolinguistic part - Lithuania Minor. Later it was published monthly in Tilsit...
and Varpas
Varpas
Varpas was a monthly Lithuanian-language newspaper published during the Lithuanian press ban from January 1889 to December 1905...
, followed by the writing of poems and books in Lithuanian. These writings romanticized the past of the Grand Duchy of Lithuania
Grand Duchy of Lithuania
The Grand Duchy of Lithuania was a European state from the 12th /13th century until 1569 and then as a constituent part of Polish-Lithuanian Commonwealth until 1791 when Constitution of May 3, 1791 abolished it in favor of unitary state. It was founded by the Lithuanians, one of the polytheistic...
, depicting the nation of great power and with many heroes.

The revival spearheaded the independence movement, with various organisations opposing Russian influence. Russian policy became harsher in response and there are known to have been attacks against Catholic churches, while a ban of the Lithuanian press still continued. Even in the situation of a press ban, the literacy of Lithuanians continued to rise significantly and was one of the greatest among the nations in the Russian Empire, behind only Finns, Estonians
Estonians
Estonians are a Finnic people closely related to the Finns and inhabiting, primarily, the country of Estonia. They speak a Finnic language known as Estonian...
and Latvians
Latvians
Latvians or Letts are the indigenous Baltic people of Latvia.-History:Latvians occasionally refer to themselves by the ancient name of Latvji, which may have originated from the word Latve which is a name of the river that presumably flowed through what is now eastern Latvia...
. The political Lithuanian nation has already been formed by the turn of the centuries; political claims were vocalized in the Great Seimas of Vilnius
Great Seimas of Vilnius
The Great Seimas of Vilnius , was a major assembly held on December 4 and 5, 1905 in Vilnius, Lithuania, then part of the Russian Empire, largely inspired by the Russian Revolution of 1905. It was the first modern national congress in Lithuania and dealt primarily not with the social issues that...
and political and cultural activity continued to grow after the press ban was lifted in 1904.
The source of this article is wikipedia, the free encyclopedia.  The text of this article is licensed under the GFDL.