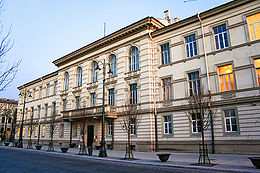 The Lithuanian Academy of Music and Theatre in Vilnius
Vilnius
Vilnius is the capital of Lithuania, and its largest city, with a population of 560,190 as of 2010. It is the seat of the Vilnius city municipality and of the Vilnius district municipality. It is also the capital of Vilnius County...
, Lithuania
Lithuania
Lithuania , officially the Republic of Lithuania is a country in Northern Europe, the biggest of the three Baltic states. It is situated along the southeastern shore of the Baltic Sea, whereby to the west lie Sweden and Denmark...
, is a state-supported conservatory that trains students in music, theatre, and multimedia arts. 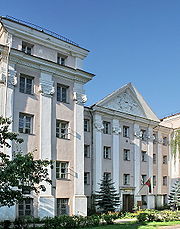 As of January 2005 there were 1,167 students at the Academy, taught by a staff of 274. Its rector
Rector
The word rector has a number of different meanings; it is widely used to refer to an academic, religious or political administrator...
in 2007, Professor Eduardas Gabnys, has served in that capacity since 2005. The Academy's headquarters are located on Gediminas Avenue
Gediminas Avenue
Gediminas Avenue is the main street of Vilnius, where most of the governmental institutions of Lithuania are concentrated, including the government, parliament, Constitutional Court and ministries...
.

The Academy awards the following degrees: Bachelor of Arts
Bachelor of Arts
A Bachelor of Arts , from the Latin artium baccalaureus, is a bachelor's degree awarded for an undergraduate course or program in either the liberal arts, the sciences, or both...
in Music, BA in Theatre, BA in Multimedia Arts, Master of Arts
Master of Arts (postgraduate)
A Master of Arts from the Latin Magister Artium, is a type of Master's degree awarded by universities in many countries. The M.A. is usually contrasted with the M.S. or M.Sc. degrees...
in Music, MA in Theatre, MA in Multimedia Arts, Ph.D
Doctor of Philosophy
Doctor of Philosophy, abbreviated as Ph.D., PhD, D.Phil., or DPhil , in English-speaking countries, is a postgraduate academic degree awarded by universities...
. in Humanities for students of musicology, ethnomusicology, theatre theory and history, and a 2-year postgraduate Art Licentiate degree for music performers, composers and directors.

The Academy strives to "develop international cooperation and integration into the European and global academic community, to support and facilitate student and teacher exchange, and to ensure high-quality standards in higher education in the arts."

Its students and professors perform in over 400 concerts per year, participatiing in national and international orchestras, international concerts, performances, competitions, and festivals. Competitions and international events sponsored by the Academy include the International Jascha Heifetz
Jascha Heifetz
Jascha Heifetz was a violinist, born in Vilnius, then Russian Empire, now Lithuania. He is widely regarded as one of the greatest violinists of all time.- Early life :...
Violin Competition, and an international competition for singers and pianists-accompanists, among others. It co-sponsors the International M. K. Čiurlionis
Mikalojus Konstantinas Ciurlionis
Mikalojus Konstantinas Čiurlionis , also known as M. K. Čiurlionis was a Lithuanian painter and composer. Čiurlionis contributed to symbolism and art nouveau and was representative of the fin de siècle epoch. During his short life he composed about 250 pieces of music and created about 300 paintings...
Piano and Organ Competition and hosts national auditions for participation in the European Union Youth Orchestra
European Union Youth Orchestra
The European Union Youth Orchestra is a training orchestra for young people in the European Union. It is funded centrally by the European Union and by a number of EU member states...
, the International Choir and Orchestra Academy in Stuttgart
Stuttgart
Stuttgart is the capital of the state of Baden-Württemberg in southern Germany. The sixth-largest city in Germany, Stuttgart has a population of 600,038 while the metropolitan area has a population of 5.3 million ....
, the International Holland Music Sessions, and numerous other scholarship auditions.

Other bilateral or multilateral agreements have been signed with the Belarus
Belarus
Belarus , officially the Republic of Belarus, is a landlocked country in Eastern Europe, bordered clockwise by Russia to the northeast, Ukraine to the south, Poland to the west, and Lithuania and Latvia to the northwest. Its capital is Minsk; other major cities include Brest, Grodno , Gomel ,...
ian State Academy of Music, Moscow
Moscow
Moscow is the capital, the most populous city, and the most populous federal subject of Russia. The city is a major political, economic, cultural, scientific, religious, financial, educational, and transportation centre of Russia and the continent...
's Tchaikovsky Conservatory and its Slavic Traditional Music School, the
Rimsky-Korsakov
Nikolai Rimsky-Korsakov
Nikolai Andreyevich Rimsky-Korsakov was a Russian composer, and a member of the group of composers known as The Five.The Five, also known as The Mighty Handful or The Mighty Coterie, refers to a circle of composers who met in Saint Petersburg, Russia, in the years 1856–1870: Mily Balakirev , César...
Saint Petersburg
Saint Petersburg
Saint Petersburg is a city and a federal subject of Russia located on the Neva River at the head of the Gulf of Finland on the Baltic Sea...
State Conservatory, and the University of Kansas
University of Kansas
The University of Kansas is a public research university and the largest university in the state of Kansas. KU campuses are located in Lawrence, Wichita, Overland Park, and Kansas City, Kansas with the main campus being located in Lawrence on Mount Oread, the highest point in Lawrence. The...
.