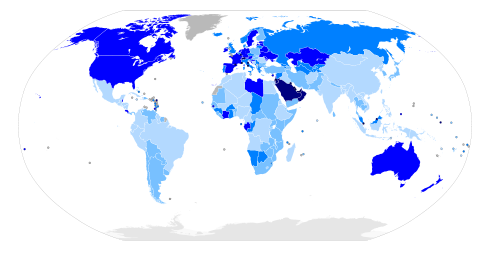 Western Sahara did not supply data. (Western Sahara
Western Sahara
Western Sahara is a disputed territory in North Africa, bordered by Morocco to the north, Algeria to the northeast, Mauritania to the east and south, and the Atlantic Ocean to the west. Its surface area amounts to . It is one of the most sparsely populated territories in the world, mainly...
is under military occupation
Military occupation
Military occupation occurs when the control and authority over a territory passes to a hostile army. The territory then becomes occupied territory.-Military occupation and the laws of war:...
by Morocco
Morocco
Morocco , officially the Kingdom of Morocco , is a country located in North Africa. It has a population of more than 32 million and an area of 710,850 km², and also primarily administers the disputed region of the Western Sahara...
. Immigration to the Moroccan-administered region
Southern Provinces
The Southern Provinces or Moroccan Sahara are the terms used by Morocco for Western Sahara, in reference to the part of Western Sahara that lies to the west of the Moroccan Berm...
is primarily Moroccan settlers. The area
Free Zone (region)
The Free Zone or Liberated Territories is a term used by the Polisario Front to describe the part of Western Sahara that lies to the east of the Moroccan Berm and west and north of the borders with Algeria and Mauritania, respectively...
administered by the Sahrawi Arab Democratic Republic
Sahrawi Arab Democratic Republic
The Sahrawi Arab Democratic Republic is a partially recognised state that claims sovereignty over the entire territory of Western Sahara, a former Spanish colony. SADR was proclaimed by the Polisario Front on February 27, 1976, in Bir Lehlu, Western Sahara. The SADR government controls about...
is sparsely populated.)
The source of this article is wikipedia, the free encyclopedia.  The text of this article is licensed under the GFDL.