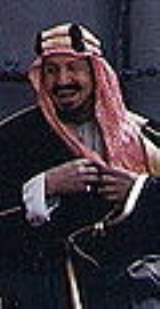 Encyclopedia
The King of Saudi Arabia is Saudi Arabia
Saudi Arabia
The Kingdom of Saudi Arabia , commonly known in British English as Saudi Arabia and in Arabic as as-Sa‘ūdiyyah , is the largest state in Western Asia by land area, constituting the bulk of the Arabian Peninsula, and the second-largest in the Arab World...
's head of state
Head of State
A head of state is the individual that serves as the chief public representative of a monarchy, republic, federation, commonwealth or other kind of state. His or her role generally includes legitimizing the state and exercising the political powers, functions, and duties granted to the head of...
and absolute monarch. He serves as the head of the Saudi monarchy — House of Saud
House of Saud
The House of Saud , also called the Al Saud, is the ruling royal family of Saudi Arabia and one of the wealthiest and most powerful dynasties in the world. The family holds thousands of members...
. The King is called the Custodian of the Two Holy Mosques
Custodian of the Two Holy Mosques
Custodian of the Two Holy Mosques , a historical term, was a pious title taken by the Ayyubids, the Mamluk Sultans of Egypt, and the Ottoman Sultans; it has been revived by modern Saudi kings.-Saudi monarchy:...
(خادم الحرمين الشريفين). The title, which signifies Saudi Arabia's jurisdiction over the mosques of Masjid al Haram in Mecca
Mecca
Mecca is a city in the Hijaz and the capital of Makkah province in Saudi Arabia. The city is located inland from Jeddah in a narrow valley at a height of above sea level...
and Masjid al-Nabawi in Medina
Medina
Medina , or ; also transliterated as Madinah, or madinat al-nabi "the city of the prophet") is a city in the Hejaz region of western Saudi Arabia, and serves as the capital of the Al Madinah Province. It is the second holiest city in Islam, and the burial place of the Islamic Prophet Muhammad, and...
, replaced His Majesty
Majesty
Majesty is an English word derived ultimately from the Latin maiestas, meaning "greatness".- Origin :Originally, during the Roman republic, the word maiestas was the legal term for the supreme status and dignity of the state, to be respected above everything else...
(صاحب الجلالة) in 1986.

King Abdul-Aziz began conquering today's Saudi Arabia in 1902, by restoring his family as emirs of Riyadh
Riyadh
Riyadh is the capital and largest city of Saudi Arabia. It is also the capital of Riyadh Province, and belongs to the historical regions of Najd and Al-Yamama. It is situated in the center of the Arabian Peninsula on a large plateau, and is home to 5,254,560 people, and the urban center of a...
. He then proceeded to conquer first the Nejd (1922) and then the Hejaz
Hejaz
al-Hejaz, also Hijaz is a region in the west of present-day Saudi Arabia. Defined primarily by its western border on the Red Sea, it extends from Haql on the Gulf of Aqaba to Jizan. Its main city is Jeddah, but it is probably better known for the Islamic holy cities of Mecca and Medina...
(1925). He progressed from Sultan of Nejd, to King of Hejaz and Nejd, and finally to King of Saudi Arabia in 1932.

The other kings have all been his sons and all likely immediate successors to the reigning King Abdullah will be from his progeny. Sons of Ibn Saud are considered to have primary claim on the Kingship of Saudi Arabia. This makes the Saudi Monarchy quite distinct from Western monarchies, which usually feature large, clearly defined royal families and orders of succession.

Saudi Arabia is ruled by Islamic law and purports to be an Islamic state, but many Muslims see a hereditary monarchy as being a discouraged system of government in Islam
Islam
Islam . The most common are and .   : Arabic pronunciation varies regionally. The first vowel ranges from ~~. The second vowel ranges from ~~~...
.


House of Saud
House of Saud
The House of Saud , also called the Al Saud, is the ruling royal family of Saudi Arabia and one of the wealthiest and most powerful dynasties in the world. The family holds thousands of members...