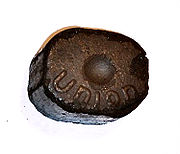 The energy content of lignite ranges from (9-17 million BTU
British thermal unit
The British thermal unit is a traditional unit of energy equal to about 1055 joules. It is approximately the amount of energy needed to heat of water, which is exactly one tenth of a UK gallon or about 0.1198 US gallons, from 39°F to 40°F...
per short ton
Short ton
The short ton is a unit of mass equal to . In the United States it is often called simply ton without distinguishing it from the metric ton or the long ton ; rather, the other two are specifically noted. There are, however, some U.S...
) on a moist, mineral-matter-free basis. The energy content of lignite consumed in the United States averages (13 million BTU/ton), on the as-received basis (i.e., containing both inherent moisture and mineral matter). The energy content of lignite consumed in Victoria, Australia averages (6.5 million BTU/ton). When reacted with quaternary amine
Quaternary ammonium cation
Quaternary ammonium cations, also known as quats, are positively charged polyatomic ions of the structure NR4+, R being an alkyl group or an aryl group. Unlike the ammonium ion and the primary, secondary, or tertiary ammonium cations, the quaternary ammonium cations are permanently charged,...
, amine treated lignite (ATL) forms. ATL is used in drilling mud to reduce fluid loss.

Lignite has a high content of volatile matter which makes it easier to convert into gas and liquid petroleum products than higher ranking coals. However, its high moisture content and susceptibility to spontaneous combustion
Spontaneous combustion
Spontaneous combustion is the self-ignition of a mass, for example, a pile of oily rags. Allegedly, humans can also ignite and burn without an obvious cause; this phenomenon is known as spontaneous human combustion....
can cause problems in transportation and storage. However, it is now known that efficient processes that remove latent moisture locked within the structure of brown coal will relegate the risk of spontaneous combustion to the same level as black coal, will transform the calorific value of brown coal to a black coal equivalent
Black coal equivalent
Black coal equivalent is a term applied to describe the properties of an export coal product derived from the Coldry Process, a patented coal upgrading technology operated by Environmental Clean Technologies Limited, in Victoria, Australia...
fuel while significantly reducing the emissions profile of 'densified' brown coal to a level similar to or better than most black coals.

Because of its low energy density and typically high moisture content, brown coal is inefficient to transport and is not traded extensively on the world market compared with higher coal grades. It is often burned in power stations constructed very close to any mines, such as in Australia's Latrobe Valley
Latrobe Valley
The Latrobe Valley is an inland geographical region and urban area of Gippsland in the state of Victoria, Australia. It is east of the City Of Melbourne and nestled between the Strzelecki Ranges to the south and the Great Dividing Range to the north – with the highest peak to the north of the...
and Luminant
Luminant
Luminant is a Texas-based electric utility. It is a wholly owned subsidiary of Energy Future Holdings Corporation. Luminant's operations include electricity generation and wholesaling, mining, construction, and development...
's Monticello plant
Monticello Steam Electric Station
The Monticello Steam Electric Station is a three unit coal-fired power plant located in Titus County, Texas. Unit 1 of the Monticello Steam Electric Station began operation in 1974, unit 2 became operational in 1975, and unit 3, became operational in 1978. The plant produces electricity by burning...
in Texas. Primarily because of latent high moisture content of brown coal, carbon dioxide emissions from traditional brown coal fired plants are generally much higher than for comparable black coal plants, with the world's highest emitting being Hazelwood Power Station, Victoria
Hazelwood Power Station, Victoria
Hazelwood Power Station, in the Latrobe Valley, Victoria, Australia is a brown coal fueled base-load power station built between 1964 and 1971. The power station is of 1,600 megawatt capacity, and supplies up to 25% of Victoria's base load electricity and more than 5% of Australia's total energy...
. The operation of traditional brown coal plants, particularly in combination with strip mining, can be politically contentious due to environmental concerns.

Lignite is geologically younger than higher-grade coals, originating mainly in the Tertiary
Tertiary
The Tertiary is a deprecated term for a geologic period 65 million to 2.6 million years ago. The Tertiary covered the time span between the superseded Secondary period and the Quaternary...
period.

The Latrobe Valley
Latrobe Valley
The Latrobe Valley is an inland geographical region and urban area of Gippsland in the state of Victoria, Australia. It is east of the City Of Melbourne and nestled between the Strzelecki Ranges to the south and the Great Dividing Range to the north – with the highest peak to the north of the...
in the state of Victoria
Victoria (Australia)
Victoria is the second most populous state in Australia. Geographically the smallest mainland state, Victoria is bordered by New South Wales, South Australia, and Tasmania on Boundary Islet to the north, west and south respectively....
, Australia contains estimated reserves of some 200,000 million tonnes (Mt) of brown coal. The deposit is equivalent to 25% of known world reserves. The coal seams are generally of considerable thickness (to 300 metres) and are covered by very little overburden
Overburden
Overburden is the material that lies above an area of economic or scientific interest in mining and archaeology; most commonly the rock, soil, and ecosystem that lies above a coal seam or ore body. It is also known as 'waste' or 'spoil'...
(2 to 5 metres).

Although xyloid lignite may sometimes have the tenacity and the appearance of ordinary wood it can be seen that the combustible woody tissue has experienced a great modification. It is reducible to a fine powder by trituration
Trituration
Trituration is the name of several different methods of processing materials. Trituration is also the name of the process for reducing the particle size of a substance by grinding, as by grinding of powders in a mortar with a pestle. Trituration additionally refers to the production of a...
and if submitted to the action of a weak solution of potash
Potash
Potash is the common name for various mined and manufactured salts that contain potassium in water-soluble form. In some rare cases, potash can be formed with traces of organic materials such as plant remains, and this was the major historical source for it before the industrial era...
it yields a considerable quantity of ulmic acid
Humic acid
Humic acid is a principal component of humic substances, which are the major organic constituents of soil , peat, coal, many upland streams, dystrophic lakes, and ocean water. It is produced by biodegradation of dead organic matter...
.