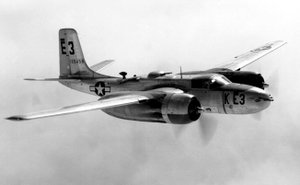 Light bombers of World War I
World War I
World War I , which was predominantly called the World War or the Great War from its occurrence until 1939, and the First World War or World War I thereafter, was a major war centred in Europe that began on 28 July 1914 and lasted until 11 November 1918...
were single-engine
Reciprocating engine
A reciprocating engine, also often known as a piston engine, is a heat engine that uses one or more reciprocating pistons to convert pressure into a rotating motion. This article describes the common features of all types...
aircraft with a bomb
Aerial bomb
An aerial bomb is a type of explosive weapon intended to travel through the air with predictable trajectories, usually designed to be dropped from an aircraft...
load of about 50–400 kg. One of the most famous was the Airco DH.4 designed by Geoffrey de Havilland
Geoffrey de Havilland
Captain Sir Geoffrey de Havilland, OM, CBE, AFC, RDI, FRAeS, was a British aviation pioneer and aircraft engineer...
. They could often also serve as reconnaissance
Reconnaissance
Reconnaissance is the military term for exploring beyond the area occupied by friendly forces to gain information about enemy forces or features of the environment....
aircraft
Fixed-wing aircraft
A fixed-wing aircraft is an aircraft capable of flight using wings that generate lift due to the vehicle's forward airspeed. Fixed-wing aircraft are distinct from rotary-wing aircraft in which wings rotate about a fixed mast and ornithopters in which lift is generated by flapping wings.A powered...
(for example the Avro 504
Avro 504
The Avro 504 was a World War I biplane aircraft made by the Avro aircraft company and under licence by others. Production during the War totalled 8,970 and continued for almost 20 years, making it the most-produced aircraft of any kind that served in World War I, in any military capacity, during...
).

Prior to World War II, engine
Reciprocating engine
A reciprocating engine, also often known as a piston engine, is a heat engine that uses one or more reciprocating pistons to convert pressure into a rotating motion. This article describes the common features of all types...
power was so meager that there were several types of bombers: light, medium
Medium bomber
A medium bomber is a bomber aircraft designed to operate with medium bombloads over medium distances; the name serves to distinguish them from the larger heavy bombers and smaller light bombers...
, and heavy
Heavy bomber
A heavy bomber is a bomber aircraft of the largest size and load carrying capacity, and usually the longest range.In New START, the term "heavy bomber" is used for two types of bombers:*one with a range greater than 8,000 kilometers...
, each tuned to a particular performance and mission niche. As fighter
Fighter aircraft
A fighter aircraft is a military aircraft designed primarily for air-to-air combat with other aircraft, as opposed to a bomber, which is designed primarily to attack ground targets...
s grew in size and power to be able to carry the same sorts of loads at even greater speed
Airspeed
Airspeed is the speed of an aircraft relative to the air. Among the common conventions for qualifying airspeed are: indicated airspeed , calibrated airspeed , true airspeed , equivalent airspeed and density airspeed....
s, light bombers were replaced around the 1950s and the term fell from general use.

Light bombers of World War II
World War II
World War II, or the Second World War , was a global conflict lasting from 1939 to 1945, involving most of the world's nations—including all of the great powers—eventually forming two opposing military alliances: the Allies and the Axis...
were single-engine or, less commonly, twin-engine aircraft with a bomb load of about 500-1,000 kg. Designs included the Fairey Battle
Fairey Battle
The Fairey Battle was a British single-engine light bomber built by the Fairey Aviation Company in the late 1930s for the Royal Air Force. The Battle was powered by the same Rolls-Royce Merlin piston engine that gave contemporary British fighters high performance; however, the Battle was weighed...
, Mitsubishi Ki-51
Mitsubishi Ki-51
|-See also:-References:NotesBibliography* Francillon, Ph.D., René J. Japanese Aircraft of the Pacific War. London: Putnam & Company Ltd., 1970. ISBN 0-370-00033-1 .-External links:* * *...
(known to the Allies
Allies of World War II
The Allies of World War II were the countries that opposed the Axis powers during the Second World War . Former Axis states contributing to the Allied victory are not considered Allied states...
as "Sonia"), Lockheed Hudson
Lockheed Hudson
The Lockheed Hudson was an American-built light bomber and coastal reconnaissance aircraft built initially for the Royal Air Force shortly before the outbreak of the Second World War and primarily operated by the RAF thereafter...
, and Martin Baltimore
Martin Baltimore
The Martin 187 Baltimore was a two-engined light attack bomber built by the Glenn L. Martin Company in the United States, originally ordered by the French in May 1940 as a follow-up to the earlier Martin Maryland, then in service in France. With the fall of France, the production series was...
. They could also be used in the reconnaissance role.

Some of them were dive bomber
Dive bomber
A dive bomber is a bomber aircraft that dives directly at its targets in order to provide greater accuracy for the bomb it drops. Diving towards the target reduces the distance the bomb has to fall, which is the primary factor in determining the accuracy of the drop...
s, such as the Vultee A-31 Vengeance
Vultee A-31 Vengeance
The Vultee A-31 Vengeance was an American dive bomber of World War II, built by Vultee Aircraft. The Vengeance was not used in combat by US units, however it served with the British Royal Air Force, the Royal Australian Air Force, and Indian Air Force in Southeast Asia and the Southwest Pacific.The...
and multi-role Petlyakov Pe-2
Petlyakov Pe-2
The Petlyakov Pe-2 was a Soviet dive bomber aircraft used during World War II. It was regarded as one of the best ground attack aircraft of the war and it was extremely successful in the roles of heavy fighter, reconnaissance and night fighter...
, or ground-attack aircraft like the Breda Ba.65
Breda Ba.65
|-See also:-References:NotesBibliography* Angelucci, Enzo and Paolo Matricardi. World Aircraft: World War II, Volume I . Maidenhead, UK: Sampson Low, 1978. ISBN 0-562-00096-8....
and Ilyushin Il-2
Ilyushin Il-2
The Ilyushin Il-2 was a ground-attack aircraft in the Second World War, produced by the Soviet Union in very large numbers...
Shturmovik. Light bombers, naturally suited for shorter landings, were also frequently designed for aircraft carrier
Aircraft carrier
An aircraft carrier is a warship designed with a primary mission of deploying and recovering aircraft, acting as a seagoing airbase. Aircraft carriers thus allow a naval force to project air power worldwide without having to depend on local bases for staging aircraft operations...
operations. A few twin-engine light bomber designs were also successful when converted into heavy fighter
Heavy fighter
A heavy fighter is a fighter aircraft designed to carry heavier weapons or operate at longer ranges. To achieve acceptable performance, most heavy fighters were twin-engined, and many had multi-place crews....
s or night fighter
Night fighter
A night fighter is a fighter aircraft adapted for use at night or in other times of bad visibility...
s; examples of these would be the Bristol Blenheim
Bristol Blenheim
The Bristol Blenheim was a British light bomber aircraft designed and built by the Bristol Aeroplane Company that was used extensively in the early days of the Second World War. It was adapted as an interim long-range and night fighter, pending the availability of the Beaufighter...
and Douglas A-20 Havoc.

The light bomber was tasked with missions similar to those of modern attack aircraft and strike fighter
Strike fighter
In a current military parlance, a strike fighter is a multi-role combat aircraft designed to operate primarily in the air-to-surface attack role while also incorporating certain performance characteristics of a fighter aircraft. As a category, it is distinct from fighter-bombers...
s.