Leonid Haydamaka has left his impression on the development of bandura
Bandura
Bandura refers to a Ukrainian plucked string folk instrument. It combines elements of a box zither and lute, as well as its lute-like predecessor, the kobza...
art in the 20th century.

Born 27 April 1898, in Kharkiv
Kharkiv
Kharkiv or Kharkov is the second-largest city in Ukraine.The city was founded in 1654 and was a major centre of Ukrainian culture in the Russian Empire. Kharkiv became the first city in Ukraine where the Ukrainian Soviet Socialist Republic was proclaimed in December 1917 and Soviet government was...
the son of a Medical practitioner he studied at the Kharkiv Realschule Gymnasium, and later received an engineering degree at the Kharkiv Institute of Technology.

From early childhood he became interested in music, and at the age of 10 began to play the violin
Violin
The violin is a string instrument, usually with four strings tuned in perfect fifths. It is the smallest, highest-pitched member of the violin family of string instruments, which includes the viola and cello....
. During his high school days he played in the school orchestra on the violin and later became the director of the orchestra.

In 1918 Haydamaka entered the Kharkiv Higher Music school (conservatory) where he studied cello and bass for 5 years.


Interest in the bandura

In 1923 Haydamaka was introduced to Hnat Khotkevych
Hnat Khotkevych
Hnat Martynovych Khotkevych December 31, 1877 in Kharkiv, Russian Empire – October 8, 1938 in Kharkiv, in the Ukrainian SSR of the Soviet Union) was a Ukrainian writer, ethnographer, playwright, composer, musicologist, and bandurist....
. Khotkevych showed him the manuscript of a bandura textbook which he had prepared for publication and allowed him to copy out technical exercises and pieces, which helped him further develop his technique.

Khotkevych had a small bandura with only two octaves of treble strings. Haydamaka was involved in the development of the concert version of the Kharkiv bandura. He consulted with Khotkevych and on the basis of these consultations he made blueprints for the construction of a diatonic bandura with 8 basses and 23 treble strings which later became the standard for the Kharkiv and Poltava Bandurist Capella
Poltava Bandurist Capella
The Poltava Bandurist Capella was vocal-instrumental ensemble who accompanied themselves on the multi-stringed Ukrainian bandura. It was initially established in February 1925, based on a male church choir who sang in the Ukrainian Autocephalous Orthodox Cathedral in Poltava under the direction of...
which used the Kharkiv technique.

In the 20's, especially in the second half of the decade a mass interest in the bandura meant the rapid growth of amateur ensembles and bandura choruses, however there was little material such as textbooks or musical arrangements. There was also a lack of qualified professionally trained bandurists. This need was recognized and the People's Komissariat of Education which was headed at that time by Mykola Skrypnyk
Mykola Skrypnyk
Mykola Oleksiyovych Skrypnyk was a Ukrainian Bolshevik leader who was a proponent of the Ukrainian Republic's independence, and led the cultural Ukrainization effort in Soviet Ukraine. When the policy was reversed and he was removed from his position, he committed suicide rather than be forced to...
resolved to form a bandura course at the Kharkiv Music-drama institute for the educating of professional cadres. Hnat Khotkevych was invited to head the position of professor for the bandura courses.

Haydamaka signed up for these courses which he completed in 1930. 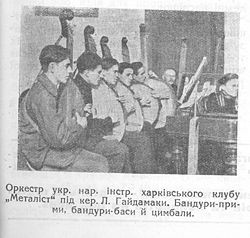 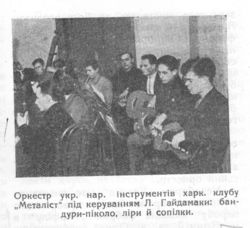 In 1921 Leonid Haydamaka had already formed a bandurist ensemble at the Metalist club, but because of the lack of good quality banduras and the fact that the bandura movement had not yet become mainstream, this attempt was not very successful.

In 1923 the Metalist club obtained money form the government and invited Haydamaka back to try to revive the ensemble. This time Haydamaka was able to negotiate not only the establishment of a bandura ensemble but a whole orchestra of Ukrainian folk instruments.

The money promised was slow in coming and it was only in 1925 after 3 hard years that the orchestra was able to receive a full complement of instruments. In 1925 it consisted of:

14 banduras (3 piccolo, 8 primas and 3 basses)
2 tsymbaly
Tsymbaly
The tsymbaly is the Ukrainian version of the hammer dulcimer. It is a chordophone made up of a trapezoidal box with metal strings strung across it. The tsymbaly is played by striking two beaters against the strings....
(hammer dulcimers) Prima and bass
4 liry
Liry
Liry is a commune in the Ardennes department in northern France.-Population:...
(hurdy-gurdies) - 2 soprano and 2 tenor
2 sopilka
Sopilka
Sopilka is a name applied to a variety of woodwind instruments of the flute family used by Ukrainian folk instrumentalists. Sopilka most commonly refers to a fife made of a variety of materials and has six to ten finger holes...
(duct flutes)
1 sviril (Pan pipe)
2 trembity (alpine horns)
and percussion - drums, timpani and triangle.

The work required to establish any type of orchestra is complicated and difficult, but the process of developing an orchestra of rare and almost forgotten instruments was at times bordering on the impossible. The instruments could not be obtained, and some could only be viewed in museums. Instruments had to be designed and made and made in a way that they stayed true to the traditional instrument. After instruments were procured, one had to teach players to play on these instruments, and this was an additional problem because written music for these instruments did not exist, and here Haydamaka had to arrange and compose music for the instruments. The scores had to be written and parts copied out and to form this mass into one orchestral whole.

Haydamaka did all this himself and did it the best way he could. Within 7 years the orchestra had given over 500 concerts.

The repertoire of the orchestra included folk songs and classical transcriptions.

In 1929 a number of articles appeared in the "Muzyka Masam" magazine regarding the formation of similar Orchestras of Ukrainian Folk Instruments. A number of orchestrations were also published in the magazine. In 1930 a book of 3 orchestrations was published (1100 copies) containing a number of arrangements for the orchestra. In that year also L. Haydamaka was able to also publish some arrangements for the Kharkiv style bandura.

In 1931 a number of records were recorded and produced in Moscow
Moscow
Moscow is the capital, the most populous city, and the most populous federal subject of Russia. The city is a major political, economic, cultural, scientific, religious, financial, educational, and transportation centre of Russia and the continent...
with recordings of the ensemble.

WWII had left its imprint on the Haydamaka family and with the return of Soviet forces they had to leave Ukraine where he wandered through Western Europe. Haydamaka made a living performing, giving concerts and writing out music and orchestrations. In Germany, for a period of time he was a member of the Ostap Veresai Brotherhood directed by Hryhory Bazhul.

After the war he moved to the USA in 1950, where he found employment as a draftsman in a company designing hydro-electric dams in Flushing, Queens
Flushing, Queens
Flushing, founded in 1645, is a neighborhood in the north central part of the City of New York borough of Queens, east of Manhattan.Flushing was one of the first Dutch settlements on Long Island. Today, it is one of the largest and most diverse neighborhoods in New York City...
, New York
New York
New York is a state in the Northeastern region of the United States. It is the nation's third most populous state. New York is bordered by New Jersey and Pennsylvania to the south, and by Connecticut, Massachusetts and Vermont to the east...
where he worked until the age of 74.

He continued to occasionally perform and teach music and the bandura in New York, publishing articles on the history of the bandura in various semi-scholarly journals such as Guitar Review - a journal of the Society of Classical Guitar in 1971. He ocassionally attended meetings of the NY Society of Classical Guitar, which was led by his pre-revolutionary friend from Kharkiv - Vladimir Bobri.

After his retirement he moved to New Hampshire to live with his daughter.

Haydamaka died in New Hampshire in 1991.