Encyclopedia
The Poltava Bandurist Capella was vocal-instrumental ensemble who accompanied themselves on the multi-stringed Ukrainian bandura
Bandura
Bandura refers to a Ukrainian plucked string folk instrument. It combines elements of a box zither and lute, as well as its lute-like predecessor, the kobza...
. It was initially established in February 1925, based on a male church choir who sang in the Ukrainian Autocephalous Orthodox Cathedral in Poltava
Poltava
Poltava is a city in located on the Vorskla River in central Ukraine. It is the administrative center of the Poltava Oblast , as well as the surrounding Poltava Raion of the oblast. Poltava's estimated population is 298,652 ....
under the direction of Fedir (Khvedir) Popadych. The ensemble was disbanned in October 1934.

Initially the members of the group played on borrowed instruments. One of the major problems of these instruments was trying to keep them in tune as many had wooden tuning pegs which were not reliable. They performed part of their concerts without bandura accompaniment, sometimes accompanied by the piano. The only member of the Capella who had prior experience with the bandura was Danylo Pika who had taken some bandura lessons from Opanas Slastion
Opanas Slastion
Opanas Georgievych Slastion was a Ukrainian graphic artist, painter and ethnographer.He was born in the Ukrainian port town of Berdyansk on the Berdyansk Gulf of the Sea of Azov...
. 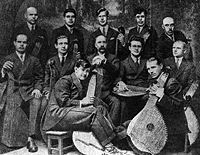 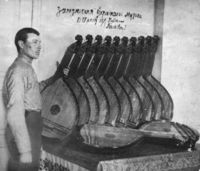 After a successful performance in Odessa the eleven members of the Capella ordered new banduras and in 1927 received new semi-chromatic Kiev type instruments made by Poltava bandura maker M. Domnenko.

In 1928, despite the amateur status of the Capella and the fact that they could only perform in their free time from work, the Capella had some 85 works in their repertoire which they accompanied by bandura and piano. The ensemble gave 249 concerts before 122,825 listeners performing in Poltava and regions, the Donbas, Odessa
Odessa
Odessa or Odesa is the administrative center of the Odessa Oblast located in southern Ukraine. The city is a major seaport located on the northwest shore of the Black Sea and the fourth largest city in Ukraine with a population of 1,029,000 .The predecessor of Odessa, a small Tatar settlement,...
, Kharkiv
Kharkiv
Kharkiv or Kharkov is the second-largest city in Ukraine.The city was founded in 1654 and was a major centre of Ukrainian culture in the Russian Empire. Kharkiv became the first city in Ukraine where the Ukrainian Soviet Socialist Republic was proclaimed in December 1917 and Soviet government was...
, Kremenchuk
Kremenchuk
Kremenchuk is an important industrial city in the Poltava Oblast of central Ukraine. Serving as the administrative center of the Kremenchutskyi Raion , the city itself is also designated as a separate raion within the oblast, and is located on the banks of Dnieper River.-History:Kremenchuk was...
, Romny
Romny
Romny is a city in the northern Ukrainian Oblast of Sumy. It is located on the Romen River and is the administrative center of the Romny Raion...
, Kherson
Kherson
Kherson is a city in southern Ukraine. It is the administrative center of the Kherson Oblast , and is designated as its own separate raion within the oblast. Kherson is an important port on the Black Sea and Dnieper River, and the home of a major ship-building industry...
and Mykolayiv.

On 1 October 1928, the Capella was chosen by the People's Commissariat for Education to work with bandura specialist Hnat Khotkevych
Hnat Khotkevych
Hnat Martynovych Khotkevych December 31, 1877 in Kharkiv, Russian Empire – October 8, 1938 in Kharkiv, in the Ukrainian SSR of the Soviet Union) was a Ukrainian writer, ethnographer, playwright, composer, musicologist, and bandurist....
to form a special experimental studio for the development of bandura technique and repertoire. The members switched over to diatonic Kharkiv
Kharkiv
Kharkiv or Kharkov is the second-largest city in Ukraine.The city was founded in 1654 and was a major centre of Ukrainian culture in the Russian Empire. Kharkiv became the first city in Ukraine where the Ukrainian Soviet Socialist Republic was proclaimed in December 1917 and Soviet government was...
instruments made by Poltava bandura maker - Hryhory Paliyevetz. The Capella had its name changed to the "Exemplary Bandura Studio of UKRFIL".

The eleven members of the Studio were joined by a twelfth - Ivan Boretz
Ivan Boretz
Ivan Oleksiyevych Boretz was a bandurist. Member of the Kiev, Kharkiv and later Poltava Bandurist Capellas. Director of the Horiv Bandura Ensemble. Arrested on 21 September 1937, shot on 11 November 1937. His family was informed that he had died on 12 February 1941. He was rehabilitated on 9...
in 1928, who came to study at the studio from the Kharkiv Bandurist Capella.

The studio functioned for 18 months. Each week Volodymyr Kabachok
Volodymyr Kabachok
Volodymyr Andryievych Kabachok was a bandura player in the Ukraine.-Biography:Born in the village of Petrivka, in the Poltava region, Kabachok became a singer in the Archbishop's choir in Poltava until 1907 when he entered the Poltava music college.Kabachok continued his music education at the...
would travel to Kharkiv from Poltava to pick up the weeks assignments from Khotkevych. Khotkevych would visit once a month to review the progress of the students. The technique of the members of the Capella grew considerably and the new repertoire composed and arranged by Hnat Khotkevych opened up new aspects of the bandura previously never explored. Over 20 new pieces were prepared. These included such works as the "Poem about Bayda", and the "Duma: Storm on the Black Sea".

At the completion of the studio period with Hnat Khotkevych
Hnat Khotkevych
Hnat Martynovych Khotkevych December 31, 1877 in Kharkiv, Russian Empire – October 8, 1938 in Kharkiv, in the Ukrainian SSR of the Soviet Union) was a Ukrainian writer, ethnographer, playwright, composer, musicologist, and bandurist....
the group had a concert examination in Kharkiv at the Korolenko Library Auditorium on 22 January 1930, attended by musical dignitaries of Ukraine. After a successful performance the members began to work professionally as artists in a full-time capacity. After the performance the Capella was renamed "The State Exemplary Bandura Capella of the Ukrainian SSR
Ukrainian SSR
The Ukrainian Soviet Socialist Republic or in short, the Ukrainian SSR was a sovereign Soviet Socialist state and one of the fifteen constituent republics of the Soviet Union lasting from its inception in 1922 to the breakup in 1991...
".

In 1930 concerts were planned with the Capella being accompanied by a symphonic orchestra. Khotkevych made preparations composing a number of works for the Capella with full symphonic accompaniment. The performance however did not take place. This period coincides with a growing period of anti-Ukrainian actions by the Soviet government.

In 1931, after a successful performances in Moscow, the ensemble was chosen to be the first artistic group from the Soviet Union to tour North America. In order to prepare for a tour of the United States the received new instruments with tuning mechanism and dampening mechanisms made by Hryhorij Paliyevetz. Despite a deposit of $15,000 being paid, the announced tour did not take place.

Instead, the group was exploited mercilessly by UkrFil giving some 28 concerts a month. Most of the concerts took place in areas which had little interest in the bandura and bandura music. Severe restrictions were also place on the repertoire.

For a brief time however, the ensemble was extremely popular and demonstrated the direction for further development of the bandura for many years to come.

In 1932 Hnat Khotkevych
Hnat Khotkevych
Hnat Martynovych Khotkevych December 31, 1877 in Kharkiv, Russian Empire – October 8, 1938 in Kharkiv, in the Ukrainian SSR of the Soviet Union) was a Ukrainian writer, ethnographer, playwright, composer, musicologist, and bandurist....
fell out of favour with the authorities. His compositions and arrangements were removed from the list of allowed works for performance in Ukraine. The members of the Capella also came under considerable pressure, being repeatedly taken for questioning by the NKVD
NKVD
The People's Commissariat for Internal Affairs was the public and secret police organization of the Soviet Union that directly executed the rule of power of the Soviets, including political repression, during the era of Joseph Stalin....
(the Soviet secret police).

In January 1934 the artistic director, Volodymyr Kabachok
Volodymyr Kabachok
Volodymyr Andryievych Kabachok was a bandura player in the Ukraine.-Biography:Born in the village of Petrivka, in the Poltava region, Kabachok became a singer in the Archbishop's choir in Poltava until 1907 when he entered the Poltava music college.Kabachok continued his music education at the...
, was arrested after a concert by the Capella in Kiev and did not return back to the group. With his arrest most of the scores used by the Capella which included many original handwritten manuscripts composed and arranged by Hnat Khotkevych specifically for the group were confiscated.
With Kabachok's arrest the directorship of the Capella fell to Danylo Pika, who was not as strong an administrator. After many months of not being paid (from January-October) the Capella was forced to disband in October 1934.

In 1935 some of the members moved to Kiev
Kiev
Kiev or Kyiv is the capital and the largest city of Ukraine, located in the north central part of the country on the Dnieper River. The population as of the 2001 census was 2,611,300. However, higher numbers have been cited in the press....
and worked under the protection of the Dumka Chorus and its conductor - Nestor Horodyvenko. In March 1935 some of the members of the Poltava Bandurist Capella participated in the formation of a new larger Kiev Bandurist Capella
Kiev Bandurist Capella
The Kiev Bandurist Capella is a male vocal-instrumental ensemble that accompanies its singing with the playing of the multi-stringed Ukrainian folk instrument known as the bandura....
under the direction of Mykola Mykhailov
Mykola Mykhailov
Mykola Mykolayovych Mykhailov was a Ukrainian bandurist, composer, and arranger.- Biography :Born in 1903, Mykola Mykolailovych Mykhailov completed his studies at the Kiev Muz-dram Institute in 1929....
.

Under the direction of Volodymyr Kabachok the Poltava Bandurist Capella recorded a number of records. In 1933 the following songs were released in editions of 2500 copies:

Despite its short history, the legacy of the Poltava Bandurist Capella is significant. It pioneered the Kharkiv style of playing the bandura within a bandurist capella which allowed the use of unique technical devices not possible on other instruments. The repertoire was symphonic in its concept and implementation. Refinements in instrument construction developed by member's of the Capella can be seen in instruments being constructed today.
The source of this article is wikipedia, the free encyclopedia.  The text of this article is licensed under the GFDL.