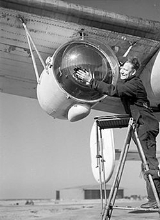 Encyclopedia
The Leigh Light was a British
United Kingdom
The United Kingdom of Great Britain and Northern IrelandIn the United Kingdom and Dependencies, other languages have been officially recognised as legitimate autochthonous languages under the European Charter for Regional or Minority Languages...
World War II
World War II
World War II, or the Second World War , was a global conflict lasting from 1939 to 1945, involving most of the world's nations—including all of the great powers—eventually forming two opposing military alliances: the Allies and the Axis...
era anti-submarine device
Anti-submarine warfare
Anti-submarine warfare is a branch of naval warfare that uses surface warships, aircraft, or other submarines to find, track and deter, damage or destroy enemy submarines....
used in the Second Battle of the Atlantic
Second Battle of the Atlantic
The Battle of the Atlantic was the longest continuous military campaign in World War II, running from 1939 to the defeat of Germany in 1945. At its core was the Allied naval blockade of Germany, announced the day after the declaration of war, and Germany's subsequent counter-blockade. It was at its...
.

It was a powerful (22 million candela
Candela
The candela is the SI base unit of luminous intensity; that is, power emitted by a light source in a particular direction, weighted by the luminosity function . A common candle emits light with a luminous intensity of roughly one candela...
) carbon arc searchlight
Searchlight
A searchlight is an apparatus that combines a bright light source with some form of curved reflector or other optics to project a powerful beam of light of approximately parallel rays in a particular direction, usually constructed so that it can be swiveled about.-Military use:The Royal Navy used...
of 24 inches (610 mm) diameter fitted to a number of the British Royal Air Force
Royal Air Force
The Royal Air Force is the aerial warfare service branch of the British Armed Forces. Formed on 1 April 1918, it is the oldest independent air force in the world...
's Coastal Command
RAF Coastal Command
RAF Coastal Command was a formation within the Royal Air Force . Founded in 1936, it was the RAF's premier maritime arm, after the Royal Navy's secondment of the Fleet Air Arm in 1937. Naval aviation was neglected in the inter-war period, 1919–1939, and as a consequence the service did not receive...
patrol bomber
Patrol bomber
A maritime patrol aircraft , also known as a patrol aircraft, maritime reconnaissance aircraft, or by the older American term patrol bomber, is a fixed-wing aircraft designed to operate for long durations over water in maritime patrol roles - in particular anti-submarine, anti-ship and search and...
s to help them spot surfaced German
Germany
Germany , officially the Federal Republic of Germany , is a federal parliamentary republic in Europe. The country consists of 16 states while the capital and largest city is Berlin. Germany covers an area of 357,021 km2 and has a largely temperate seasonal climate...
U-boat
U-boat
U-boat is the anglicized version of the German word U-Boot , itself an abbreviation of Unterseeboot , and refers to military submarines operated by Germany, particularly in World War I and World War II...
s at night. 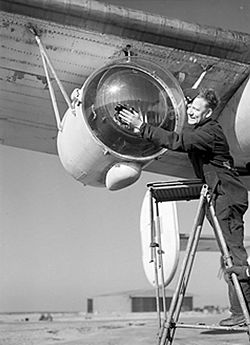 It was successfully used from June 1942 onwards to attack U-boats recharging their batteries
Battery (electricity)
An electrical battery is one or more electrochemical cells that convert stored chemical energy into electrical energy. Since the invention of the first battery in 1800 by Alessandro Volta and especially since the technically improved Daniell cell in 1836, batteries have become a common power...
on the surface at night. Up to then they had been relatively safe from attack at night. The aircraft would approach the submarine using its ASV (Air to Surface Vessel) radar
Radar
Radar is an object-detection system which uses radio waves to determine the range, altitude, direction, or speed of objects. It can be used to detect aircraft, ships, spacecraft, guided missiles, motor vehicles, weather formations, and terrain. The radar dish or antenna transmits pulses of radio...
and only switch on the searchlight beam during the final approach. The U-boat had insufficient time to dive and the bombardier had a clear view of the target. It was so successful that for a time German submarines were forced to switch to daytime battery charging when they could at least see aircraft approaching.

Early air-to-surface radar
Radar
Radar is an object-detection system which uses radio waves to determine the range, altitude, direction, or speed of objects. It can be used to detect aircraft, ships, spacecraft, guided missiles, motor vehicles, weather formations, and terrain. The radar dish or antenna transmits pulses of radio...
sets, namely the ASV Mk. II
History of radar
The history of radar starts with experiments by Heinrich Hertz in the late 19th century that showed that radio waves were reflected by metallic objects. This possibility was suggested in James Clerk Maxwell's seminal work on electromagnetism...
, had a fairly long minimum detection range. Thus as the aircraft approached the target, it would disappear off the radar at a range that was too great to allow it to be seen by eye at night without some form of illumination. At first aircraft solved this problem by dropping flares to light up the area, but since the flare only lit up the area directly under the aircraft, a string would have to be dropped until the submarine was spotted. Once it was spotted the aircraft would have to circle back to attack, the entire process giving the submarine a fair amount of time to dive out of danger.

Eventually time delayed flares were developed that allowed the attacking plane time to circle. The flare was fired into the air from a buoy previously dropped by the plane. The surfaced submarine could then be seen in silhouette as the plane approached.

Wing Commander
Wing Commander (rank)
Wing commander is a commissioned rank in the Royal Air Force and the air forces of many other Commonwealth countries...
Humphrey de Verd Leigh
Humphrey de Verd Leigh
Wing Commander Humphrey de Verd Leigh OBE, DFC, AFC was a Royal Air Force officer. During the Second World War his idea for an anti-submarine spotlight for Coastal Command was developed and named the Leigh Light after him....
, an RAF personnel officer, came up with his own solution after chatting with returning air crew. This was to mount a searchlight under the aircraft, pointed forward and allowing the submarine to be spotted as soon as it was turned on. He then developed the Leigh Light entirely off his own bat, in secret and without official sanction - even the Air Ministry were unaware of its development until shown the completed prototype. At first it was difficult to fit on aircraft due to its size. Leigh persisted in his efforts to test the idea, and garnered the support of the Commander-in-Chief of Coastal Command, Sir Frederick Bowhill
Frederick Bowhill
Air Chief Marshal Sir Frederick William Bowhill, GBE, KCB, CMG, DSO & Bar was a senior commander in the Royal Air Force before and during World War II.-RAF career:...
. In March 1941 a Vickers Wellington DWI
Vickers Wellington
The Vickers Wellington was a British twin-engine, long range medium bomber designed in the mid-1930s at Brooklands in Weybridge, Surrey, by Vickers-Armstrongs' Chief Designer, R. K. Pierson. It was widely used as a night bomber in the early years of the Second World War, before being displaced as a...
that conveniently already had the necessary generator on board, (it had been used for anti-magnetic mining operations using a large electromagnet) was modified with a retractable "dustbin" holding the lamp, and proved the concept sound.

At this point the Air Ministry
Air Ministry
The Air Ministry was a department of the British Government with the responsibility of managing the affairs of the Royal Air Force, that existed from 1918 to 1964...
decided that the idea was worthwhile, but that they should instead use the Turbinlite
Turbinlite
The Helmore/GEC Turbinlite was a 2,700 million candela searchlight fitted in the nose of a number of British Douglas Havoc night fighters during the early part of the Second World War and around the time of The Blitz....
, a less effective system which had been originally developed as an aid for nighttime bomber
Bomber
A bomber is a military aircraft designed to attack ground and sea targets, by dropping bombs on them, or – in recent years – by launching cruise missiles at them.-Classifications of bombers:...
interception. After trials they too eventually decided to use Leigh's system, but it was not until mid-1942 that aircraft started being modified to carry it. Development assistance and production was by Savage and Parsons Ltd. of Watford led by Jack Savage. 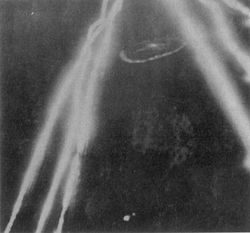 The Turret type, fitted on Wellington aircraft was a 24 inch searchlight mounted in a retractable under-turret controlled by hydraulic motor and ram. The maximum beam intensity was 50 million candles without the spreading lens and about 20 million candles with the lens. Total weight was 1,100 lbs.

The Nacelle type, fitted on Catalina’s and Liberators was a 20 inch searchlight mounted in a nacelle 32 inches in diameter slung from the bomb lugs on the wing. The controls were electric and the maximum beam intensity was 90 million candles, without the spreading lens and about 17 million with the lens. Total weight was 870 lbs.

By June 1942, aircraft equipped with ASV radar and the Leigh Light were operating over the Bay of Biscay
Bay of Biscay
The Bay of Biscay is a gulf of the northeast Atlantic Ocean located south of the Celtic Sea. It lies along the western coast of France from Brest south to the Spanish border, and the northern coast of Spain west to Cape Ortegal, and is named in English after the province of Biscay, in the Spanish...
intercepting U-boats moving to and from their home ports on the coast of France. The first confirmed kill was the U-502, sunk on 5 July 1942 by a Vickers Wellington of 172 Squadron
No. 172 Squadron RAF
No. 172 Squadron RAF was a Second World War Royal Air Force anti-submarine squadron that operated the Vickers Wellington equipped with the Leigh Light.-History:...
, piloted by American, Wiley B. Howell. In the five months prior not one submarine had been sunk, and six aircraft had been lost. The Leigh Light turned the tables, and by August the U-boats preferred to take their chances in daytime when they at least had some warning and could fight back.

Fairey Swordfish
Fairey Swordfish
The Fairey Swordfish was a torpedo bomber built by the Fairey Aviation Company and used by the Fleet Air Arm of the Royal Navy during the Second World War...
biplane torpedo bombers were trialled with a Leigh Light under the lower port wing. A large battery pack for it was slung under the fuselage where the torpedo would normally be carried. The armament was a rack of anti-submarine bombs carried under the other wing. With such a heavy load performance was poor with a top speed marginally above the stall speed.
Wing Commander
Wing Commander (rank)
Wing commander is a commissioned rank in the Royal Air Force and the air forces of many other Commonwealth countries...
Peter Cundy
Peter Cundy
Wing Commander Peter John Cundy DSO AFC RAF was a British pilot credited as one of the top U-boat killers of the Second World War....
was also given the Air Force Cross
Air Force Cross (United Kingdom)
The Air Force Cross is a military decoration awarded to personnel of the United Kingdom Armed Forces, and formerly also to officers of the other Commonwealth countries, for "an act or acts of valour, courage or devotion to duty whilst flying, though not in active operations against the enemy"...
for his part in the development of the Leigh Light.