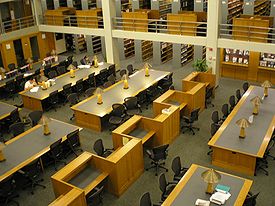 A law library is a library
Library
In a traditional sense, a library is a large collection of books, and can refer to the place in which the collection is housed. Today, the term can refer to any collection, including digital sources, resources, and services...
designed to assist law students, attorneys
Lawyer
A lawyer, according to Black's Law Dictionary, is "a person learned in the law; as an attorney, counsel or solicitor; a person who is practicing law." Law is the system of rules of conduct established by the sovereign government of a society to correct wrongs, maintain the stability of political...
, judge
Judge
A judge is a person who presides over court proceedings, either alone or as part of a panel of judges. The powers, functions, method of appointment, discipline, and training of judges vary widely across different jurisdictions. The judge is supposed to conduct the trial impartially and in an open...
s, and their law clerk
Law clerk
A law clerk or a judicial clerk is a person who provides assistance to a judge in researching issues before the court and in writing opinions. Law clerks are not court clerks or courtroom deputies, who are administrative staff for the court. Most law clerks are recent law school graduates who...
s and anyone else who finds it necessary to correctly determine the state of the law
Law
Law is a system of rules and guidelines which are enforced through social institutions to govern behavior, wherever possible. It shapes politics, economics and society in numerous ways and serves as a social mediator of relations between people. Contract law regulates everything from buying a bus...
.

Every accredited American law school
Law school
A law school is an institution specializing in legal education.- Law degrees :- Canada :...
is required by the American Bar Association
American Bar Association
The American Bar Association , founded August 21, 1878, is a voluntary bar association of lawyers and law students, which is not specific to any jurisdiction in the United States. The ABA's most important stated activities are the setting of academic standards for law schools, and the formulation...
to have a law library meeting certain minimum specifications with respect to quantity and quality of materials available. Some law school libraries are kept in the same building as the general library, but many are either in the law school's building, or in a separate facility altogether. Most courthouse
Courthouse
A courthouse is a building that is home to a local court of law and often the regional county government as well, although this is not the case in some larger cities. The term is common in North America. In most other English speaking countries, buildings which house courts of law are simply...
s also have a law library; the United States Supreme Court building
United States Supreme Court building
The Supreme Court Building is the seat of the Supreme Court of the United States. It is situated in Washington, D.C. at 1 First Street, NE, on the block immediately east of the United States Capitol. The building is under the jurisdiction of the Architect of the Capitol. On May 4, 1987, the Supreme...
houses one of the most extensive in the world, rivaled by the Law Library of Congress
Law Library of Congress
The Law Library of the United States Congress was established in 1832.-Mission statement:From the Law Library of Congress website:"The mission of the Law Library of Congress is to provide research and legal information to the U.S. Congress as well as to U.S. Federal Courts and Executive Agencies,...
. Some larger law firm
Law firm
A law firm is a business entity formed by one or more lawyers to engage in the practice of law. The primary service rendered by a law firm is to advise clients about their legal rights and responsibilities, and to represent clients in civil or criminal cases, business transactions, and other...
s maintain a private library for their own attorneys, but many firms in college town
College town
A college town or university town is a community which is dominated by its university population...
s and larger cities with universities
University
A university is an institution of higher education and research, which grants academic degrees in a variety of subjects. A university is an organisation that provides both undergraduate education and postgraduate education...
simply dispatch their attorneys to local law schools to do legal research. In some U.S. state
U.S. state
A U.S. state is any one of the 50 federated states of the United States of America that share sovereignty with the federal government. Because of this shared sovereignty, an American is a citizen both of the federal entity and of his or her state of domicile. Four states use the official title of...
s, like California
California
California is a state located on the West Coast of the United States. It is by far the most populous U.S. state, and the third-largest by land area...
, all counties are required by state law to maintain a public law library for the benefit of the general public.

A typical law library will include in its collection a large number of works not seen in other libraries, including a full set of United States Reports, one or both of the unofficial U.S. Supreme Court reporters, the West National Reporter System, the West American Digest System
West American Digest System
The West American Digest System is a system of identifying points of law from reported cases and organizing them by topic and key number. The system was developed by West Publishing to organize the entire body of American law...
, official reporters from various states, the Federal Register
Federal Register
The Federal Register , abbreviated FR, or sometimes Fed. Reg.) is the official journal of the federal government of the United States that contains most routine publications and public notices of government agencies...
, volumes of American Jurisprudence
American Jurisprudence
American Jurisprudence is an encyclopedia of United States law, published by West. It was originated by Lawyers Cooperative Publishing, which was subsequently acquired by the Thomson Corporation. The series is now in its second edition, launched in 1962...
, bound volumes containing issues of prominent law review
Law review
A law review is a scholarly journal focusing on legal issues, normally published by an organization of students at a law school or through a bar association...
s from around the country, federal and state statute
Statute
A statute is a formal written enactment of a legislative authority that governs a state, city, or county. Typically, statutes command or prohibit something, or declare policy. The word is often used to distinguish law made by legislative bodies from case law, decided by courts, and regulations...
s and regulation
Regulation
Regulation is administrative legislation that constitutes or constrains rights and allocates responsibilities. It can be distinguished from primary legislation on the one hand and judge-made law on the other...
s (such as the United States Code
United States Code
The Code of Laws of the United States of America is a compilation and codification of the general and permanent federal laws of the United States...
and Code of Federal Regulations
Code of Federal Regulations
The Code of Federal Regulations is the codification of the general and permanent rules and regulations published in the Federal Register by the executive departments and agencies of the Federal Government of the United States.The CFR is published by the Office of the Federal Register, an agency...
), and a variety of treatises
Legal treatise
A legal treatise is a scholarly legal publication containing all the law relating to a particular area, such as criminal law or trusts and estates...
, encyclopedias, looseleaf service
Looseleaf service
A looseleaf service is a type of publication used in legal research which brings together both primary and secondary source materials on a specific field or topic in law...
s, and practice guides.

Large libraries may contain many additional materials covering topics like legal education, research, and writing; the history of the American legal system and profession; the history behind certain high-profile cases; techniques of oral argument; and the legislative history of important federal and state statutes. In contrast, a small law library, at a minimum, may contain only one unofficial Supreme Court reporter, selected West national reporters and digests specific to the state in which the library is located, the United States Code, a few state-specific reporters and statutory compilations (if they exist for a particular state), and several state-specific treatises and practice guides.

In recent years, the advent of online legal researchcan outlets such as FindLaw
FindLaw
FindLaw is a business of Thomson Reuters that provides online legal information and online marketing services for law firms. FindLaw was created by Stacy Stern, Martin Roscheisen and Tim Stanley in 1995, and was acquired by Thomson West in 2001....
, Westlaw
Westlaw
Westlaw is one of the primary online legal research services for lawyers and legal professionals in the United States and is a part of West. In addition, it provides proprietary database services...
, LexisNexis
LexisNexis
LexisNexis Group is a company providing computer-assisted legal research services. In 2006 it had the world's largest electronic database for legal and public-records related information...
, and HeinOnline
HeinOnline
HeinOnline, sometimes spelled Hein Online, is an internet service launched in 2000 that is a source of legal information, much like Westlaw and LexisNexis. Like those services, use of HeinOnline requires a subscription, although most law schools provide access to students for free. It is published...
(or in Canada, CanLII
CanLII
The Canadian Legal Information Institute is a non-profit organization created and funded by the Federation of Law Societies of Canada, on behalf of its 14 member law societies...
) has reduced the need for some types of printed volumes like reporters and statutory compilations. A number of law libraries have therefore reduced the availability of printed works that can easily be found on the Internet, and have increased their own Internet availability. On the other hand, some university
University
A university is an institution of higher education and research, which grants academic degrees in a variety of subjects. A university is an organisation that provides both undergraduate education and postgraduate education...
law libraries retain extensive historical collections going back to the earliest English reports.

As of 2010, the American Bar Association has propounded rules requiring each law school's law library to include among its holdings the following "core collection":

The ABA further sets forth additional requirements, including the requirement that the law library have a full-time director, and sufficient staff to attend to the needs of the institution.