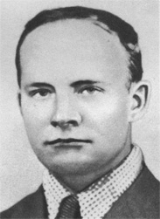 Encyclopedia
Latvian partisans were fighters in irregular military
Irregular military
Irregular military refers to any non-standard military. Being defined by exclusion, there is significant variance in what comes under the term. It can refer to the type of military organization, or to the type of tactics used....
groups participating in the Latvian resistance movement
Latvian resistance movement
A large number of Latvians resisted the occupation of Latvia by Nazi Germany. The Latvian resistance movement was divided between the pro-independence units under the Latvian Central Council and the pro-Soviet units under the Central Staff of the Partisan Movement in Moscow...
, including against Nazi Germany
Nazi Germany
Nazi Germany , also known as the Third Reich , but officially called German Reich from 1933 to 1943 and Greater German Reich from 26 June 1943 onward, is the name commonly used to refer to the state of Germany from 1933 to 1945, when it was a totalitarian dictatorship ruled by...
and collaborationism
Collaborationism
Collaborationism is cooperation with enemy forces against one's country. Legally, it may be considered as a form of treason. Collaborationism may be associated with criminal deeds in the service of the occupying power, which may include complicity with the occupying power in murder, persecutions,...
during
Collaboration during World War II
Within nations occupied by the Axis Powers, some citizens, driven by nationalism, ethnic hatred, anti-communism, anti-Semitism or opportunism, knowingly engaged in collaboration with the Axis Powers during World War II...
World War II
World War II
World War II, or the Second World War , was a global conflict lasting from 1939 to 1945, involving most of the world's nations—including all of the great powers—eventually forming two opposing military alliances: the Allies and the Axis...
.

The decisions of the 1917 congresses and the declaration of independence
On the Restoration of Independence of the Republic of Latvia
The Declaration "On the Restoration of Independence of the Republic of Latvia" was adopted on 4 May 1990, by the Supreme Soviet of the Latvian SSR...
on 18 November 1918, with Latgale
Latgale
Latgale is one of the four historical and cultural regions of Latvia recognised in the Constitution of the Latvian Republic. It is the easternmost region north of the Daugava River...
as part of the Latvia
Latvia
Latvia , officially the Republic of Latvia , is a country in the Baltic region of Northern Europe. It is bordered to the north by Estonia , to the south by Lithuania , to the east by the Russian Federation , to the southeast by Belarus and shares maritime borders to the west with Sweden...
n state, moved both the Military of Latvia as well as local partisans to struggle for the liberation of Latgale, a difficult task, given the territorial interests of both Bolshevik Russia and Poland. On June 10, 1919 the Lithuanian army
Military of Lithuania
The Lithuanian Armed Forces consist of ~14,500 active personnel . Conscription was ended in September 2008.Lithuania's defence system is based on the concept of "total and unconditional defence" mandated by Lithuania's national Security Strategy...
reached the territory controlled by Latvian partisans (Green Guard) and supplied them with munitions. 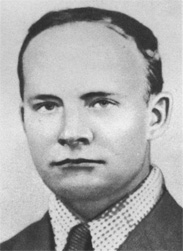 In Latvia the number of active combatants peaked at between 10,000 and 15,000, while the total number of resistance fighters was as high as 40,000. One author gives a figure of up to 12,000 grouped in 700 bands during the 1945 - 1955 decade, but definitive figures are unavailable. Over time, the partisans replaced their German weapons with Russian ones. The Central Command of Latvian resistance organizations maintained an office on Matīsa Street in Riga
Riga
Riga is the capital and largest city of Latvia. With 702,891 inhabitants Riga is the largest city of the Baltic states, one of the largest cities in Northern Europe and home to more than one third of Latvia's population. The city is an important seaport and a major industrial, commercial,...
until 1947. In some 3,000 raids, the partisans inflicted damage on uniformed military personnel, party cadres (particularly in rural areas), buildings, and ammunition depots. Communist authorities reported 1,562 Soviet personnel killed and 560 wounded during the entire resistance period. In Latvia, preparations for partisan operations were begun during the German occupation, but the leaders of these nationalist units were arrested by Nazi authorities. Longer-lived resistance units began to form during the last months of the war; their ranks were composed of a good number of Latvian Legion soldiers as well as civilians. The Latvian Forest Brothers
Forest Brothers
The Forest Brothers were Estonian, Latvian, and Lithuanian partisans who waged a guerrilla war against Soviet rule during the Soviet invasion and occupation of the three Baltic states during, and after, World War II...
were most active in the border regions. Areas where they were most active included Dundaga
Dundaga
Dundaga is a village in Courland, Latvia. From 2009 its an administrative centre of Dundaga municipality.Dundaga is famous for its castle from late 13th century, constructed by Archbishopric of Riga. From the 16th until the 20th century, Dundaga Castle was the centre of the largest private estate...
, Taurkalne, Lubāna
Lubana
Lubāna is a Latvian town situated in the district of Madona by the Aiviekste river. It acquired a town status in 1992, and the current population is 1974...
, Aloja
Aloja, Latvia
Aloja is a town in northern Latvia, close to the border with Estonia. It is within the country's Limbaži District.-See also:List of cities in Latvia...
, and Līvāni
Livani
Līvāni is a town in central Latvia. It is situated at the junction of the Dubna and Daugava rivers, approximately 170 kilometers east of Riga, the capital....
. In the eastern regions, they had ties with the Estonian Forest Brothers; in the western regions, with the Lithuanians. As in Estonia and Lithuania, the partisans were killed off and infiltrated by the MVD and NKVD
NKVD
The People's Commissariat for Internal Affairs was the public and secret police organization of the Soviet Union that directly executed the rule of power of the Soviets, including political repression, during the era of Joseph Stalin....
over time, and as in Estonia and Lithuania, Western assistance and intelligence was severely compromised by Soviet counter-intelligence
Counter-intelligence
Counterintelligence or counter-intelligence refers to efforts made by intelligence organizations to prevent hostile or enemy intelligence organizations from successfully gathering and collecting intelligence against them. National intelligence programs, and, by extension, the overall defenses of...
and Latvian double agents such as Augusts Bergmanis and Vidvuds Sveics. Furthermore, the Soviets gradually consolidated their rule in the cities, help from rural civilians was not as forthcoming, and special military and security units were sent to control the partisans. The last groups emerged from the forest and surrendered to the authorities in 1957.