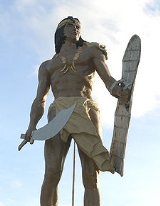 Overview
Lapu-Lapu was the ruler of Mactan, an island in the Visayas
Visayas
The Visayas or Visayan Islands and locally known as Kabisay-an gid, is one of the three principal geographical divisions of the Philippines, along with Mindanao and Luzon. It consists of several islands, primarily surrounding the Visayan Sea, although the Visayas are considered the northeast...
, Philippines
Philippines
The Philippines , officially known as the Republic of the Philippines , is a country in Southeast Asia in the western Pacific Ocean. To its north across the Luzon Strait lies Taiwan. West across the South China Sea sits Vietnam...
, who is known as the first native of the archipelago to have resisted the Spanish colonization. He is now regarded as the first Filipino hero.

On the morning of April 27, 1521, Lapu-Lapu led 1,500 Mactan warriors armed with barong
Barong (knife)
The barong is a thick, leaf-shaped, single-edged blade sword. It is a weapon used by Islamic tribes in the Southern Philippines.- Description :-Blade:...
, spears, kampilan
Kampilan
The kampílan is a type of single-edged long sword of the Filipino people. Being ancient origin, it has been used in the Philippine islands of Mindanao, Visayas, and Luzon for centuries, used for head-chopping....
and kalasag
Kalasag
The Kalasag is a large rectangular shield used by the natives in the Philippines. The shield is made of hardwood and is decorated with elaborate carvings. The wood comes from native trees such as the dapdap, polay and sablang. It was widely used throughout the archipelago for warfare...
, in a battle against Portuguese
Portugal
Portugal , officially the Portuguese Republic is a country situated in southwestern Europe on the Iberian Peninsula. Portugal is the westernmost country of Europe, and is bordered by the Atlantic Ocean to the West and South and by Spain to the North and East. The Atlantic archipelagos of the...
explorer and conquistador Ferdinand Magellan
Ferdinand Magellan
Ferdinand Magellan was a Portuguese explorer. He was born in Sabrosa, in northern Portugal, and served King Charles I of Spain in search of a westward route to the "Spice Islands" ....
who led a force of 549 Christian soldiers armed with guns in what would later be known as the Battle of Mactan
Battle of Mactan
The Battle of Mactan was fought in the Philippines on April 27, 1521. The warriors of Lapu-Lapu, a native chieftain of Mactan Island, defeated Spanish forces under the command of Ferdinand Magellan, who was killed in the battle.- Background :...
.

Describe the relationship of the different rajah and datus?
More

What kind of leader and warrior was lapu lapu?