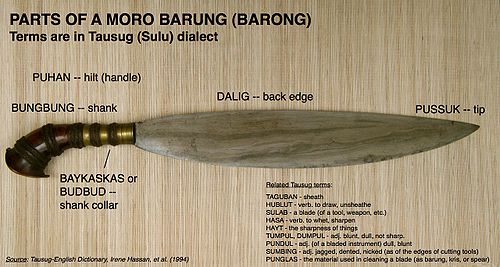 The barong is a thick, leaf-shaped, single-edged blade sword. It is a weapon used by Islamic tribes in the Southern Philippines.

Barung blades are thick and very heavy with the weight aiding in the slicing capability of the sword. Barong blade lengths range from 8 to 22 inches (20 to 56 cm). Newer blades, on the other hand, tend to be longer measuring at 18 to 22 inches (46 to 56 cm). Damascene patterns are also thick but again most often not as controlled as the more widely known kalis
Kalis
A kalis is a type of double-edged Filipino sword, often with a "wavy" section, similar to a kris. Unlike the kris, the Kalis's double-edged blade can be used for both cutting and thrusting....
. 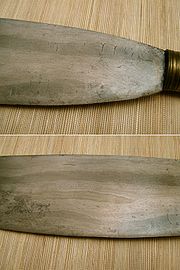 Most handles have a silver sleeve and lacquered braided fiber rings that sit on top. Nobility hilts were made of ivory, carabao
Carabao
The carabao or Bubalus bubalis carabanesis is a subspecies of the domesticated water buffalo found in the Philippines, Guam, Indonesia, Malaysia, and various parts of Southeast Asia...
horn, or kamagong
Kamagong
Kamagong or "Mabolo" is a fruit tree found only in the Philippines, the wood of which is extremely dense and hard, and famous for its dark color. It belongs to the ebony family , and like many other very hard woods is sometimes called "iron wood" so called because its wood is iron-like and nearly...
(Philippine ebony). Other barong swords have less elaborate hilts and are smaller in size. Common motifs include the cockatoo
Cockatoo
A cockatoo is any of the 21 species belonging to the bird family Cacatuidae. Along with the Psittacidae and the Strigopidae , they make up the parrot order Psittaciformes . Placement of the cockatoos as a separate family is fairly undisputed, although many aspects of the other living lineages of...
and naga
Naga
Naga or NAGA may refer to:* Nāga, a group of serpent deities in Hindu and Buddhist mythology.-People:* Nayan / Nayar/Nair people of Kerala Society* Naga people, a diverse ethnic identity in Northeast India...
(dragon). The long metal ferrule is most often made of silver, though copper, brass and swaasa is also used. Barongs used in World War II may also have aluminium ferrules. The ferrule tends to be around 8 cm (3 inches) in length. Often the ferrule will have lacquered braided natural fiber rings to aid in grip. Sometimes these fiber rings were on top of the ferrule, but often what would appear to be a solid metal ferrule would in fact be a number of metal bands that alternate between the fiber bands.

Cockatoo pommels tended to be made of banati. Higher end barongs belonging to the upper classes often had large elaborately carved junggayan (elongated) cockatoos. Barong for the lower classes, and the ones used for fighting, have less elaborate cockatoo pommels of much smaller sizes, often featuring de-emphasized crests or beaks (and on fighting versions mere vestigial elements of the crest and beak motifs). At one period near Word War II, cockatoo forms changed. Crests became more triangular, and began to emerge directly from the back of the pommel, whereas older cockatoo had crests that flowed from the butt-plain of the pommel. Also, beaks started to become more massive and rectangular in form. Barong used by juramentado
Juramentado
Juramentado, in Philippine history, refers to a male Moro swordsman who attacked and killed targeted Christian police and soldiers, expecting to be killed himself, the martyrdom undertaken as an unorthodox form of personal jihad...
s, or those who had taken the rite of Magsabil, often would feature smaller blades with normal size hilts.

Barong are weapons used by Datu
Datu
Datu is the title for tribal chiefs, sovereign princes, and monarchs in the Visayas and Mindanao Regions of the Philippines. Together with Lakan , Apo in Central and Northern Luzon, Sultan and Rajah, they are titles used for native royalty, and are still currently used in the Philippines...
s, Rajahs and Sultan
Sultan
Sultan is a title with several historical meanings. Originally, it was an Arabic language abstract noun meaning "strength", "authority", "rulership", and "dictatorship", derived from the masdar سلطة , meaning "authority" or "power". Later, it came to be used as the title of certain rulers who...
s.