Encyclopedia
Landskrona is a locality
Urban areas in Sweden
Urban area is a common English translation of the Swedish term tätort. The official term in English, used by Statistics Sweden, is, however, locality. There are 1,940 localities in Sweden . They could be compared with census-designated places in the United States.A tätort in Sweden has a minimum of...
and the seat of Landskrona Municipality
Landskrona Municipality
Landskrona Municipality is a municipality in Skåne County in Sweden. Its seat is located in the city of Landskrona.The island of Ven was added to the City of Landskrona in 1959. The amalgamations leading to the present municipality took place in 1967, 1969 and 1974...
, Skåne County
Skåne County
Skåne County is the southernmost administrative county or län, of Sweden, basically corresponding to the historical province Scania. It borders the counties of Halland, Kronoberg and Blekinge. The seat of residence for the Skåne Governor is the town of Malmö...
, Sweden
Sweden
Sweden , officially the Kingdom of Sweden , is a Nordic country on the Scandinavian Peninsula in Northern Europe. Sweden borders with Norway and Finland and is connected to Denmark by a bridge-tunnel across the Öresund....
with 28,670 inhabitants in 2005.

The foundation was done at a place for a fishing settlement, historical described as Sønder Sæby ("sønder" means "southern"). Still today exists a very small settlement just north of the town, known as Säby (Sæby in Danish). This probably was the Nørre Sæby ("nørre" means "northern") in the beginning of the 15:th century, but since the southern village became the town, the need for distinguish northern and southern Sæby
disappeared. The original name of the officially founded town was Landszkrone. But changed to Landskrone sometime before 1450.

The town supported the king Christian II of Denmark
Christian II of Denmark
Christian II was King of Denmark, Norway and Sweden , during the Kalmar Union.-Background:...
(1525), and opposed the Reformation
Protestant Reformation
The Protestant Reformation was a 16th-century split within Western Christianity initiated by Martin Luther, John Calvin and other early Protestants. The efforts of the self-described "reformers", who objected to the doctrines, rituals and ecclesiastical structure of the Roman Catholic Church, led...
in Denmark (1535), and in both cases found itself among the defeated. The Reformist King Christian III of Denmark
Christian III of Denmark
Christian III reigned as king of Denmark and Norway. He was the eldest son of King Frederick I and Anna of Brandenburg.-Childhood:...
abstained however from retaliation, and instead founded a castle
Castle
A castle is a type of fortified structure built in Europe and the Middle East during the Middle Ages by European nobility. Scholars debate the scope of the word castle, but usually consider it to be the private fortified residence of a lord or noble...
to protect the harbour. The castle, built where the monastery had been situated until the Reformation, was completed by 1560.

When Scania
Scania
Scania is the southernmost of the 25 traditional non-administrative provinces of Sweden, constituting a peninsula on the southern tip of the Scandinavian peninsula, and some adjacent islands. The modern administrative subdivision Skåne County is almost, but not totally, congruent with the...
had been ceded to Sweden in 1658, the good harbour and the strong fort were reasons for plans to make Landskrona a commercial center of the acquired territory with extraordinary privileges for foreign trade. The castle was reinforced by bastion
Bastion
A bastion, or a bulwark, is a structure projecting outward from the main enclosure of a fortification, situated in both corners of a straight wall , facilitating active defence against assaulting troops...
s, the area inside the moat
Moat
A moat is a deep, broad ditch, either dry or filled with water, that surrounds a castle, other building or town, historically to provide it with a preliminary line of defence. In some places moats evolved into more extensive water defences, including natural or artificial lakes, dams and sluices...
s extended to 400x400 meters, the castle was considered the strongest and most modern in Scandinavia
Scandinavia
Scandinavia is a cultural, historical and ethno-linguistic region in northern Europe that includes the three kingdoms of Denmark, Norway and Sweden, characterized by their common ethno-cultural heritage and language. Modern Norway and Sweden proper are situated on the Scandinavian Peninsula,...
, but was temporarily lost to the Danes after a comparably short siege July 8-August 2, 1676. The commandant Colonel Hieronymus Lindeberg was consequently sentenced to death for high treason.

Any further plans for Landskrona were however not realized, for various reasons. The continued Swedish-Danish wars favoured Karlskrona
Karlskrona
Karlskrona is a locality and the seat of Karlskrona Municipality, Blekinge County, Sweden with 35,212 inhabitants in 2010. It is also the capital of Blekinge County. Karlskrona is known as Sweden's only baroque city and is host to Sweden's only remaining naval base and the headquarters of the...
, located at a safer distance from Denmark, replacing Landskrona as a naval base, the fortifications were discontinued, and Malmö
Malmö
Malmö , in the southernmost province of Scania, is the third most populous city in Sweden, after Stockholm and Gothenburg.Malmö is the seat of Malmö Municipality and the capital of Skåne County...
remained the most important commercial town - despite Malmö lacking a harbour until the late 18th century. The fortifications at Landskrona were expanded considerably between 1747 and 1788, but were condemned in 1822, whereafter the garrison was abolished in 1869. The walls and moats of the fortifications are today a beautiful recreational area, commonly known as the Landskrona Citadel
Landskrona Citadel
Landskrona Citadel, , is situated in Landskrona, Scania, southern Sweden. Initially built 1549-1559 as a purely defensive fortification with a 70 metre wide moat....
. On its northern side an allotment-garden area of cottages was founded in the final years of the 19:th century. It's the oldest of its kind in Sweden today.

After the industrial revolution and the urbanization the town grew fast. During the first World War a large shipyard, Öresundsvarvet was started. But after the war the fast growing of Landskrona slowed down while nearby towns like Helsingborg, Lund and Malmö continued to grow. In the mid 1970's the shipyard had more than 3500 people employed - and the town had only 30.000 inhabitants (38.000 in the municipality). When the shipyard closed in 1983 a 20 year long depression began. But slowly the town has recovered.
In 2001 a new railway station was inaugurated. This was very importaint for the town, since the old station was a terminal
for southbound trains only. The new station is along the dual fast railway between Copenhagen
Copenhagen
Copenhagen is the capital and largest city of Denmark, with an urban population of 1,199,224 and a metropolitan population of 1,930,260 . With the completion of the transnational Øresund Bridge in 2000, Copenhagen has become the centre of the increasingly integrating Øresund Region...
and Göteborg, and all trains stop at the station.

Since January 2001 Landskrona has a new railway station on the West Coast railway between Lund
Lund
-Main sights:During the 12th and 13th centuries, when the town was the seat of the archbishop, many churches and monasteries were built. At its peak, Lund had 27 churches, but most of them were demolished as result of the Reformation in 1536. Several medieval buildings remain, including Lund...
and Gothenburg
Gothenburg
Gothenburg is the second-largest city in Sweden and the fifth-largest in the Nordic countries. Situated on the west coast of Sweden, the city proper has a population of 519,399, with 549,839 in the urban area and total of 937,015 inhabitants in the metropolitan area...
along the Swedish west coast. The connection between the new station and the city centre, "The Station Shuttle," is operated with trolleybus
Trolleybus
A trolleybus is an electric bus that draws its electricity from overhead wires using spring-loaded trolley poles. Two wires and poles are required to complete the electrical circuit...
es from 27 September 2003. Landskrona is now the only city in Sweden operating trolleybuses.

Landskrona is twinned
Town twinning
Twin towns and sister cities are two of many terms used to describe the cooperative agreements between towns, cities, and even counties in geographically and politically distinct areas to promote cultural and commercial ties.- Terminology :...
with: Kołobrzeg, Poland
Poland
Poland , officially the Republic of Poland , is a country in Central Europe bordered by Germany to the west; the Czech Republic and Slovakia to the south; Ukraine, Belarus and Lithuania to the east; and the Baltic Sea and Kaliningrad Oblast, a Russian exclave, to the north... 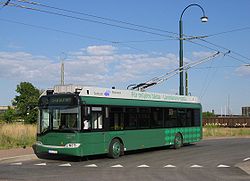