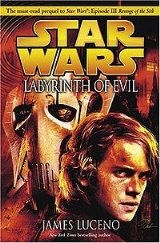 Encyclopedia
Labyrinth of Evil is a 2005 novel
Novel
A novel is a book of long narrative in literary prose. The genre has historical roots both in the fields of the medieval and early modern romance and in the tradition of the novella. The latter supplied the present generic term in the late 18th century....
by James Luceno
James Luceno
James Luceno is The New York Times bestselling author of three Star Wars: The New Jedi Order novels, Agents of Chaos: Hero's Trial, Agents of Chaos: Jedi Eclipse and The Unifying Force....
set in the fictional Star Wars
Star Wars
Star Wars is an American epic space opera film series created by George Lucas. The first film in the series was originally released on May 25, 1977, under the title Star Wars, by 20th Century Fox, and became a worldwide pop culture phenomenon, followed by two sequels, released at three-year...
universe
Fictional universe
A fictional universe is a self-consistent fictional setting with elements that differ from the real world. It may also be called an imagined, constructed or fictional realm ....
. The events of this novel occur just before Star Wars Episode III: Revenge of the Sith
Star Wars Episode III: Revenge of the Sith
Star Wars Episode III: Revenge of the Sith is a 2005 American epic space opera film written and directed by George Lucas. It is the sixth and final film released in the Star Wars saga and the third in terms of the series' internal chronology....
, overlapping with the events of the second season of Star Wars: Clone Wars.

On the planet Cato Neimoidia, Jedi
Jedi
The Jedi are characters in the Star Wars universe and the series's main protagonists. The Jedi use a power called the Force and weapons called lightsabers, which emit a controlled energy flow in the shape of a sword, in order to serve and protect the Republic and the galaxy at large from conflict...
generals Obi-Wan Kenobi
Obi-Wan Kenobi
Obi-Wan Kenobi is a fictional character in the Star Wars universe. He is one of several primary characters in the Star Wars series. Along with Darth Vader, R2-D2, and C-3PO, he is one of the few major characters to appear in all six Star Wars films...
and Anakin Skywalker lead clone troopers to capture Nute Gunray
Nute Gunray
Nute Gunray is a fictional character and supporting villain from the Star Wars universe, played by Silas Carson in the films. Besides Palpatine , he is the only villain to appear in all three episodes of the prequel trilogy....
, Trade Federation
Trade Federation
The Trade Federation is a fictional organization in the Star Wars universe at the time of the Galactic Republic. It appears in the franchise's three prequel movies and the Star Wars Expanded Universe...
viceroy
Viceroy
A viceroy is a royal official who runs a country, colony, or province in the name of and as representative of the monarch. The term derives from the Latin prefix vice-, meaning "in the place of" and the French word roi, meaning king. A viceroy's province or larger territory is called a viceroyalty...
and one of the leaders of the Separatists. Gunray narrowly escapes to rendezvous with General Grievous
General Grievous
General Grievous is a fictional character in the Star Wars universe, an antagonist in Star Wars Episode III: Revenge of the Sith. He was voiced by Matthew Wood...
and the rest of the Separatist Council, but he leaves behind his walking chair equipped with a specially-constructed holotransceiver. Republic
Galactic Republic (Star Wars)
The Galactic Republic is the name of the interplanetary State used in the fictional Star Wars universe prior to the establishment of the Galactic Empire. The form of this government, created by the Senate, was introduced in the Prequel Trilogy. By the time of the original Star Wars trilogy, it is...
analysts find the afterimage
Afterimage
An afterimage or ghost image or image burn-in is an optical illusion that refers to an image continuing to appear in one's vision after the exposure to the original image has ceased...
of Darth Sidious
Palpatine
Palpatine is a fictional character and the main antagonist of the Star Wars saga, portrayed by Ian McDiarmid in the feature films.Palpatine first appeared as the unnamed Emperor of the Galactic Empire in the 1980 film Star Wars Episode V: The Empire Strikes Back...
, the Sith Lord
Sith
-Sith:The Sith is a name applied to certain characters in the Star Wars universe. In the films they are the central antagonists. They are capable of using the dark side of the Force.-The Invention of the Sith:...
who masterminded the Clone Wars
Clone Wars (Star Wars)
The Clone Wars are a series of fictional intragalactic battles in George Lucas's science fiction saga Star Wars. The conflict is first mentioned in the film Star Wars Episode IV: A New Hope , but no details are given , and the wars themselves are not featured until the series' fifth and sixth...
. However, this puts the Jedi no closer to finding Sidious himself.

While Kenobi and Skywalker pursue the constructor of the chair, General Grievous is commanded by Sidious through his apprentice Count Dooku
Count Dooku
Count Dooku is a fictional character from the Star Wars universe. Dooku is one of the main antagonists of both Star Wars Episode II: Attack of the Clones and the events of the Clone Wars and is a supporting villain in Star Wars Episode III: Revenge of the Sith. Count Dooku plays a substantial role...
to relocate the Separatist Council to Belderone, where a Republic fleet lies in wait for them. Furious, Grievous learns that Gunray lost the holotransceiver. Republic Intelligence find the signature of the artist that designed the mechno-chair that Sidious provided Gunray. Kenobi and Skywalker seek out the artist, a Xi Charrian, who tells them to find the designer, contracted by Sidious, to build the holotransceiver built into the mechno-chair. The Jedi find the designer in a prison, where he tells them that he built two holotransceivers, one for the mechno-chair, another for a ship of unknown design. The designer knows the identity of the pilot that delivered the ship to its owners (Darth Maul
Darth Maul
Darth Maul is a fictional character in the science fiction saga Star Wars. He is one of the main antagonists of Star Wars Episode I: The Phantom Menace, portrayed by martial artist Ray Park and voiced by Peter Serafinowicz....
and Sidious). The pilot, a Lethan Twi'lek, is discovered on a moon by the Jedi, and she describes to the Jedi the location of the delivered ship: a columnar building in The Works, a desolate industrial park on Coruscant
Coruscant
Coruscant is a planet in the fictional Star Wars universe. It first appeared onscreen in the 1997 Special Edition of Star Wars Episode VI: Return of the Jedi, but was first mentioned in Timothy Zahn's 1991 novel Heir to the Empire...
.

On Coruscant, Supreme Chancellor Palpatine
Palpatine
Palpatine is a fictional character and the main antagonist of the Star Wars saga, portrayed by Ian McDiarmid in the feature films.Palpatine first appeared as the unnamed Emperor of the Galactic Empire in the 1980 film Star Wars Episode V: The Empire Strikes Back...
resists the Jedi Council
Jedi Council
The Jedi High Council is a fictional institution from the Star Wars film series. The Jedi Council are the strongest members of the Jedi Order, and are elected to lead the Jedi.-History:...
's suggestion to recall Jedi from the Outer Rim worlds due to the Separatist threat. Palpatine's increased calls for public surveillance
Surveillance
Surveillance is the monitoring of the behavior, activities, or other changing information, usually of people. It is sometimes done in a surreptitious manner...
and restriction on freedom of movement and action prompt Senators Padmé Amidala
Padmé Amidala
Padmé Amidala is a fictional character in the Star Wars science fiction franchise. She first appeared on film in the 1999 feature film, Star Wars Episode I: The Phantom Menace, as the young queen of the planet Naboo. In subsequent prequel trilogy films, Padmé represents Naboo in the Galactic Senate...
, Bail Organa, and Mon Mothma to persuade him to pull back from the brink. Palpatine somehow knows Sidious' name and orders the Jedi and Republic intelligence to hunt him down. In the bowels of the planet, trace elements lead Jedi Mace Windu
Mace Windu
Mace Windu is a fictional character in the Star Wars universe, most famously portrayed by actor Samuel L. Jackson in the prequel films. However, Windu has also been voiced by other actors in assorted video game and animated projects....
, Shaak Ti and Republic intelligence to track down the same Darth Sidious that Count Dooku
Count Dooku
Count Dooku is a fictional character from the Star Wars universe. Dooku is one of the main antagonists of both Star Wars Episode II: Attack of the Clones and the events of the Clone Wars and is a supporting villain in Star Wars Episode III: Revenge of the Sith. Count Dooku plays a substantial role...
had been meeting with, the tower described by the Twi'lek pilot. The Jedi/Intelligence team are led through endless tunnels, but find a trail of evidence that leads to the Senate district. Here, the trail grows cold at the base of 500 Republica, the personal quarters of many of Coruscant's finest. At 500 Republica, a Republic Intelligence agent named Captain Dyne was separated from the Jedi, and was the first of the Republic to realize who Darth Sidious is; he was astonished to learn that the Sith really do rule the galaxy
Star Wars Galaxy
Star Wars Galaxy may mean:* Star Wars Galaxies, a Star Wars themed MMORPG platform for Microsoft Windows* Star Wars galaxy, the fictional galaxy where the setting of the Star Wars saga occurs...
. He died with the satisfaction of escaping the war. Before the search for the Sith Lord can proceed further, General Grievous leads an invasion of Coruscant that results in the capture of the Supreme Chancellor himself.

As Coruscant is invaded by Separatist forces, Kenobi and Skywalker, fresh from an encounter with Dooku on the former industrial world of Tythe, use orbital hyperspace
Hyperspace (science fiction)
Hyperspace is a plot device sometimes used in science fiction. It is typically described as an alternative region of space co-existing with our own universe which may be entered using an energy field or other device...
rings to depart for Coruscant. The novel ends "To Be Concluded".


Revenge of the Sith

The Supreme Chancellor effectively orders the Jedi on a wild-goose chase. But since certain Jedi trace the trail of his real identity back to Coruscant (see Yoda
Yoda
Yoda is a fictional character in the Star Wars universe, appearing in the second and third original films, as well as all three prequel trilogy films. A renowned Jedi master, Yoda made his first on-screen appearance in Star Wars Episode V: The Empire Strikes Back where he is responsible for...
's ability to sense him on Coruscant, as well as Windu's investigations) he orchestrates his own kidnapping to end the chase and to further Anakin's eventual turn to the dark side
Dark side (Star Wars)
The dark side of the Force is a prominent moral, philosophical, and psychic concept in the Star Wars universe. It is introduced in Star Wars Episode IV: A New Hope, and appears in all subsequent Star Wars fiction...
.

After Kenobi, Anakin, and Palpatine crash land on Coruscant, Anakin and Kenobi have a brief conversation about who owes whom what. Obi-Wan mentions that "that time on Cato Nemoidia doesn't count."