Encyclopedia
La Maddalena is a town and comune
Comune
In Italy, the comune is the basic administrative division, and may be properly approximated in casual speech by the English word township or municipality.-Importance and function:...
located on the island with the same name, in northern Sardinia
Sardinia
Sardinia is the second-largest island in the Mediterranean Sea . It is an autonomous region of Italy, and the nearest land masses are the French island of Corsica, the Italian Peninsula, Sicily, Tunisia and the Spanish Balearic Islands.The name Sardinia is from the pre-Roman noun *sard[],...
, part of the province of Olbia-Tempio
Province of Olbia-Tempio
Olbia-Tempio is the name of a province in the autonomous region of Sardinia, Italy.The territory includes the historical region of Gallura , the northeastern coast of Sardinia , and the island of La Maddalena ....
, Italy. 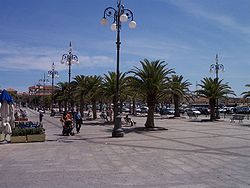 La Maddalena is the largest town in the Maddalena archipelago
Maddalena archipelago
The Maddalena Archipelago is a group of islands in the Straits of Bonifacio between Corsica and north-eastern Sardinia, Italy. It consists of seven main islands and numerous other small islets.-Geography:...
, just 2 kilometres from the northeastern shore of Sardinia
Sardinia
Sardinia is the second-largest island in the Mediterranean Sea . It is an autonomous region of Italy, and the nearest land masses are the French island of Corsica, the Italian Peninsula, Sicily, Tunisia and the Spanish Balearic Islands.The name Sardinia is from the pre-Roman noun *sard[],...
and sitting in the Straits of Bonifacio, between it and Corsica
Corsica
Corsica is an island in the Mediterranean Sea. It is located west of Italy, southeast of the French mainland, and north of the island of Sardinia....
.

The focal-point of pedestrian activity is found around Piazza Umberto I (formerly known as Piazza Rossa-the older generation of natives in town still commonly refer to the piazza by its original name). There is an adjacent via (Garibaldi) that connects the port (Banchina Commerciale I) facing the Island of Santo Stefano and Piazza Umberto I with city hall. Via Garibaldi is surrounded by commercial shops, restaurants, and bars.

La Maddalena now derives much of its income from tourism
Tourism
Tourism is travel for recreational, leisure or business purposes. The World Tourism Organization defines tourists as people "traveling to and staying in places outside their usual environment for not more than one consecutive year for leisure, business and other purposes".Tourism has become a...
. The only method of traveling to La Maddalena is by boat, with car ferries travelling from nearby Palau and from the Italian mainland.

The natives of La Maddalena speak a Sardo-Corsican dialect known as Maddalenino. A comprehensive survey on the dialect, including a concise history of the island and its people, can be found in Renzo De Martino's Il dizionario maddalenino: Glossario etimologico comparato

The island of Maddalena is renowned for its beaches; it is characterized by rocky granitic terrain and has some ancient fortifications. Spalmatore and Bassa Trinita are two popular beaches. It is connected by causeway with the nearby island of Caprera
Caprera
Caprera is a small island off the coast of Sardinia, Italy, located in the Maddalena archipelago.In the area of La Maddalena island in the Strait of Bonifacio, it is a tourist destination and is famous as the place to which Giuseppe Garibaldi retired .This island has been declared a natural reserve...
, famous as the residence of the Italian revolutionary Giuseppe Garibaldi
Giuseppe Garibaldi
Giuseppe Garibaldi was an Italian military and political figure. In his twenties, he joined the Carbonari Italian patriot revolutionaries, and fled Italy after a failed insurrection. Garibaldi took part in the War of the Farrapos and the Uruguayan Civil War leading the Italian Legion, and...
.

The Maddalena archipelago, is known from archaeological evidence to have been occupied in prehistoric times, but its written history begins with the Roman Empire
Roman Empire
The Roman Empire was the post-Republican period of the ancient Roman civilization, characterised by an autocratic form of government and large territorial holdings in Europe and around the Mediterranean....
. The islands were the object of a dispute between the Republics of Pisa
Republic of Pisa
The Republic of Pisa was a de facto independent state centered on the Tuscan city of Pisa during the late tenth and eleventh centuries. It rose to become an economic powerhouse, a commercial center whose merchants dominated Mediterranean and Italian trade for a century before being surpassed and...
and Genoa
Republic of Genoa
The Most Serene Republic of Genoa |Ligurian]]: Repúbrica de Zêna) was an independent state from 1005 to 1797 in Liguria on the northwestern Italian coast, as well as Corsica from 1347 to 1768, and numerous other territories throughout the Mediterranean....
in the 12th century and were later abandoned only to be recolonised by Corsican shepherds and later by the first Sardinian settlers in the 16th century.

La Maddalena has undergone many name changes: the Romans named it Ilva, Fussa and Bucina and in the Middle Ages the island was known as "Bicinara" before being given the name of Santa Maria Magdalena in the 16th century. After this it finally became known as La Maddalena.

Its location in the Strait of Bonifacio, through which much maritime traffic must pass, has turned the archipelago into a strategic military position. In 1767 it was occupied by the Savoy-Piedmont
House of Savoy
The House of Savoy was formed in the early 11th century in the historical Savoy region. Through gradual expansion, it grew from ruling a small county in that region to eventually rule the Kingdom of Italy from 1861 until the end of World War II, king of Croatia and King of Armenia...
ese occupy the island. A base was established here by the Italian Regia Marina
Regia Marina
The Regia Marina dates from the proclamation of the Kingdom of Italy in 1861 after Italian unification...
(Royal Navy) in 1887. In 1943, during World War II, Benito Mussolini
Benito Mussolini
Benito Amilcare Andrea Mussolini was an Italian politician who led the National Fascist Party and is credited with being one of the key figures in the creation of Fascism....
was briefly held prisoner here.

From 1973 through 2008, there was a NATO base on the nearby island of Santo Stefano. The NATO base housed an Italian Navy
Marina Militare
The Italian Navy is the navy of the Italian Republic. It is one of the four branches of military forces of Italy; formed in 1946, from what remained of the Regia Marina . As of 2008, the Italian Navy had 35,200 active personnel with 180 commissioned ships, 19 Floating Docks, and 123 aircraft...
barracks and it served as the home port for several US Navy submarine tenders over the years, ending with the departure of the , which set sail for its new home port of Bremerton, Washington. The US Naval Base officially closed in January 2008, ending the 35 year US presence in La Maddalena.

During the period in which the American military had a presence on the island, the most noteworthy event happened on October 25, 2003 when submarine ran aground
USS Hartford grounding
On 25 October, 2003, the , a United States Navy nuclear powered Los Angeles-class submarine ran aground while performing routine maneuvers in the harbour of La Maddalena, Sardinia. Approximately 9 million dollars worth of damage were done to the submarine, and it was out of service for seven months...
with sufficient force to substantially damage its rudders, sonar and electronics.

The 35th G8 Summit
35th G8 summit
The 35th G8 summit took place in the city of L'Aquila, Abruzzo, on July 8–10, 2009. It was moved from the Sardinian seaside city of La Maddalena as part of an attempt to redistribute disaster funds after the 2009 L'Aquila earthquake.....
, chaired by Prime Minister Silvio Berlusconi, was going to be held in La Maddalena in 2009, but then it was moved to L'Aquila
L'Aquila
L'Aquila is a city and comune in central Italy, both the capital city of the Abruzzo region and of the Province of L'Aquila. , it has a population of 73,150 inhabitants, but has a daily presence in the territory of 100,000 people for study, tertiary activities, jobs and tourism...
.