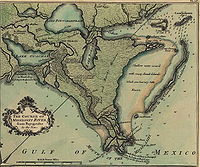 La Balize, Louisiana, was the first French
France
The French Republic , The French Republic , The French Republic , (commonly known as France , is a unitary semi-presidential republic in Western Europe with several overseas territories and islands located on other continents and in the Indian, Pacific, and Atlantic oceans. Metropolitan France...
fort and settlement near the mouth of the Mississippi River
Mississippi River
The Mississippi River is the largest river system in North America. Flowing entirely in the United States, this river rises in western Minnesota and meanders slowly southwards for to the Mississippi River Delta at the Gulf of Mexico. With its many tributaries, the Mississippi's watershed drains...
in what became Plaquemines Parish. The village's name (also spelled La Balise) meant "seamark". Inhabited by 1699, La Balize was one of the oldest French settlements within the current boundaries of Louisiana
Louisiana
Louisiana is a state located in the southern region of the United States of America. Its capital is Baton Rouge and largest city is New Orleans. Louisiana is the only state in the U.S. with political subdivisions termed parishes, which are local governments equivalent to counties...
. Historically and economically important for overseeing the river, it was rebuilt several times because of hurricane damage. The active delta lobe of the river's mouth is called the Balize Delta
Mississippi River Delta
The Mississippi River Delta is the modern area of land built up by alluvium deposited by the Mississippi River as it slows down and enters the Gulf of Mexico...
, after the settlement, or the Birdfoot Delta, because of its shape.

La Balize was inhabited chiefly by fishermen, river pilots, and their families. The pilots were critical to helping ships navigate to and from the port of New Orleans through the shifting passages, currents and sandbars of the river's delta front. The village was vulnerable to seasonal hurricanes. Washed away in a hurricane of 1740, the village was rebuilt on the newly emerged island of San Carlos. That village in turn was damaged severely several times and finally destroyed.

When the explorer Robert de La Salle claimed the land in 1682 for the French crown, he identified this site near the mouth of the Mississippi as important. It was at a point just above two major forks in the river, so passage could be controlled. By 1699 the first settlers inhabited a "rude little fort" built in the marshes, making this one of the oldest settlements in the colony. A map drawn about 1720 showed the mouth of the Mississippi with the different forks of the river, and the isle and fort of La Balize. By 1721 the French had constructed a 62 feet (18.9 m)-high wooden pyramid as la balize at the settlement. It sat relatively high above the mud and marshes of the delta wetlands.

By 1718 the center of the French colony was in New Orleans. In the early 18th century, the Roman Catholic Church quickly established seven pioneer parishes in the Louisiana colony, among them the parish at La Balize, founded in 1722. The French also founded four pioneer parishes in early villages of what are now Mississippi and Alabama. After the establishment of La Balize, the King commissioned Nicolas Godefroy Barbin to serve as the "Garde Magazin" (chief administrator) there. That commission, signed in 1703 by the King and his minister Jérôme Phélypeaux
Jérôme Phélypeaux
Jérôme Phélypeaux , comte de Pontchartrain, was a French politician, son of Louis Phélypeaux.He served as a councillor to the parlement of Paris from 1692, and served with his father as Secretary of State of the Maison du Roi and Navy Minster from 1699 onwards...
comte de Pontchartrain, was significant in that it recognized the strategic importance of La Balize.

Despite the vulnerability of the low-lying site to hurricanes, the French and later settlers needed to control the mouth of the Mississippi and have a place where pilots could meet the ships. They always rebuilt. The complicated conditions on the Mississippi River required ships to have river pilots to help them navigate the bar, with its changing currents, mud and sandbars, and avoid going aground. After the Americans took control of the territory by the Louisiana Purchase
Louisiana Purchase
The Louisiana Purchase was the acquisition by the United States of America of of France's claim to the territory of Louisiana in 1803. The U.S...
in 1803, they sometimes called the village Pilotsville. With the advent of steam tugboats in the 19th century, the pilots had more power to maneuver oceangoing ships in the river.

Not only did hurricanes destroy the settlements, but engineers started working early to try to improve entry at the river mouth. In 1726 French engineers dragged an iron harrow through sandbanks to make it easier for ships to pass the bar. Other elements which pilots and captains had to deal with at the mouth of the Mississippi were changing passages. The main ship passage changed four times before 1888. In 1750 the main passage was at the Northeast Pass (part of Pass á Loutre), then in succession it was at Southeast Pass (also in Pass á Loutre), Southwest Pass, and South Pass
South Pass
South Pass is two mountain passes on the Continental Divide in the Rocky Mountains in southwestern Wyoming. The passes are located in a broad low region, 35 miles broad, between the Wind River Range to the north and the Oregon Buttes and Great Divide Basin to the south, in southwestern Fremont...
. The main ship passage is again in the Southwest Pass.

Historical records for La Balize documented the long struggle of the French, Spanish and Americans to maintain this critical site at the delta front:


The hurricanes of 1860 persuaded the pilots and their families to rebuild further upriver, which they did about five miles (8 km) away, on the east bank of the Mississippi. The new settlement was named Pilottown. At its peak of population in the 19th century, it had about 800 residents. A school for children operated into the 20th century. Today the pilots usually stay there only temporarily for work shifts.


Large flights of pelicans were seen standing upon the long masses of mud which
rose above the surface of the waters, and a pilot came to guide us over the bar, long before
any other indication of land was visible.

I never beheld a scene so utterly desolate as this entrance of the Mississippi. Had Dante
DANTE
Delivery of Advanced Network Technology to Europe is a not-for-profit organisation that plans, builds and operates the international networks that interconnect the various national research and education networks in Europe and surrounding regions...

seen it, he might have drawn images of another Bolgia
Malebolge
In Dante Alighieri's Inferno, part of the Divine Comedy, Malebolge is the eighth circle of Hell. Roughly translated from Italian, Malebolge means "evil ditches". Malebolge is a large, funnel-shaped cavern, itself divided into ten concentric circular trenches or ditches. Each trench is called a bolgia...
from its horrors.


One only object rears itself above the eddying waters; this is the mast of a vessel long since wrecked in attempting to cross the bar, and it still stands, a dismal witness of the destruction that has been, and a boding prophet of that which is to come.


By degrees bulrushes of enormous growth become visible, and a few more miles of mud brought
us within sight of a cluster of huts called the Balize, by far the most miserable station
that I ever saw made the dwelling of man, but I was told that many families of pilots and
fishermen lived there.

Élisée Reclus
Élisée Reclus
Élisée Reclus , also known as Jacques Élisée Reclus, was a renowned French geographer, writer and anarchist. He produced his 19-volume masterwork La Nouvelle Géographie universelle, la terre et les hommes , over a period of nearly 20 years...
, a young Frenchman who later became a renowned geographer
Geographer
A geographer is a scholar whose area of study is geography, the study of Earth's natural environment and human society.Although geographers are historically known as people who make maps, map making is actually the field of study of cartography, a subset of geography...
and anarchist, recounted his trip up the Mississippi in early 1853:


Thanks to the speed of the tugboat, we advanced rapidly. I folded all my newspapers and stopped thinking about Sebastopol
Sevastopol
Sevastopol is a city on rights of administrative division of Ukraine, located on the Black Sea coast of the Crimea peninsula. It has a population of 342,451 . Sevastopol is the second largest port in Ukraine, after the Port of Odessa....
to observe the appearance of the Southwest Pass, the main mouth of the Mississippi, in all its details. Several miles in front of the ship, a long, thin black line seemed to extend across the sea like an immense jetty
Jetty
A jetty is any of a variety of structures used in river, dock, and maritime works that are generally carried out in pairs from river banks, or in continuation of river channels at their outlets into deep water; or out into docks, and outside their entrances; or for forming basins along the...
. Beyond this dark line, the river appeared like a great white silk ribbon, then came another black line parallel to the first, and farther away the blue waters of the sea stretched out to the grey curve of the horizon. The Mississippi resembled a canal advancing toward the open sea between two long jetties, and the 40 or 50 ships, whose tapered masts we saw standing out vaguely against the sky, completed the picture. It is a spectacle that some day will be witnessed, on a much reduced scale, at the Suez Canal
Suez Canal
The Suez Canal , also known by the nickname "The Highway to India", is an artificial sea-level waterway in Egypt, connecting the Mediterranean Sea and the Red Sea. Opened in November 1869 after 10 years of construction work, it allows water transportation between Europe and Asia without navigation...
planned for the waters of the Mediterranean.