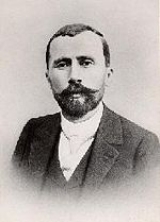 He was the son of an engineer. He began his scientific career in 1880, when he entered the meteorological department of the Bureau Central Météorologique (Administrative Center of National Meteorology, a department of the French government) in Paris
Paris
Paris is the capital and largest city in France, situated on the river Seine, in northern France, at the heart of the Île-de-France region...
under E. E. N. Mascart
Éleuthère Mascart
Éleuthère Élie Nicolas Mascart was a noted French physicist, a researcher in optics and electricity.Mascart was born in Quarouble, Nord. He attended the École normale supérieure...
. In 1883, 1885 and 1887 he made journeys to North Africa
North Africa
North Africa or Northern Africa is the northernmost region of the African continent, linked by the Sahara to Sub-Saharan Africa. Geopolitically, the United Nations definition of Northern Africa includes eight countries or territories; Algeria, Egypt, Libya, Morocco, South Sudan, Sudan, Tunisia, and...
to study geology and terrestrial magnetism, and during this, period published some important charts of the distribution of pressure at a height of 4,000 metres. Between 1892 and 1896, Teisserenc de Bort was chief meteorologist to the Bureau.

After his resignation from the Bureau in 1896, he established a private meteorological observatory in Trappes
Trappes
Trappes is a commune in the Yvelines department in the Île-de-France in north-central France. It is located in the western suburbs of Paris from the center in the new town of Saint-Quentin-en-Yvelines.-Transport:...
near Versailles
Versailles
Versailles , a city renowned for its château, the Palace of Versailles, was the de facto capital of the kingdom of France for over a century, from 1682 to 1789. It is now a wealthy suburb of Paris and remains an important administrative and judicial centre...
. There he carried out investigations on clouds and the problems of the upper air. He conducted experiments with high-flying instrumented hydrogen
Hydrogen
Hydrogen is the chemical element with atomic number 1. It is represented by the symbol H. With an average atomic weight of , hydrogen is the lightest and most abundant chemical element, constituting roughly 75% of the Universe's chemical elemental mass. Stars in the main sequence are mainly...
balloons and was one of the first people to use such devices.

In 1898, Teisserenc de Bort published an important paper in Comptes Rendus detailing his researches by means of balloons into the constitution of the atmosphere. He noticed that while the air temperature
Temperature
Temperature is a physical property of matter that quantitatively expresses the common notions of hot and cold. Objects of low temperature are cold, while various degrees of higher temperatures are referred to as warm or hot...
decreased steadily up to approximately 11 kilometers of height, it remained constant above that altitude
Altitude
Altitude or height is defined based on the context in which it is used . As a general definition, altitude is a distance measurement, usually in the vertical or "up" direction, between a reference datum and a point or object. The reference datum also often varies according to the context...
(up to the highest points he could reach). In other words, he discovered an indication of a temperature inversion or at least of a zero lapse rate above this altitude. For many years he was uncertain whether he discovered a true physical phenomenon or whether his measurements suffered from a systematic bias
Bias
Bias is an inclination to present or hold a partial perspective at the expense of alternatives. Bias can come in many forms.-In judgement and decision making:...
(indeed, the first measurements did have a positive temperature bias as the instruments were liable to radiative heating by solar radiation). That is why Teisserenc de Bort carried out 200+ more balloon experiments (with a substantial part of them being held during the night to eliminate radiative heating) until 1902, when he suggested that the atmosphere was divided into two layers.

During the years that followed, he named the two layers of the atmosphere
Earth's atmosphere
The atmosphere of Earth is a layer of gases surrounding the planet Earth that is retained by Earth's gravity. The atmosphere protects life on Earth by absorbing ultraviolet solar radiation, warming the surface through heat retention , and reducing temperature extremes between day and night...
known as the "troposphere
Troposphere
The troposphere is the lowest portion of Earth's atmosphere. It contains approximately 80% of the atmosphere's mass and 99% of its water vapor and aerosols....
" and the "stratosphere
Stratosphere
The stratosphere is the second major layer of Earth's atmosphere, just above the troposphere, and below the mesosphere. It is stratified in temperature, with warmer layers higher up and cooler layers farther down. This is in contrast to the troposphere near the Earth's surface, which is cooler...
". This naming convention has since been maintained, with (higher-altitude) layers that were subsequently discovered being given names of this sort. After Teisserenc de Bort's death in 1913, the heirs donated the observatory to the state so that the research tasks could be continued.

He also carried out investigations in Sweden
Sweden
Sweden , officially the Kingdom of Sweden , is a Nordic country on the Scandinavian Peninsula in Northern Europe. Sweden borders with Norway and Finland and is connected to Denmark by a bridge-tunnel across the Öresund....
and over the Zuider Zee
Zuider Zee
The Zuiderzee was a shallow bay of the North Sea in the northwest of the Netherlands, extending about 100 km inland and at most 50 km wide, with an overall depth of about 4 to 5 metres and a coastline of about 300 km . It covered...
, the Mediterranean and the tropical region of the Atlantic, and fitted out a special vessel in order to study the currents above the trade winds. He was elected a fellow of the Royal Meteorological Society
Royal Meteorological Society
The Royal Meteorological Society traces its origins back to 3 April 1850 when the British Meteorological Society was formed as a society the objects of which should be the advancement and extension of meteorological science by determining the laws of climate and of meteorological phenomena in general...
in 1903, honorary member in 1909, and was awarded the Symons gold medal of the Society in 1908. He collaborated with Hugo Hildebrandsson in Les bases de la météorologie dynamique (1907).