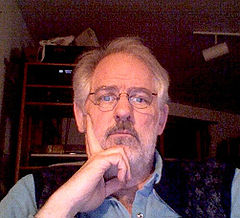 Kyle Eugene Gann is an American professor of music, critic and composer
Composer
A composer is a person who creates music, either by musical notation or oral tradition, for interpretation and performance, or through direct manipulation of sonic material through electronic media...
born in Dallas
Dallas, Texas
Dallas is the third-largest city in Texas and the ninth-largest in the United States. The Dallas-Fort Worth Metroplex is the largest metropolitan area in the South and fourth-largest metropolitan area in the United States...
, Texas
Texas
Texas is the second largest U.S. state by both area and population, and the largest state by area in the contiguous United States.The name, based on the Caddo word "Tejas" meaning "friends" or "allies", was applied by the Spanish to the Caddo themselves and to the region of their settlement in...
. As a critic for The Village Voice
The Village Voice
The Village Voice is a free weekly newspaper and news and features website in New York City that features investigative articles, analysis of current affairs and culture, arts and music coverage, and events listings for New York City...
(from November 1986 to December 2005) and other publications he has been a supporter of progressive music including such Downtown
Downtown music
Downtown music is a subdivision of American music, closely related to experimental music. The scene the term describes began in 1960, when Yoko Ono—one of the Fluxus artists, at that time still seven years away from meeting John Lennon—opened her loft at 112 Chambers Street to be used...
movements as postminimalism
Postminimalism
Postminimalism is an art term coined by Robert Pincus-Witten in 1971 used in various artistic fields for work which is influenced by, or attempts to develop and go beyond, the aesthetic of minimalism...
and totalism
Totalism (music)
In music, totalism is a term for a style of art music that arose in the 1980s and 1990s as a developing response to minimalism—parallel to postminimalism, but generally among a slightly younger generation, born in the 1950s....
.

As a composer his works fall generally into three categories:

Of particular importance in most of his music is the concept of repeating loops, ostinatos, or isorhythm
Isorhythm
Isorhythm is a musical technique that arranges a fixed pattern of pitches with a repeating rhythmic pattern.-Detail:...
s of different lengths going out of phase with each other; the idea leads to simultaneous layers of different, mutually prime tempo relationships in his Disklavier and electronic works, and is used in a less obvious structural way in his live-ensemble music. This concept can be traced back to suggestions in the rhythmic chapter of Henry Cowell
Henry Cowell
Henry Cowell was an American composer, music theorist, pianist, teacher, publisher, and impresario. His contribution to the world of music was summed up by Virgil Thomson, writing in the early 1950s:...
's book New Musical Resources, but is also related here to inspirations from astrology
Astrology
Astrology consists of a number of belief systems which hold that there is a relationship between astronomical phenomena and events in the human world...
, into which Gann was drawn by the writings of composer/astrologer Dane Rudhyar
Dane Rudhyar
Dane Rudhyar , born Daniel Chennevière, was an author, modernist composer and humanistic astrologer. He was the pioneer of modern transpersonal astrology.-Biography:...
.

Another thread in his work has been the influence, both rhythmic and melodic, of Native American music
Native American music
American Indian music is the music that is used, created or performed by Native North Americans, specifically traditional tribal music. In addition to the traditional music of the Native American groups, there now exist pan-tribal and inter-tribal genres as well as distinct Indian subgenres of...
, particularly that of the Hopi
Hopi
The Hopi are a federally recognized tribe of indigenous Native American people, who primarily live on the Hopi Reservation in northeastern Arizona. The Hopi area according to the 2000 census has a population of 6,946 people. Their Hopi language is one of the 30 of the Uto-Aztecan language...
, Zuni, and other Southwest Pueblo
Pueblo
Pueblo is a term used to describe modern communities of Native Americans in the Southwestern United States of America. The first Spanish explorers of the Southwest used this term to describe the communities housed in apartment-like structures built of stone, adobe mud, and other local material...
tribes. Gann first learned about this music from reading a musical analysis of a Zuni buffalo dance published in the book Sonic Design by Robert Cogan and Pozzi Escot. According to Gann, "It was going back and forth between different tempos: triplet, quarter, dotted quarter, and quarters. So I started collecting American Indian music. [It] solved a rhythmic problem for me, because I was really interested in music with different tempos."

Starting in 1984 with his political piece The Black Hills Belong to the Sioux, Gann adopted a method of switching between different tempos (usually between quarter-notes, dotted eighths, triplet quarters, and other values) as a more performable alternative to the simultaneous layers at contrasting tempos that he had sought earlier under Charles Ives's influence.Ironically, other composers had arrived at a similar technique via other routes, coalescing into a New York style of the 1980s and '90s called Totalism.

A common Gann strategy is to set a rhythmic process in motion and use harmony (mostly triadic or seventh-chord-based, whether microtonal or conventional) to inflect the form and focus the listener's attention. Gann's microtonal music proceeds according to Harry Partch
Harry Partch
Harry Partch was an American composer and instrument creator. He was one of the first twentieth-century composers to work extensively and systematically with microtonal scales, writing much of his music for custom-made instruments that he built himself, tuned in 11-limit just intonation.-Early...
's technique of tonality flux
Tonality flux
Tonality flux is Harry Partch's term for the kinds of subtle harmonic changes that can occur in a microtonal context from notes moving from one chord to another by tiny increments of voice leading. For instance, within a major third G-B, there can be a minor third G 1/4-tone sharp to B 1/4-tone...
, linking chords through tiny (less than a half-step) increments of voice-leading. In 2000, Gann studied jazz
Jazz
Jazz is a musical style that originated at the beginning of the 20th century in African American communities in the Southern United States. It was born out of a mix of African and European music traditions. From its early development until the present, jazz has incorporated music from 19th and 20th...
harmony with John Esposito
John Esposito (pianist)
John Esposito is an American jazz pianist of advanced bebop tendencies. Known as a composer for his own groups and a versatile sideman capable of all styles from stride piano to free improvisation, he is a pianist highly influenced by modernism , and capable of playing off of several rhythmic and...
, and began using bebop
Bebop
Bebop differed drastically from the straightforward compositions of the swing era, and was instead characterized by fast tempos, asymmetrical phrasing, intricate melodies, and rhythm sections that expanded on their role as tempo-keepers...
harmony as a basis for his non-microtonal music, even in contexts not reminiscent of jazz.

Raised in a musical family, Gann began composing at the age of 13. After graduating in 1973 from Dallas
Dallas Independent School District
The Dallas Independent School District is a school district based in Dallas, Texas . Dallas ISD, which operates schools in much of Dallas County, is the second largest school district in Texas and the twelfth largest in the United States.In 2009, the school district was rated "academically...
' Skyline High School
Skyline High School (Dallas)
Skyline High School is a secondary school in the Pleasant Grove area of Dallas, Texas. It was the first high school in the United States to offer a magnet school curriculum....
, he attended Oberlin Conservatory of Music
Oberlin Conservatory of Music
The Oberlin Conservatory of Music, located on the campus of Oberlin College in Oberlin, Ohio, was founded in 1865 and is the oldest continuously operating conservatory in the United States. Students of Oberlin Conservatory enter a very broad network within the music world, as the school's alumni...
where he obtained a B.Mus. in 1977 and Northwestern University
Northwestern University
Northwestern University is a private research university in Evanston and Chicago, Illinois, USA. Northwestern has eleven undergraduate, graduate, and professional schools offering 124 undergraduate degrees and 145 graduate and professional degrees....
, where he received his M.Mus. and D.Mus. in 1981 and 1983, respectively. At Oberlin he studied composition with Randolph Coleman
Randolph Coleman
Randolph 'Randy' Coleman is an American composer and educator. He was the first chairman of the national council of the American Society of University Composers , a position later held by Frank Zappa.-Biography:...
and also studied Renaissance
Renaissance music
Renaissance music is European music written during the Renaissance. Defining the beginning of the musical era is difficult, given that its defining characteristics were adopted only gradually; musicologists have placed its beginnings from as early as 1300 to as late as the 1470s.Literally meaning...
counterpoint
Counterpoint
In music, counterpoint is the relationship between two or more voices that are independent in contour and rhythm and are harmonically interdependent . It has been most commonly identified in classical music, developing strongly during the Renaissance and in much of the common practice period,...
with Greg Proctor at the University of Texas at Austin. He studied composition primarily with Ben Johnston (1984–86) and Peter Gena (1977–81), and briefly with Morton Feldman
Morton Feldman
Morton Feldman was an American composer, born in New York City.A major figure in 20th century music, Feldman was a pioneer of indeterminate music, a development associated with the experimental New York School of composers also including John Cage, Christian Wolff, and Earle Brown...
(1975). In 1981-82 he worked for the New Music America festival, and afterward gained experience as a journalist at the Chicago Reader, Tribune
Chicago Tribune
The Chicago Tribune is a major daily newspaper based in Chicago, Illinois, and the flagship publication of the Tribune Company. Formerly self-styled as the "World's Greatest Newspaper" , it remains the most read daily newspaper of the Chicago metropolitan area and the Great Lakes region and is...
, Sun-Times
Chicago Sun-Times
The Chicago Sun-Times is an American daily newspaper published in Chicago, Illinois. It is the flagship paper of the Sun-Times Media Group.-History:The Chicago Sun-Times is the oldest continuously published daily newspaper in the city...
, and New York Times. He was hired at The Village Voice in 1986, where he wrote a weekly column until 1997 and then less frequently until December, 2005. He taught part-time at Bucknell University
Bucknell University
Bucknell University is a private liberal arts university located alongside the West Branch Susquehanna River in the rolling countryside of Central Pennsylvania in the town of Lewisburg, 30 miles southeast of Williamsport and 60 miles north of Harrisburg. The university consists of the College of...
from 1989 to 1997. Since 1997 he has taught music theory, history, and composition at Bard College
Bard College
Bard College, founded in 1860 as "St. Stephen's College", is a small four-year liberal arts college located in Annandale-on-Hudson, New York.-Location:...
in upstate New York
Upstate New York
Upstate New York is the region of the U.S. state of New York that is located north of the core of the New York metropolitan area.-Definition:There is no clear or official boundary between Upstate New York and Downstate New York...
.