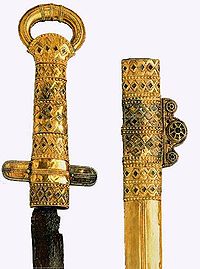 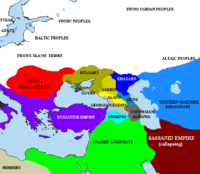 The name Kubrat is first mentioned by Patriarch Nikephoros I of Constantinople
Patriarch Nikephoros I of Constantinople
St. Nikephoros I or Nicephorus I , was a Christian Byzantine writer and Ecumenical Patriarch of Constantinople from April 12, 806, to March 13, 815....
, in his Short History in the 9th century. However the word first appears in the Orkhon inscriptions
Orkhon inscriptions
"Orkhon inscription" may refer to:*two monuments in the Orkhon valley, see Khöshöö Tsaidam Monuments*inscriptions in the Old Turkic "Orkhon alphabet" in general, see Old Turkic epigraphy...
of the Gökturks
Göktürks
The Göktürks or Kök Türks, were a nomadic confederation of peoples in medieval Inner Asia. Known in Chinese sources as 突厥 , the Göktürks under the leadership of Bumin Qaghan The Göktürks or Kök Türks, (Old Turkic: Türük or Kök Türük or Türük; Celestial Turks) were a nomadic confederation of...
and literally means "founding". According to the nomadic tradition almost every king was given a title which summarized his accomplishments or stressed a major one, such as Ilterish Khagan (İl "state", Terish "organized", Khagan
Khagan
Khagan or qagan , alternatively spelled kagan, khaghan, qaghan, or chagan, is a title of imperial rank in the Mongolian and Turkic languages equal to the status of emperor and someone who rules a khaganate...
or Khan
Khan (title)
Khan is an originally Altaic and subsequently Central Asian title for a sovereign or military ruler, widely used by medieval nomadic Turko-Mongol tribes living to the north of China. 'Khan' is also seen as a title in the Xianbei confederation for their chief between 283 and 289...
"king" ) for the king who united the Gökturks for a second time. The title for the founding king would be Kubrat Khagan, which would mean "The Founding King", which he was.

In the Nominalia of the Bulgarian khans
Nominalia of the Bulgarian khans
The Nominalia of the Bulgarian khans is a short manuscript containing the names of some early Bulgar rulers, their clans, the year of their ascending to the throne according to the cyclic Bulgar calendar and the length of their rule, including the times of joint rule and civil war...
Kubrat is mentioned as Kurt of the Dulo clan
Dulo clan
The Dulo Clan or the House of Dulo was the name of the ruling dynasty of the early Bulgars.This was the clan of Kubrat who founded Old Great Bulgaria, and his sons Batbayan, Kuber and Asparuh, the latter of which founded Danube Bulgaria....
. A later legend would describe him as a descendant of Attila the Hun
Attila the Hun
Attila , more frequently referred to as Attila the Hun, was the ruler of the Huns from 434 until his death in 453. He was leader of the Hunnic Empire, which stretched from the Ural River to the Rhine River and from the Danube River to the Baltic Sea. During his reign he was one of the most feared...
. Some historians conclude that his maternal line was of the Ermy clan, because his maternal uncle Organa
Organa
Organa was Kubrat's maternal uncle of the Ermy clan. According to John of Nikiu, he was regent over the tribe of the Onogur Bulgars from 617 to 630 in place of his nephew, Kubrat, for the time Kubrat was growing up as a hostage in the Byzantine Empire and there is information that Organa...
was possibly of that clan.. In hungarian history, the Great Prince of the onogurs
Onogurs
The Onogurs, also known as Utigurs, were a horde of equestrian nomads in the North Eurasian steppe east of the Don River during the 5th to 8th centuries. The Onogurs crossed the Volga and entered into Europe around the year 460 within the larger context of the Great Migrations and the Turkic...
Árpád
Árpád
Árpád was the second Grand Prince of the Hungarians . Under his rule the Hungarian people settled in the Carpathian basin. The dynasty descending from him ruled the Hungarian tribes and later the Kingdom of Hungary until 1301...
Almos , was from the Kubrat streaming, founding the Hungarian empire in Europe.

Kubrat spent time at the Byzantine
Byzantine
Byzantine usually refers to the Roman Empire during the Middle Ages.Byzantine may also refer to:* A citizen of the Byzantine Empire, or native Greek during the Middle Ages...
court, either as a hostage or for protection from the dynastic war within the Turkic Khaganate
Göktürks
The Göktürks or Kök Türks, were a nomadic confederation of peoples in medieval Inner Asia. Known in Chinese sources as 突厥 , the Göktürks under the leadership of Bumin Qaghan The Göktürks or Kök Türks, (Old Turkic: Türük or Kök Türük or Türük; Celestial Turks) were a nomadic confederation of...
. As the 7th-century Byzantine historian John of Nikiu
John of Nikiû
John of Nikiû was an Egyptian Coptic bishop of Nikiû/Pashati in the Nile Delta and appointed general administrator of the monasteries of Upper Egypt in 696...
narrates:
Whether he was a child or an adult during his time in Constantinople is unclear, as the year of his birth is unknown. The exact time of this event is also unknown but probably coincided with the reign of Emperor Heraclius
Heraclius
Heraclius was Byzantine Emperor from 610 to 641.He was responsible for introducing Greek as the empire's official language. His rise to power began in 608, when he and his father, Heraclius the Elder, the exarch of Africa, successfully led a revolt against the unpopular usurper Phocas.Heraclius'...
(r. 610–641). If the above text really applies to Kubrat then it becomes clear that during his stay in Constantinople
Constantinople
Constantinople was the capital of the Roman, Eastern Roman, Byzantine, Latin, and Ottoman Empires. Throughout most of the Middle Ages, Constantinople was Europe's largest and wealthiest city.-Names:...
he was educated and baptized
Baptism
In Christianity, baptism is for the majority the rite of admission , almost invariably with the use of water, into the Christian Church generally and also membership of a particular church tradition...
. Probably at the same time he was given the title patrikios, which was inscribed on his ring.

According to legend the 3rd, 4th, and 5th of the many sons of Kubrat with their hordes originally inhabited the Avar Khaganate
Eurasian Avars
The Eurasian Avars or Ancient Avars were a highly organized nomadic confederacy of mixed origins. They were ruled by a khagan, who was surrounded by a tight-knit entourage of nomad warriors, an organization characteristic of Turko-Mongol groups...
.

The Pereshchepina hoard was discovered in 1912 by Ukrainian peasants in the vicinity of Poltava
Poltava
Poltava is a city in located on the Vorskla River in central Ukraine. It is the administrative center of the Poltava Oblast , as well as the surrounding Poltava Raion of the oblast. Poltava's estimated population is 298,652 ....
, yielding, gold and silver objects of total weight of 75 kg, including a ring which eventually allowed identification of the grave as that belonging to Khan Kubrat. The ring was inscribed in Greek "Chouvr(á)tou patr(i)k(íou)", indicating the dignity of patrikios that he had achieved in the Byzantine world.