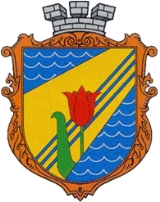 Encyclopedia
Krasnoperekopsk is a city in Crimea
Crimea
Crimea , or the Autonomous Republic of Crimea , is a sub-national unit, an autonomous republic, of Ukraine. It is located on the northern coast of the Black Sea, occupying a peninsula of the same name...
, Ukraine
Ukraine
Ukraine is a country in Eastern Europe. It has an area of 603,628 km², making it the second largest contiguous country on the European continent, after Russia...
which is located on the southern part of the Perekop Isthmus, on the shore of the Stare
Stare
Stare may refer to:*Staring, a prolonged gaze or fixed look*Staré, a village and municipality in Michalovce District in the Kosice Region of eastern Slovakia*Stare, a verb in Latin and Italian which means "to stand"...
lake, and about 124 kilometres (77.1 mi) from the Crimean capital, Simferopol
Simferopol
-Russian Empire and Civil War:The city was renamed Simferopol in 1784 after the annexation of the Crimean Khanate to the Russian Empire by Catherine II of Russia. The name Simferopol is derived from the Greek, Συμφερόπολις , translated as "the city of usefulness." In 1802, Simferopol became the...
. It lies on the Dzhankoy
Dzhankoy
Dzhankoy is a city in the north of Crimea, Ukraine, and the capital of Dzhankoy raion. It is located about from the Crimean capital, Simferopol. Two railroad lines, Kharkiv-Sevastopol and Armyansk-Kerch, cross Dzhankoy. In 1926, Dzhankoy was granted city status.Dzhankoy is a great transportation...
-Kherson
Kherson
Kherson is a city in southern Ukraine. It is the administrative center of the Kherson Oblast , and is designated as its own separate raion within the oblast. Kherson is an important port on the Black Sea and Dnieper River, and the home of a major ship-building industry...
railroad line (one of the two railroad lines connecting the Crimea and the rest of the continent).

The city was founded in 1932 as an industrial settlement for a Bromine
Bromine
Bromine ") is a chemical element with the symbol Br, an atomic number of 35, and an atomic mass of 79.904. It is in the halogen element group. The element was isolated independently by two chemists, Carl Jacob Löwig and Antoine Jerome Balard, in 1825–1826...
factory located near the lake Stare. In 1936 the settlement was renamed into Krasno-Prekopsk and later simply Krasnoperekopsk (1964). In 1966, Krasnoperekopsk received the status of a city
City status
City status is the national recognition of an area as a city. Specifically, "city status" may refer to:*City rights in the Low Countries*City status in Ireland*City status in the United Kingdom*City status in the United States of America...
.