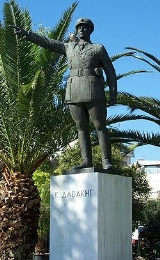 Encyclopedia
Konstantinos Davakis was a Greek military officer in World War II
World War II
World War II, or the Second World War , was a global conflict lasting from 1939 to 1945, involving most of the world's nations—including all of the great powers—eventually forming two opposing military alliances: the Allies and the Axis...
. He organized the Greek defensive lines during the Battle of Pindus
Battle of Pindus
The Battle of Pindus took place in the Pindus Mountains in Epirus and West Macedonia, Greece, in the autumn of 1940, between October 28 – November 13. The battle was fought between the Greek and the Italian armies during the first stages of the Greco-Italian War...
that lead to Italian defeat in the first stage of the Greco-Italian War
Greco-Italian War
The Greco-Italian War was a conflict between Italy and Greece which lasted from 28 October 1940 to 23 April 1941. It marked the beginning of the Balkans Campaign of World War II...
of 1940.

He was born in the village of Kechrianika, Laconia
Laconia
Laconia , also known as Lacedaemonia, is one of the regional units of Greece. It is part of the region of Peloponnese. It is situated in the southeastern part of the Peloponnese peninsula. Its administrative capital is Sparti...
prefecture in 1897. After graduating military school, he saw action in World War I
World War I
World War I , which was predominantly called the World War or the Great War from its occurrence until 1939, and the First World War or World War I thereafter, was a major war centred in Europe that began on 28 July 1914 and lasted until 11 November 1918...
and the Greco-Turkish War (1919-1922)
Greco-Turkish War (1919-1922)
The Greco–Turkish War of 1919–1922, known as the Western Front of the Turkish War of Independence in Turkey and the Asia Minor Campaign or the Asia Minor Catastrophe in Greece, was a series of military events occurring during the partitioning of the Ottoman Empire after World War I between May...
.

Davakis was a colonel when Italy attacked Greece
Greco-Italian War
The Greco-Italian War was a conflict between Italy and Greece which lasted from 28 October 1940 to 23 April 1941. It marked the beginning of the Balkans Campaign of World War II...
on 28 October 1940. As commander of the Pindus
Pindus
The Pindus mountain range is located in northern Greece and southern Albania. It is roughly 160 km long, with a maximum elevation of 2637 m . Because it runs along the border of Thessaly and Epirus, the Pindus range is often called the "spine of Greece"...
detachment (Απόσπασμα Πίνδου), he successfully repelled the Italian Julia Alpine Division
3 Alpine Division Julia
The 3rd Alpine Division Julia was a World War II light Infantry division of the Italian Army, specializing in Mountain Combat. The Alpini that formed the divisions are a highly decorated and elite mountain corps of the Italian Army comprising both infantry and artillery units...
's attack in late October 1940 but was seriously injured in November of the same year, when he counter-attacked, nearly destroying it.

Davakis' detachment, composed of two infantry battalions of the 51st Infantry Regiment, one cavalry troop and one artillery battery, was the first Greek unit that received the "blow" of the Italian invasion. Davakis' forces were overstretched, covering a 30 km front on mountainous terrain. His unit resisted the Julia Division's advance for two days, by which time sufficient reinforcements could be brought up to contain and defeat
Battle of Pindus
The Battle of Pindus took place in the Pindus Mountains in Epirus and West Macedonia, Greece, in the autumn of 1940, between October 28 – November 13. The battle was fought between the Greek and the Italian armies during the first stages of the Greco-Italian War...
the Italians.

On 2 November 1940, near the village of Samarina, while directing his unit, Davakis was hit in the chest, suffering serious lung injury and lapsing into a coma. Although he regained consciousness two days later, he remained hospitalized. In December 1942, he was arrested by the Italian occupation authorities, along with other Greek officers, suspected of participation in the Greek Resistance
Greek Resistance
The Greek Resistance is the blanket term for a number of armed and unarmed groups from across the political spectrum that resisted the Axis Occupation of Greece in the period 1941–1944, during World War II.-Origins:...
. The officers were to be shipped to POW camps in Italy on the Citta di Genoa liner, but the ship was torpedoed and sank off southern Albania in January 1943. Davakis' body was recognized by local Greeks and buried at Vlorë
Vlorë
Vlorë is one of the biggest towns and the second largest port city of Albania, after Durrës, with a population of about 94,000 . It is the city where the Albanian Declaration of Independence was proclaimed on November 28, 1912...
. His bones were transferred to Athens after the war.