Encyclopedia
was a statesman and diplomat in Meiji period
Meiji period
The , also known as the Meiji era, is a Japanese era which extended from September 1868 through July 1912. This period represents the first half of the Empire of Japan.- Meiji Restoration and the emperor :...
Japan.

Komura was born to a lower-ranking samurai
Samurai
is the term for the military nobility of pre-industrial Japan. According to translator William Scott Wilson: "In Chinese, the character 侍 was originally a verb meaning to wait upon or accompany a person in the upper ranks of society, and this is also true of the original term in Japanese, saburau...
family in service of the Obi clan at Nichinan
Nichinan, Miyazaki
is a city in Miyazaki Prefecture, Japan. The city was founded on January 1, 1950. As of November 1, 2009, the city has an estimated population of 57,866 and a population density of 108 persons per km². The city's total area is 536.12 km²....
, Hyuga province
Hyuga Province
was an old province of Japan on the east coast of Kyūshū, corresponding to the modern Miyazaki Prefecture. It was sometimes called or . Hyūga bordered on Bungo, Higo, Ōsumi, and Satsuma Province.The ancient capital was near Saito.-Historical record:...
(present-day Miyazaki prefecture
Miyazaki Prefecture
is a prefecture of Japan located on the island of Kyushu. The capital is the city of Miyazaki.- History :Historically, after the Meiji Restoration, Hyūga Province was renamed Miyazaki Prefecture....
). He attended the Daigaku Nankō (the predecessor of Tokyo Imperial University). In 1875, he was selected by the Ministry of Education as one of the first students to study abroad under a government scholarship. While at Harvard University
Harvard University
Harvard University is a private Ivy League university located in Cambridge, Massachusetts, United States, established in 1636 by the Massachusetts legislature. Harvard is the oldest institution of higher learning in the United States and the first corporation chartered in the country...
, Komura shared lodgings with fellow Japanese student Kaneko Kentarō
Kaneko Kentaro
was a statesman and diplomat in Meiji period Japan.- Early life :Kaneko was born into a samurai family of Fukuoka Domain . At the age of 9, he began his studies at Shuyukan...
. In due course, Komura graduated from Harvard Law School
Harvard Law School
Harvard Law School is one of the professional graduate schools of Harvard University. Located in Cambridge, Massachusetts, it is the oldest continually-operating law school in the United States and is home to the largest academic law library in the world. The school is routinely ranked by the U.S...
in 1878.

In 1893, Komura was chargé d'affaires
Chargé d'affaires
In diplomacy, chargé d’affaires , often shortened to simply chargé, is the title of two classes of diplomatic agents who head a diplomatic mission, either on a temporary basis or when no more senior diplomat has been accredited.-Chargés d’affaires:Chargés d’affaires , who were...
at the Japanese legation in Beijing
Beijing
Beijing , also known as Peking , is the capital of the People's Republic of China and one of the most populous cities in the world, with a population of 19,612,368 as of 2010. The city is the country's political, cultural, and educational center, and home to the headquarters for most of China's...
, in Qing dynasty
Qing Dynasty
The Qing Dynasty was the last dynasty of China, ruling from 1644 to 1912 with a brief, abortive restoration in 1917. It was preceded by the Ming Dynasty and followed by the Republic of China....
China. In this position, he conveyed to the Chinese government Japan's intention of dispatching troops to Korea
Korea
Korea ) is an East Asian geographic region that is currently divided into two separate sovereign states — North Korea and South Korea. Located on the Korean Peninsula, Korea is bordered by the People's Republic of China to the northwest, Russia to the northeast, and is separated from Japan to the...
under the provisions of the Treaty of Tientsin
Treaty of Tientsin
Several documents known as the "Treaty of Tien-tsin" were signed in Tianjin in June 1858, ending the first part of the Second Opium War . The Second French Empire, United Kingdom, Russian Empire, and the United States were the parties involved...
to subdue the Tonghak Rebellion
Donghak Peasant Revolution
The Donghak Peasant Revolution, also known as the Donghak Peasant Movement, was an anti-government, anti-feudal and anti-foreign uprising in 1894 in the southern Korea which was the catalyst for the First Sino-Japanese War....
– actions which led to the First Sino-Japanese War
First Sino-Japanese War
The First Sino-Japanese War was fought between Qing Dynasty China and Meiji Japan, primarily over control of Korea...
. During the war, Komura was appointed as civilian administrator for territories Japan had captured in Manchuria
Manchuria
Manchuria is a historical name given to a large geographic region in northeast Asia. Depending on the definition of its extent, Manchuria usually falls entirely within the People's Republic of China, or is sometimes divided between China and Russia. The region is commonly referred to as Northeast...
. He was also a key figure in the negotiations to end the war, culminating in the Treaty of Shimonoseki
Treaty of Shimonoseki
The Treaty of Shimonoseki , known as the Treaty of Maguan in China, was signed at the Shunpanrō hall on April 17, 1895, between the Empire of Japan and Qing Empire of China, ending the First Sino-Japanese War. The peace conference took place from March 20 to April 17, 1895...
, which he helped draft.

Following the assassination of Queen Min
Empress Myeongseong
Empress Myeongseong , also known as Queen Min, was the first official wife of King Gojong, the twenty-sixth king of the Joseon dynasty of Korea...
of Korea, Komura was dispatched to replace Miura Gorō as Japanese minister to Korea. In his position as resident minister in Korea, he negotiated the Komura-Weber Memorandum in May 1896 with his Russian counterpart Karl Ivanovich Weber
Karl Ivanovich Weber
Karl Ivanovich Weber was a diplomat of the Russian Empire and a personal friend to King Gojong of Korea's Joseon Dynasty...
, allowing joint interference into Korean internal affairs by Japan and Russia.

In September 1901, Komura became Minister for Foreign Affairs
Minister for Foreign Affairs (Japan)
The of Japan is the Cabinet member responsible for Japanese foreign policy and the chief executive of the Ministry of Foreign Affairs.Since the end of the American occupation of Japan, the position has been one of the most powerful in the Cabinet, as Japan's economic interests have long relied on...
under the first Katsura
Katsura Taro
Prince , was a general in the Imperial Japanese Army, politician and three-time Prime Minister of Japan.-Early life:Katsura was born into a samurai family from Hagi, Chōshū Domain...
administration, and signed the Boxer Protocol
Boxer Protocol
The Boxer Protocol was signed on September 7, 1901 between the Qing Empire of China and the Eight-Nation Alliance that had provided military forces plus Belgium, Spain and the Netherlands after China's defeat in the intervention to put down the Boxer Rebellion at the hands of the...
on behalf of Japan. He also helped conclude the Anglo-Japanese Alliance
Anglo-Japanese Alliance
The first was signed in London at what is now the Lansdowne Club, on January 30, 1902, by Lord Lansdowne and Hayashi Tadasu . A diplomatic milestone for its ending of Britain's splendid isolation, the alliance was renewed and extended in scope twice, in 1905 and 1911, before its demise in 1921...
in 1902. His tenure as Foreign Minister was marked with increasing tension between Japan and Russia over Korea and Manchuria, cumulating in the Russo-Japanese War
Russo-Japanese War
The Russo-Japanese War was "the first great war of the 20th century." It grew out of rival imperial ambitions of the Russian Empire and Japanese Empire over Manchuria and Korea...
of 1904-1905. 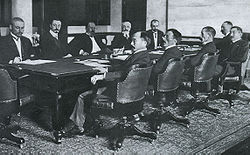 For these services, he was elevated to the title of hakushaku (count
Count
A count or countess is an aristocratic nobleman in European countries. The word count came into English from the French comte, itself from Latin comes—in its accusative comitem—meaning "companion", and later "companion of the emperor, delegate of the emperor". The adjective form of the word is...
) under the kazoku
Kazoku
The was the hereditary peerage of the Empire of Japan that existed between 1869 and 1947.-Origins:Following the Meiji Restoration of 1868, the ancient court nobility of Kyoto regained some of its lost status...
peerage system, and was appointed to become a member of the Privy Council
Privy Council (Japan)
was an advisory council to the Emperor of Japan that operated from 1888 to 1947.-Functions:Modeled in part upon the Privy Council of the United Kingdom, this body advised the throne on matters of grave importance including:...
.

His grave is at Aoyama Cemetery
Aoyama Cemetery
is a cemetery in Minato, Tokyo, Japan, managed by the Tokyo Metropolitan Government. The cemetery is also famous for its cherry blossoms, and at the season of hanami, many people visit.-History:...
in Tokyo.