Encyclopedia
Kombu or konbu also called dashima ( dasima) or haidai , is edible kelp
Kelp
Kelps are large seaweeds belonging to the brown algae in the order Laminariales. There are about 30 different genera....
from the family Laminariaceae
Laminariaceae
Laminariaceae are a family of seaweeds, classified as brown algae. The table indicates the genera within this family. The family includes the largest known seaweeds: Nereocystis and Macrocystis....
widely eaten in East Asia
East Asia
East Asia or Eastern Asia is a subregion of Asia that can be defined in either geographical or cultural terms...
.

Most kombu is from the species Saccharina japonica
Saccharina japonica
Saccharina japonica is a marine species of Phaeophyceae , a type of kelp or seaweed, that is extensively cultivated in China, Japan and Korea....
(Laminaria japonica), extensively cultivated on ropes in the seas of Japan and Korea. Over 90 percent of Japanese kombu is cultivated, mostly in Hokkaidō
Hokkaido
, formerly known as Ezo, Yezo, Yeso, or Yesso, is Japan's second largest island; it is also the largest and northernmost of Japan's 47 prefectural-level subdivisions. The Tsugaru Strait separates Hokkaido from Honshu, although the two islands are connected by the underwater railway Seikan Tunnel...
, but also as far south as the Seto Inland Sea.

The earliest written record of kombu appeared in Shoku Nihongi
Shoku Nihongi
The is an imperially commissioned Japanese history text. Completed in 797, it is the second of the Six National Histories, coming directly after the Nihon Shoki and followed by Nihon Kōki. Fujiwara no Tsugutada and Sugano no Mamichi served as the primary editors...
in 797
797
Year 797 was a common year starting on Sunday of the Julian calendar. The denomination 797 for this year has been used since the early medieval period, when the Anno Domini calendar era became the prevalent method in Europe for naming years.- Byzantine Empire :* July 17 – Irene of Athens...
as a gift and tax from the Tōhoku Region
Tohoku region
The is a geographical area of Japan. The region occupies the northeastern portion of Honshu, the largest island of Japan. The region consists of six prefectures : Akita, Aomori, Fukushima, Iwate, Miyagi and Yamagata....
. Its use is believed to have begun much earlier, probably dating back to the Jōmon period, but because it easily decomposes, no archaeological evidence can be found. During the Muromachi period
Muromachi period
The is a division of Japanese history running from approximately 1336 to 1573. The period marks the governance of the Muromachi or Ashikaga shogunate, which was officially established in 1338 by the first Muromachi shogun, Ashikaga Takauji, two years after the brief Kemmu restoration of imperial...
a newly developed drying technique allowed kombu to be stored for more than a few days, and kombu became an important export from the Tohoku area. By the Edo period
Edo period
The , or , is a division of Japanese history which was ruled by the shoguns of the Tokugawa family, running from 1603 to 1868. The political entity of this period was the Tokugawa shogunate....
, as Hokkaidō was colonized and shipment routes were organized, the use of kombu became widespread throughout Japan. Traditional Okinawan cuisine
Okinawan cuisine
Okinawan cuisine is the cuisine of the Japanese island of Okinawa. Due to difference in culture, climate, vegetables and other ingredients between Okinawa and mainland Japan, Okinawan cuisine is very different from Japanese cuisine.-History:...
relies heavily on kombu as a part of the diet; this practice began in the Edo period. Okinawa uses more kombu per household than any other prefecture. In the 20th century, a way to cultivate kombu was discovered and kombu became cheap and readily available.

Since the 1960s, dried kombu has been exported from Japan to many countries. It was available initially at Asian, and Japanese in particular, food shops and restaurants, and has later been sold by supermarkets, health-food stores, and other non-specialised suppliers. 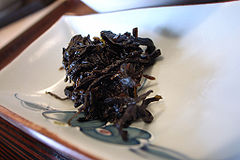 Kombu is used extensively in Japanese cuisine
Japanese cuisine
Japanese cuisine has developed over the centuries as a result of many political and social changes throughout Japan. The cuisine eventually changed with the advent of the Medieval age which ushered in a shedding of elitism with the age of shogun rule...
s as one of the three main ingredients needed to make dashi
Dashi
Dashi is a class of soup and cooking stock, considered fundamental to Japanese cooking. In 1980, Shizuo Tsuji wrote: "Many substitutes for dashi are possible, but without dashi, dishes are merely à la japonaise and lack the authentic flavor." Dashi forms the base for miso soup, clear broth, noodle...
, a soup stock. Kombu is sold dried ('dashi kombu') or pickled in vinegar ('su kombu') or as a dried shred ('Oboro kombu' or 'Shiraga kombu'). It may also be eaten fresh as sashimi
Sashimi
Sashimi is a Japanese delicacy. It consists of very fresh raw meat, most commonly fish, sliced into thin pieces.-Origin:The word sashimi means "pierced body", i.e...
. Making kombu dashi is simple though kombu dashi powder may also be used. A strip of dried kombu in cold water, then heated to near-boiling, is the very first step of making dashi and the softened kombu is commonly eaten after cooking. It can also be sliced and used to make tsukudani
Tsukudani
is small seafood, meat or seaweed that has been simmered in soy sauce and mirin. High osmotic pressure preserves the ingredients. Its name originates from Tsukudajima, the island where it was first made in the Edo period. Many kinds of tsukudani are sold...
, a dish that is simmered in soy sauce and mirin
Mirin
is an essential condiment used in Japanese cuisine, consisting of 40%–50% sugar. It is a kind of rice wine similar to sake, but with a lower alcohol content—14% instead of 20%. There are three general types. The first is hon mirin , which contains alcohol. The second is shio mirin, which contains...
.

Kombu may be pickled with sweet and sour flavoring and is cut into small strips 5 or 6 centimeters long and 2 centimeters wide. These are often eaten as a snack with green tea
Green tea
Green tea is made solely from the leaves of Camellia sinensis that have undergone minimal oxidation during processing. Green tea originates from China and has become associated with many cultures throughout Asia. It has recently become more widespread in the West, where black tea is traditionally...
.

It is often included when cooking beans, putatively to add nutrients and improve their digestibility.

Kombucha 昆布茶 "seaweed tea" is a beverage brewed from dried and powdered kombu. This is sometimes confused with the unrelated English word kombucha
Kombucha
Kombucha is an effervescent tea-based beverage that is often drunk for its anecdotal health benefits or medicinal purposes. Kombucha is available commercially and can be made at home by fermenting tea using a visible, solid mass of yeast and bacteria which forms the kombucha culture, often referred...
, a neologism for the fermented and sweetened tea from Russia
Russia
Russia or , officially known as both Russia and the Russian Federation , is a country in northern Eurasia. It is a federal semi-presidential republic, comprising 83 federal subjects...
, which is called kōcha kinoko (紅茶キノコ) in Japan.

Kombu is also used to prepare a seasoning for rice that is going to be made into sushi
Sushi
is a Japanese food consisting of cooked vinegared rice combined with other ingredients . Neta and forms of sushi presentation vary, but the ingredient which all sushi have in common is shari...
.

Kombu is a good source of glutamic acid
Glutamic acid
Glutamic acid is one of the 20 proteinogenic amino acids, and its codons are GAA and GAG. It is a non-essential amino acid. The carboxylate anions and salts of glutamic acid are known as glutamates...
, an amino acid responsible for umami
Umami
Umami , popularly referred to as savoriness, is one of the five basic tastes together with sweet, sour, bitter, and salty.-Etymology:Umami is a loanword from the Japanese meaning "pleasant savory taste". This particular writing was chosen by Professor Kikunae Ikeda from umai "delicious" and mi ...
, the Japanese word used for one of the five basic taste
Taste
Taste is one of the traditional five senses. It refers to the ability to detect the flavor of substances such as food, certain minerals, and poisons, etc....
s in addition to salty, sweet, sour, and bitter, identified in 1908. Several foodstuffs in addition to kombu provide glutamic acid or glutamates. Monosodium glutamate
Monosodium glutamate
Monosodium glutamate, also known as sodium glutamate or MSG, is the sodium salt of glutamic acid, one of the most abundant naturally occurring non-essential amino acids....
(MSG) is often used as a food additive and flavor enhancer.

Kombu contains iodine
Iodine
Iodine is a chemical element with the symbol I and atomic number 53. The name is pronounced , , or . The name is from the , meaning violet or purple, due to the color of elemental iodine vapor....
, a mineral that is essential for normal growth and development. However, the high iodine content of kombu has been blamed for thyroid problems after drinking large amounts of soy milk in which kombu was an additive.