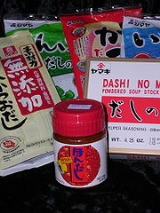 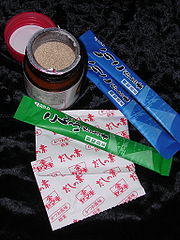 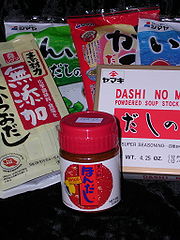 Dashi is a class of soup and cooking stock, considered fundamental to Japanese cooking
Japanese cuisine
Japanese cuisine has developed over the centuries as a result of many political and social changes throughout Japan. The cuisine eventually changed with the advent of the Medieval age which ushered in a shedding of elitism with the age of shogun rule...
. In 1980, Shizuo Tsuji wrote:

"Many substitutes for dashi are possible, but without dashi, dishes are merely à la japonaise and lack the authentic flavor."

Dashi forms the base for miso soup
Miso soup
is a traditional Japanese soup consisting of a stock called "dashi" into which is mixed softened miso paste. Many ingredients are added depending on regional and seasonal recipes, and personal preference.-Miso paste:...
, clear broth, noodle
Noodle
The noodle is a type of food, made from any of a variety of doughs, formed into long thin ribbons, strips, curly-cues, waves, helices, pipes, tubes, strings, or other various shapes, sometimes folded. They are usually cooked in a mixture of boiling water and/or oil. Depending upon the type, noodles...
broth, and many kinds of simmering liquid.

The most common form of dashi is a simple broth
Broth
Broth is a liquid food preparation, typically consisting of either water or an already flavored stock, in which bones, meat, fish, cereal grains, or vegetables have been simmered. Broth is used as a basis for other edible liquids such as soup, gravy, or sauce. It can be eaten alone or with garnish...
or stock made by heating water containing kombu
Kombu
Kombu or konbu , also called dashima or haidai , is edible kelp from the family Laminariaceae widely eaten in East Asia....
(edible kelp
Kelp
Kelps are large seaweeds belonging to the brown algae in the order Laminariales. There are about 30 different genera....
) and kezurikatsuo (shavings of katsuobushi
Katsuobushi
is the Japanese name for dried, fermented, and smoked skipjack tuna .Shaved Katsuobushi and dried kelp - kombu - are the main ingredients of dashi, a broth that forms the basis of many soups and sauces in Japanese cuisine.Katsuobushi's distinct umami flavor comes from its high...
- preserved, fermented tuna) to near-boiling, then straining the resultant liquid.

Fresh dashi, made from dried kelp and katsuobushi, is rare today, even in Japan. Most people now use granulated or liquid instant substitutes.

Other kinds of dashi stock are made by soaking kelp, niboshi
Niboshi
Niboshi are Japanese dried baby sardines . They are one of many varieties of small dried fish used throughout Asia in snacks and as seasoning for soup stocks and other foods....
, or shiitake in water for many hours or by heating them in near-boiling water and straining the resulting broth.

In 1908, the unusual and strong flavor of kelp dashi was identified by Kikunae Ikeda
Kikunae Ikeda
was a Japanese chemist and Tokyo Imperial University professor in Chemistry who, in 1908, uncovered the chemical root behind a taste he named umami. He discovered the common component that produced the flavor of meat, seaweed and tomatoes was glutamate, which produces the sensation of umami.He also...
as umami
Umami
Umami , popularly referred to as savoriness, is one of the five basic tastes together with sweet, sour, bitter, and salty.-Etymology:Umami is a loanword from the Japanese meaning "pleasant savory taste". This particular writing was chosen by Professor Kikunae Ikeda from umai "delicious" and mi ...
, the "fifth flavor", attributed to human taste receptors responding to glutamic acid
Glutamic acid
Glutamic acid is one of the 20 proteinogenic amino acids, and its codons are GAA and GAG. It is a non-essential amino acid. The carboxylate anions and salts of glutamic acid are known as glutamates...
.
The source of this article is wikipedia, the free encyclopedia.  The text of this article is licensed under the GFDL.