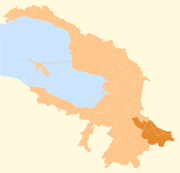 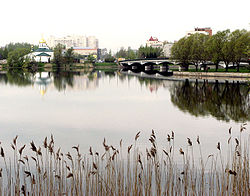 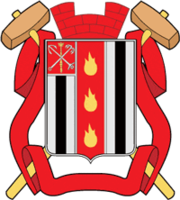 Kolpino is a municipal city in Kolpinsky District
Kolpinsky District
Kolpinsky District is an administrative and municipal district , one of the 18 in Saint Petersburg, Russia....
of the federal city
Federal cities of Russia
The Russian Federation is divided into 83 federal subjects, two of which are federal cities....
of St. Petersburg
Saint Petersburg
Saint Petersburg is a city and a federal subject of Russia located on the Neva River at the head of the Gulf of Finland on the Baltic Sea...
, Russia
Russia
Russia or , officially known as both Russia and the Russian Federation , is a country in northern Eurasia. It is a federal semi-presidential republic, comprising 83 federal subjects...
, located on the Izhora River
Izhora River
The Izhora , also known as Inger River, is a left tributary of the Neva River on its run through Ingria in northwestern Russia from Lake Ladoga to Gulf of Finland. A settlement of Ust-Izhora is situated at the confluence of Izhora and Neva, halfway between Saint Petersburg and Schlisselburg. The...
(Neva's tributary
Tributary
A tributary or affluent is a stream or river that flows into a main stem river or a lake. A tributary does not flow directly into a sea or ocean...
) 26 kilometres (16.2 mi) southeast of St. Petersburg proper. Population: 81,000 (1972); 8,076 (1897).

Kolpino was founded in 1722 and was granted town status in 1912. It used to be one of the chief ironworks
Ironworks
An ironworks or iron works is a building or site where iron is smelted and where heavy iron and/or steel products are made. The term is both singular and plural, i.e...
of the crown in Russia. Kolpino was also home to an iron
Iron
Iron is a chemical element with the symbol Fe and atomic number 26. It is a metal in the first transition series. It is the most common element forming the planet Earth as a whole, forming much of Earth's outer and inner core. It is the fourth most common element in the Earth's crust...
foundry
Foundry
A foundry is a factory that produces metal castings. Metals are cast into shapes by melting them into a liquid, pouring the metal in a mold, and removing the mold material or casting after the metal has solidified as it cools. The most common metals processed are aluminum and cast iron...
of the Russian Admiralty
Admiralty
The Admiralty was formerly the authority in the Kingdom of England, and later in the United Kingdom, responsible for the command of the Royal Navy...
. A sacred image of St. Nicholas
Saint Nicholas
Saint Nicholas , also called Nikolaos of Myra, was a historic 4th-century saint and Greek Bishop of Myra . Because of the many miracles attributed to his intercession, he is also known as Nikolaos the Wonderworker...
in the Trinity Church is visited by numerous pilgrim
Pilgrim
A pilgrim is a traveler who is on a journey to a holy place. Typically, this is a physical journeying to some place of special significance to the adherent of a particular religious belief system...
s on the 22nd of May every year.

During the construction of a new residential building, a mass grave was discovered in Kolpino. There were 888 soldiers and officers of the Red Army buried in the mass grave in that cemetery. They fell in September 1941. It is located on the street of Very Slutskoy.