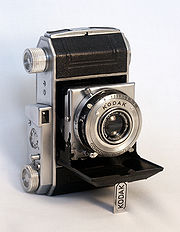 Retina was the name of a long-running series of German
Germany
Germany , officially the Federal Republic of Germany , is a federal parliamentary republic in Europe. The country consists of 16 states while the capital and largest city is Berlin. Germany covers an area of 357,021 km2 and has a largely temperate seasonal climate...
-built Kodak camera
Camera
A camera is a device that records and stores images. These images may be still photographs or moving images such as videos or movies. The term camera comes from the camera obscura , an early mechanism for projecting images...
s. Retinas were manufactured in Stuttgart
Stuttgart
Stuttgart is the capital of the state of Baden-Württemberg in southern Germany. The sixth-largest city in Germany, Stuttgart has a population of 600,038 while the metropolitan area has a population of 5.3 million ....
by Nagel Camerawerk, which Kodak had acquired in 1931, and sold under the Kodak nameplate. Retinas were noted for their compact size, quality, and low cost compared to their competitors and retain a strong following today. The original Retina, introduced in 1934, was notable for being the first camera to use the modern 135
135 film
The term 135 was introduced by Kodak in 1934 as a designation for cartridge film wide, specifically for still photography. It quickly grew in popularity, surpassing 120 film by the late 1960s to become the most popular photographic film format...
film
Photographic film
Photographic film is a sheet of plastic coated with an emulsion containing light-sensitive silver halide salts with variable crystal sizes that determine the sensitivity, contrast and resolution of the film...
cartridge. The Retina line continued through the 1960s with a variety of folding and nonfolding models, including the Retina Reflex SLR.

Kodak also sold a companion line of less-expensive Retinette
Kodak Retinette
Kodak Retinette is the name of a classic series of cameras manufactured by the Eastman Kodak company. They were introduced in 1939 as a less expensive alternative to the Kodak Retina series. The first models were of the folding type using bellows and their lenses had three elements as compared to...
cameras.

The first Retina, a compact folding camera which pioneered the 135 format, was followed by two new models in 1936. The Retina I, which was the more popular of the two, was essentially the same as the previous model. The Retina I was most commonly equipped with a 50 mm f/3.5 Schneider Kreuznach
Schneider Kreuznach
Schneider Kreuznach is the abbreviated name of the company Jos. Schneider Optische Werke GmbH, which is sometimes also simply referred to as Schneider. They are a manufacturer of industrial and photographic optics....
Retina-Xenar lens
Photographic lens
A camera lens is an optical lens or assembly of lenses used in conjunction with a camera body and mechanism to make images of objects either on photographic film or on other media capable of storing an image chemically or electronically.While in principle a simple convex lens will suffice, in...
and Compur or Compur-Rapid shutter
Shutter (photography)
In photography, a shutter is a device that allows light to pass for a determined period of time, for the purpose of exposing photographic film or a light-sensitive electronic sensor to light to capture a permanent image of a scene...
, though other lenses and shutters were available. The Retina II was a more expensive model which included a rangefinder
Rangefinder
A rangefinder is a device that measures distance from the observer to a target, for the purposes of surveying, determining focus in photography, or accurately aiming a weapon. Some devices use active methods to measure ; others measure distance using trigonometry...
.

The Retina Ia and Retina IIa of 1951 were similar to their respective predecessors but with the addition of flash
Flash (photography)
A flash is a device used in photography producing a flash of artificial light at a color temperature of about 5500 K to help illuminate a scene. A major purpose of a flash is to illuminate a dark scene. Other uses are capturing quickly moving objects or changing the quality of light...
synchronization and wind levers rather than knobs. The sleeker Retina Ib and Retina IIc came out in 1954 along with the Retina IIIc, which was basically a Retina IIc with a selenium
Selenium
Selenium is a chemical element with atomic number 34, chemical symbol Se, and an atomic mass of 78.96. It is a nonmetal, whose properties are intermediate between those of adjacent chalcogen elements sulfur and tellurium...
light meter
Light meter
A light meter is a device used to measure the amount of light. In photography, a light meter is often used to determine the proper exposure for a photograph...
. The fifth and final generation of folding Retinas, which included the Retina IIC, Retina IIIC, and meter-equipped Retina IB, was introduced in 1957.

Kodak sold a number of larger, non-folding cameras (mostly automatic rangefinders) under the Retina label between 1958 and 1966. There was also a series of Retina Reflex SLRs produced between 1957 and 1966. The last cameras labeled as Retinas were the plastic-bodied Retina S1 and Retina S2, produced from 1966 to 1969. Kodak also manufactured the Retinette model series around the same time.