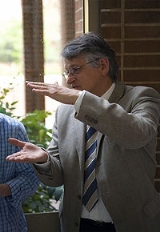 In 1962, von Klitzing passed the Abitur
Abitur
Abitur is a designation used in Germany, Finland and Estonia for final exams that pupils take at the end of their secondary education, usually after 12 or 13 years of schooling, see also for Germany Abitur after twelve years.The Zeugnis der Allgemeinen Hochschulreife, often referred to as...
at Artland
Artland
Artland is a Samtgemeinde in the district of Osnabrück, in Lower Saxony, Germany. It is situated along the river Hase, approx. 45 km north of Osnabrück, and 25 km west of Vechta. Its seat is the town Quakenbrück....
Gymnasium
Gymnasium (school)
A gymnasium is a type of school providing secondary education in some parts of Europe, comparable to English grammar schools or sixth form colleges and U.S. college preparatory high schools. The word γυμνάσιον was used in Ancient Greece, meaning a locality for both physical and intellectual...
in Quakenbrück
Quakenbrück
Quakenbrück is a town in the district of Osnabrück, in Lower Saxony, Germany. It is situated on the river Hase. It is part of the Samtgemeinde of Artland....
, Germany, before studying physics at the Braunschweig University of Technology, where he received his diploma in 1969. He continued his studies at the University of Würzburg
University of Würzburg
The University of Würzburg is a university in Würzburg, Germany, founded in 1402. The university is a member of the distinguished Coimbra Group.-Name:...
, completing his PhD thesis Galvanomagnetic Properties of Tellurium in Strong Magnetic Fields in 1972, and habilitation
Habilitation
Habilitation is the highest academic qualification a scholar can achieve by his or her own pursuit in several European and Asian countries. Earned after obtaining a research doctorate, such as a PhD, habilitation requires the candidate to write a professorial thesis based on independent...
in 1978. This work was performed at the Clarendon Laboratory
Clarendon Laboratory
The Clarendon Laboratory, located on Parks Road with the Science Area in Oxford, England , is part of the Physics Department at Oxford University...
in Oxford
Oxford
The city of Oxford is the county town of Oxfordshire, England. The city, made prominent by its medieval university, has a population of just under 165,000, with 153,900 living within the district boundary. It lies about 50 miles north-west of London. The rivers Cherwell and Thames run through...
and the Grenoble High Magnetic Field Laboratory in France, where he continued to work until becoming a professor at the Technical University of Munich
Technical University of Munich
The Technische Universität München is a research university with campuses in Munich, Garching, and Weihenstephan...
in 1980. Von Klitzing has been a director of the Max Planck Institute for Solid State Research
Max Planck Institute for Solid State Research
The Max Planck Institute for Solid State Research is part of the Max Planck Society which operates 80 research facilities in Germany. It is a research institute located in Büsnau which is part of Stuttgart, Germany....
in Stuttgart
Stuttgart
Stuttgart is the capital of the state of Baden-Württemberg in southern Germany. The sixth-largest city in Germany, Stuttgart has a population of 600,038 while the metropolitan area has a population of 5.3 million ....
since 1985.

The von Klitzing constant, RK = h
Planck constant
The Planck constant , also called Planck's constant, is a physical constant reflecting the sizes of energy quanta in quantum mechanics. It is named after Max Planck, one of the founders of quantum theory, who discovered it in 1899...
/e
Elementary charge
The elementary charge, usually denoted as e, is the electric charge carried by a single proton, or equivalently, the absolute value of the electric charge carried by a single electron. This elementary charge is a fundamental physical constant. To avoid confusion over its sign, e is sometimes called...
2 = , is named in honor of von Klitzing's discovery of the quantum Hall effect, and is listed in the National Institute of Standards and Technology
National Institute of Standards and Technology
The National Institute of Standards and Technology , known between 1901 and 1988 as the National Bureau of Standards , is a measurement standards laboratory, otherwise known as a National Metrological Institute , which is a non-regulatory agency of the United States Department of Commerce...
Reference on Constants, Units, and Uncertainty. The inverse of the von Klitzing constant is equal to half that of the conductance quantum
Conductance quantum
The conductance quantum is the quantized unit of conductance. It is defined as G0 = 2e2/h = ≈  Ω−1. It appears when measuring the conductance of a quantum point contact....
value.