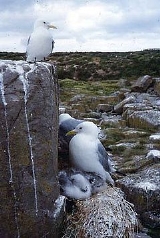 Encyclopedia
The kittiwakes are two closely related seabird
Seabird
Seabirds are birds that have adapted to life within the marine environment. While seabirds vary greatly in lifestyle, behaviour and physiology, they often exhibit striking convergent evolution, as the same environmental problems and feeding niches have resulted in similar adaptations...
species in the gull
Gull
Gulls are birds in the family Laridae. They are most closely related to the terns and only distantly related to auks, skimmers, and more distantly to the waders...
family Laridae, the Black-legged Kittiwake
Black-legged Kittiwake
The Black-legged Kittiwake is a seabird species in the gull family Laridae.This species was first described by Linnaeus in his Systema naturae in 1758 as Larus tridactylus....
(R. tridactyla) and the Red-legged Kittiwake
Red-legged Kittiwake
The Red-legged Kittiwake is a seabird species in the gull family Laridae. It breeds in the Pribilof, Bogoslof and Buldir islands of the USA, and the Commander Islands, Russia. Adults are long, with an wingspan and a body mass of ....
(R. brevirostris). The epithet
Epithet
An epithet or byname is a descriptive term accompanying or occurring in place of a name and having entered common usage. It has various shades of meaning when applied to seemingly real or fictitious people, divinities, objects, and binomial nomenclature. It is also a descriptive title...
s "Black-legged" and "Red-legged" are used to distinguish the two species in North America, but in Europe, where R. brevirostris is not found, the Black-legged Kittiwake is often known simply as Kittiwake, or more colloquially in some areas as Tickleass or Tickleace. The name is derived from its call, a shrill 'kittee-wa-aaake, kitte-wa-aaake'.

Kittiwakes are coastal breeding birds ranging in the North Pacific, North Atlantic and Arctic
Arctic Ocean
The Arctic Ocean, located in the Northern Hemisphere and mostly in the Arctic north polar region, is the smallest and shallowest of the world's five major oceanic divisions...
oceans. They form large, dense, noisy colonies during the summer reproductive period, often sharing habitat with murres. They are the only gull species that are exclusively cliff-nesting.

The Black-legged Kittiwake is one of the most numerous of seabirds. Breeding colonies can be found in the Pacific from the Kuril Islands
Kuril Islands
The Kuril Islands , in Russia's Sakhalin Oblast region, form a volcanic archipelago that stretches approximately northeast from Hokkaidō, Japan, to Kamchatka, Russia, separating the Sea of Okhotsk from the North Pacific Ocean. There are 56 islands and many more minor rocks. It consists of Greater...
, around the coast of the Sea of Okhotsk
Sea of Okhotsk
The Sea of Okhotsk is a marginal sea of the western Pacific Ocean, lying between the Kamchatka Peninsula on the east, the Kuril Islands on the southeast, the island of Hokkaidō to the far south, the island of Sakhalin along the west, and a long stretch of eastern Siberian coast along the west and...
throughout the Bering Sea
Bering Sea
The Bering Sea is a marginal sea of the Pacific Ocean. It comprises a deep water basin, which then rises through a narrow slope into the shallower water above the continental shelves....
and the Aleutian Islands to southeast Alaska
Alaska
Alaska is the largest state in the United States by area. It is situated in the northwest extremity of the North American continent, with Canada to the east, the Arctic Ocean to the north, and the Pacific Ocean to the west and south, with Russia further west across the Bering Strait...
, and in the Atlantic from the Gulf of St. Lawrence through Greenland
Greenland
Greenland is an autonomous country within the Kingdom of Denmark, located between the Arctic and Atlantic Oceans, east of the Canadian Arctic Archipelago. Though physiographically a part of the continent of North America, Greenland has been politically and culturally associated with Europe for...
and the coast of Ireland
Ireland
Ireland is an island to the northwest of continental Europe. It is the third-largest island in Europe and the twentieth-largest island on Earth...
down to Portugal
Portugal
Portugal , officially the Portuguese Republic is a country situated in southwestern Europe on the Iberian Peninsula. Portugal is the westernmost country of Europe, and is bordered by the Atlantic Ocean to the West and South and by Spain to the North and East. The Atlantic archipelagos of the...
, as well as in the high Arctic islands. In the winter, the range extends further south and out to sea.

In sharp contrast, the Red-legged Kittiwake has a very limited range in the Bering Sea
Bering Sea
The Bering Sea is a marginal sea of the Pacific Ocean. It comprises a deep water basin, which then rises through a narrow slope into the shallower water above the continental shelves....
, breeding only on the Pribilof
Pribilof Islands
The Pribilof Islands are a group of four volcanic islands off the coast of mainland Alaska, in the Bering Sea, about north of Unalaska and 200 miles southwest of Cape Newenham. The Siberia coast is roughly northwest...
, Bogoslof
Bogoslof Island
Bogoslof Island or Agasagook Island is the summit of a largely submarine stratovolcano located in the Bering Sea in the U.S. state of Alaska, behind the main Aleutian volcanic arc. It has a land area of and is unpopulated. The peak elevation of the island is...
and Buldir islands in the United States
United States
The United States of America is a federal constitutional republic comprising fifty states and a federal district...
, and the Commander Islands in Russia
Russia
Russia or , officially known as both Russia and the Russian Federation , is a country in northern Eurasia. It is a federal semi-presidential republic, comprising 83 federal subjects...
. On these islands, it shares some of the same cliff habitat as the Black-legged Kittiwake, though there is some localized segregation between the species on given cliffs.

In contrast to the dappled chicks of other gull species, kittiwake chicks are downy and white since they are under relatively little threat of predation, as the nests are on extremely steep cliffs. Unlike other gull chicks which wander around as soon as they can walk, kittiwake chicks instinctively sit still in the nest to avoid falling off. Juveniles take three years to reach maturity. When in winter plumage, both birds have a dark grey smudge behind the eye and a grey hind-neck collar. The sexes are visually indistinguishable.
The source of this article is wikipedia, the free encyclopedia.  The text of this article is licensed under the GFDL.