Encyclopedia
The Kirov-class battlecruiser is a class of nuclear-powered military ships of the Russian Navy, the largest and heaviest surface combatant warships (i.e., not an aircraft carrier
Aircraft carrier
An aircraft carrier is a warship designed with a primary mission of deploying and recovering aircraft, acting as a seagoing airbase. Aircraft carriers thus allow a naval force to project air power worldwide without having to depend on local bases for staging aircraft operations...
, assault ship, or submarine
Submarine
A submarine is a watercraft capable of independent operation below the surface of the water. It differs from a submersible, which has more limited underwater capability...
) currently in active operation in the world. The Russian designation is heavy nuclear-powered guided missile cruiser
Cruiser
A cruiser is a type of warship. The term has been in use for several hundreds of years, and has had different meanings throughout this period...
. Originally built for the Soviet Navy
Soviet Navy
The Soviet Navy was the naval arm of the Soviet Armed Forces. Often referred to as the Red Fleet, the Soviet Navy would have played an instrumental role in a Warsaw Pact war with NATO, where it would have attempted to prevent naval convoys from bringing reinforcements across the Atlantic Ocean...
, in Russia the class is usually known by the designation Project 1144 Orlan (sea eagle
Sea Eagle
Sea eagle mainly refers to Sea eagle, birds of prey of the genus Haliaeetus.It may also refer to:-Aerospace:* Sea Eagle , British, anti-ship missile* Sea Eagle * Supermarine Sea Eagle, 1920s British passenger flying boat-Sports:...
).

They are second in size only to large aircraft carriers, and are similar in size to a World War I
World War I
World War I , which was predominantly called the World War or the Great War from its occurrence until 1939, and the First World War or World War I thereafter, was a major war centred in Europe that began on 28 July 1914 and lasted until 11 November 1918...
battleship
Battleship
A battleship is a large armored warship with a main battery consisting of heavy caliber guns. Battleships were larger, better armed and armored than cruisers and destroyers. As the largest armed ships in a fleet, battleships were used to attain command of the sea and represented the apex of a...
. Because of their size, the ships are generally referred to as battlecruiser
Battlecruiser
Battlecruisers were large capital ships built in the first half of the 20th century. They were developed in the first decade of the century as the successor to the armoured cruiser, but their evolution was more closely linked to that of the dreadnought battleship...
s in western media. The appearance of the Kirov class played a key role in the recommissioning of the Iowa-class
Iowa class battleship
The Iowa-class battleships were a class of fast battleships ordered by the United States Navy in 1939 and 1940 to escort the Fast Carrier Task Forces which would operate in the Pacific Theater of World War II. Six were ordered during the course of World War II, but only four were completed in...
battleships by the United States Navy
United States Navy
The United States Navy is the naval warfare service branch of the United States Armed Forces and one of the seven uniformed services of the United States. The U.S. Navy is the largest in the world; its battle fleet tonnage is greater than that of the next 13 largest navies combined. The U.S...
in the 1980s.

Frunze
Soviet battlecruiser Frunze
Admiral Lazarev is the second Kirov class battlecruiser. In fact, she is not a battlecruiser, but a heavy missile cruiser. However, her size has given her the unofficial designation of a battlecruiser in the mass media of many countries...
, the second vessel in the class, was commissioned in 1984. She was assigned to the Pacific Fleet. In 1992, she was renamed Admiral Lazarev. The ship became inactive in 1994 and was decommissioned four years later. The ship is currently held in reserve. On 19 September 2009, General Popovkin, Deputy MOD for Armaments, said that the MOD is looking into bringing Lazarev back into service.

Kalinin
Soviet battlecruiser Kalinin
Admiral Nakhimov is the third battlecruiser of the Kirov class. In fact, she is not a battlecruiser, but a heavy missile cruiser. However, her size has given her the unofficial designation of a battlecruiser in the mass media of many countries...
was the third ship to enter service, in 1988. She was also assigned to the Northern Fleet. Renamed Admiral Nakhimov, she was mothballed in 1999 and reactivated in 2005. She is in overhaul at Severodvinsk Shipyard.

Construction of the fourth ship, Yuriy Andropov, encountered many delays; her construction was started in 1986 but was not commissioned until 1998. She was renamed Pyotr Velikiy (Peter the Great
Peter I of Russia
Peter the Great, Peter I or Pyotr Alexeyevich Romanov Dates indicated by the letters "O.S." are Old Style. All other dates in this article are New Style. ruled the Tsardom of Russia and later the Russian Empire from until his death, jointly ruling before 1696 with his half-brother, Ivan V...
) in 1992. The ship currently serves as the flagship of the Russian Northern Fleet.

On March 23, 2004, the Russian Navy Commander-in-Chief, Fleet Admiral Vladimir Kuroedov said Petr Velikiys reactor was in an extremely bad condition and could explode "at any moment". This statement was later withdrawn and may have been the result of internal politics within the Russian Navy, as Admiral Igor Kasatonov (the uncle of Petr Velikiys commanding officer, Vladimir Kasatonov
Vladimir Kasatonov
Vladimir Afanasyevich Kasatonov was a Soviet military leader, admiral, and Hero of the Soviet Union ....
) was testifying in the court hearings on the losses of K-159
Soviet submarine K-159
K-159 was a Project 627A "Kit" nuclear-powered submarine of the Soviet Northern Fleet. Her keel was laid down on 15 August 1962 at the Severodvinsk "Sevmash" Shipyard No. 402...
and Kursk.

The ship was sent to port for a month, and the crew lost one-third of their pay. Examinations found no problems with the ship's reactor.

The fifth ship, originally to be named Fleet Admiral of the Soviet Union Kuznetsov, was never laid down and was cancelled in 1990. Alternately reported to be known as Dzerzhinskiy. Her name was changed to Oktyabrskaya Revolutsiya (October Revolution), and then Kuznetsov, and later scrapped while incomplete.

The Kirov class's main weapons are 20 P-700 Granit
P-700 Granit
The P-700 Granit is a Soviet and Russian naval anti-ship cruise missile. Its GRAU designation is 3M45, its NATO reporting name SS-N-19 Shipwreck...
(SS-N-19 Shipwreck) missiles mounted in deck, designed to engage large surface targets. Air defense is provided by twelve octuple S-300F launchers with 96 missiles and a pair of Osa-MA batteries with 20 missiles each. The ships had some differences in sensor and weapons suites: Kirov came with SS-N-14
SS-N-14
Metel Anti-Ship Complex is a Russian family of anti-submarine missiles and warheads. There are different anti-submarine variants for cruisers and frigates, and a later version with a shaped charge that can be used against shipping as well as submarines.The missile carries an underslung...
ASW missiles, while on subsequent ships these were replaced with 9K331 Tor SAM systems. The Tor installation is in fact mounted further forward of the old SS-N-14 mounting, in the structure directly behind the blast shield for the bow mounted RBU ASW rocket launcher. Kirov and Frunze had eight 30 mm (1.2 in) AK-630 close-in weapon systems, which were supplanted with the Kashtan air-defence system on later ships.

Other weapons are the automatic 130 mm (5.1 in) AK-130 gun system (except in Kirov which had two single 100 mm (3.9 in) guns instead), 10 torpedo/missile tubes (capable of firing SS-N-15
SS-N-15
The RPK-2 Viyuga cruise missile is a complex Russian submarine launched missile. Its NATO reporting name is Starfish ....
missiles on later ships), Udav-1 with 40 anti-submarine rockets and two sextuple RBU-1000
RBU-1000
The RBU-1000 Smerch-3 is a 300 mm caliber Russian anti-submarine and anti-torpedo rocket launcher. It entered service around 1962-1963. It is similar in operation to the Hedgehog system used during the Second World War. The RBU-1000 is remotely aimed by the Burya fire control system...
launchers. 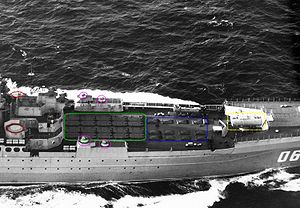 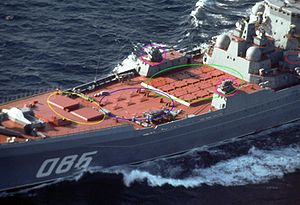