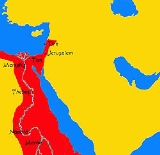 Encyclopedia
The native name of the Kingdom was likely kaš, recorded in Egyptian
Egyptian language
Egyptian is the oldest known indigenous language of Egypt and a branch of the Afroasiatic language family. Written records of the Egyptian language have been dated from about 3400 BC, making it one of the oldest recorded languages known. Egyptian was spoken until the late 17th century AD in the...
as .

The name Kash is probably connected to Cush in the Hebrew Bible
Hebrew Bible
The Hebrew Bible is a term used by biblical scholars outside of Judaism to refer to the Tanakh , a canonical collection of Jewish texts, and the common textual antecedent of the several canonical editions of the Christian Old Testament...
(Hebrew: כוש), son of Ham
Ham, son of Noah
Ham , according to the Table of Nations in the Book of Genesis, was a son of Noah and the father of Cush, Mizraim, Phut and Canaan.- Hebrew Bible :The story of Ham is related in , King James Version:...
(Genesis 10:6).

The conventional name "kingdom of Kush" was introduced in 19th-century Egyptology
Egyptology
Egyptology is the study of ancient Egyptian history, language, literature, religion, and art from the 5th millennium BC until the end of its native religious practices in the AD 4th century. A practitioner of the discipline is an “Egyptologist”...
.

Some scholars believe the economy in the Kingdom of Kush was a redistributive system. The state would collect taxes in the form of surplus produce and would redistribute to the people. Others believe that most of the society worked on the land and required nothing from the state and did not contribute to the state. Northern Kush seemed to be more productive and wealthier than the Southern area.

During the New Kingdom of Egypt, Nubia
Nubia
Nubia is a region along the Nile river, which is located in northern Sudan and southern Egypt.There were a number of small Nubian kingdoms throughout the Middle Ages, the last of which collapsed in 1504, when Nubia became divided between Egypt and the Sennar sultanate resulting in the Arabization...
(Kash) was an Egyptian province, governed by the Viceroy of Kush. With the disintegration of the New Kingdom around 1070 BCE, Kash became an independent kingdom centered at Napata
Napata
Napata was a city-state of ancient Nubia on the west bank of the Nile River, at the site of modern Karima, Northern Sudan.During the 8th to 7th centuries BC, Napata was the capital of the Nubian kingdom of Kush, whence the 25th, or Nubian Dynasty conquered Egypt...
.

The Kushites buried their monarchs along with all their courtiers in mass graves. Archaeologists refer to these practices as the "Pan-grave culture". The Kushites also built burial mounds and pyramids, and shared some of the same gods worshiped in Egypt, especially Ammon and Isis.

The Kush rulers were regarded as guardians of the state religion and were responsible for maintaining the houses of the Gods. 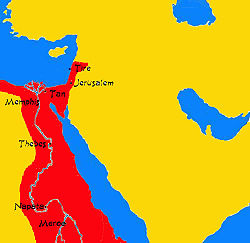 Taharqo was the son of Piye and the first seventeen years of his reign were very prosperous for Kush.Pharaoh Taharqo spent half his time as ruler of Egypt restoring its earlier cultural achievements while also fending off Assyrian power in the east. In 674 BC, he defeated an invading Assyrian army under the leadership of Esarhaddon
Esarhaddon
Esarhaddon , was a king of Assyria who reigned 681 – 669 BC. He was the youngest son of Sennacherib and the Aramean queen Naqi'a , Sennacherib's second wife....
. Three years later, he would be defeated in three battles that would force Kush out of Egypt altogether. Taharqo was followed by the Assyrians from Memphis to Thebes, abandoning his troops after being defeated in a battle at Pelusiam in the Eastern Delta. Why the Kushites chose to enter Egypt at this crucial point of foreign domination is subject to debate. Archaeologist Timmothy Kendall offers his own hypotheses, connecting it to a claim of legitimacy associated with Gebel Barkal. Kendall cites the stele of Pharaoh Piye
Piye
Piye, was a Kushite king and founder of the Twenty-fifth dynasty of Egypt who ruled Egypt from 747 BCE to 716 BCE according to Peter Clayton. He ruled from the city of Napata, located deep in Nubia, Sudan...
, which states that "Amun of Napata granted me to be ruler of every foreign country," and "Amun in Thebes granted me to be ruler of the Black Land (Kmt)". Noteworthy is that according to Kendall, "foreign lands" in this regard seems to include Lower Egypt while Kmt seems to refer to a united Upper Egypt and Nubia.

Aspelta
Aspelta
Aspelta was a ruler of the kingdom of Kush .Aspelta used titles based on those of the Egyptian Pharaohs.Horus name: Neferkha Nebty Name: Neferkha...
moved the capital to Meroë
Meroë
Meroë Meroitic: Medewi or Bedewi; Arabic: and Meruwi) is an ancient city on the east bank of the Nile about 6 km north-east of the Kabushiya station near Shendi, Sudan, approximately 200 km north-east of Khartoum. Near the site are a group of villages called Bagrawiyah...
, considerably farther south than Napata
Napata
Napata was a city-state of ancient Nubia on the west bank of the Nile River, at the site of modern Karima, Northern Sudan.During the 8th to 7th centuries BC, Napata was the capital of the Nubian kingdom of Kush, whence the 25th, or Nubian Dynasty conquered Egypt...
, possibly in 591 BC. It is also possible that Meroë had always been the Kushite capital.

Historians believe that the Kushite rulers may have chosen Meroë as their because, unlike Napata, the region around Meroë had enough woodlands to provide fuel for iron working. In addition, Kush was no longer dependent on the Nile to trade with the outside world; they could instead transport goods from Meroë to the Red Sea
Red Sea
The Red Sea is a seawater inlet of the Indian Ocean, lying between Africa and Asia. The connection to the ocean is in the south through the Bab el Mandeb strait and the Gulf of Aden. In the north, there is the Sinai Peninsula, the Gulf of Aqaba, and the Gulf of Suez...
coast, where Greek merchants were now traveling extensively.

The Kushites used the animal-driven water wheel to increase productivity and create a surplus, particularly during the Napatan-Meroitic Kingdom.

In about 300 BC the move to Meroë was made more complete when the monarchs began to be buried there, instead of at Napata. One theory is that this represents the monarchs breaking away from the power of the priests at Napata. According to Diodorus Siculus
Diodorus Siculus
Diodorus Siculus was a Greek historian who flourished between 60 and 30 BC. According to Diodorus' own work, he was born at Agyrium in Sicily . With one exception, antiquity affords no further information about Diodorus' life and doings beyond what is to be found in his own work, Bibliotheca...
, a Kushite king, "Ergamenes", defied the priests and had them slaughtered. This story may refer to the first ruler to be buried at Meroë with a similar name such as Arqamani
Arqamani
King Arqamani was a Kushite King of Meroë dating to the late 3rd to early 2nd century BCE who is known from inscriptions from Philae and Dakka...
, who ruled many years after the royal cemetery was opened at Meroë. During this same period, Kushite authority may have extended some 1,500 km along the Nile River valley from the Egyptian frontier in the north to areas far south of modern Khartoum and probably also substantial territories to the east and west.

Kushite civilization continued for several centuries. In the Napatan Period Egyptian hieroglyphs were used: at this time writing seems to have been restricted to the court and temples. From the 2nd century BC there was a separate Meroitic writing system. This was an alphabetic script with 23 signs used in a hieroglyphic form (mainly on monumental art) and in a cursive form. The latter was widely used; so far some 1278 texts using this version are known (Leclant 2000). The script was deciphered by Griffith, but the language behind it is still a problem, with only a few words understood by modern scholars. It is not as yet possible to connect the Meroitic language with other known languages.

Strabo
Strabo
Strabo, also written Strabon was a Greek historian, geographer and philosopher.-Life:Strabo was born to an affluent family from Amaseia in Pontus , a city which he said was situated the approximate equivalent of 75 km from the Black Sea...
describes a war with the Romans
Roman Empire
The Roman Empire was the post-Republican period of the ancient Roman civilization, characterised by an autocratic form of government and large territorial holdings in Europe and around the Mediterranean....
in the 1st century BC. After the initial victories of Kandake
Kandake
Kandake or Kentake, also Candace, was the title for queens and queen mothers of the ancient African Kingdom of Kush, also known as Nubia and Ethiopia....
(or "Candace") Amanirenas
Amanirenas
Amanirenas was a warrior-queen of Kingdom Kush.Her full name and title was Amnirense qore li kdwe li ....
against Roman Egypt, the Kushites were defeated and Napata
Napata
Napata was a city-state of ancient Nubia on the west bank of the Nile River, at the site of modern Karima, Northern Sudan.During the 8th to 7th centuries BC, Napata was the capital of the Nubian kingdom of Kush, whence the 25th, or Nubian Dynasty conquered Egypt...
sacked. Remarkably, the destruction of the capital of Napata was not a crippling blow to the Kushites and did not frighten Candace enough to prevent her from again engaging in combat with the Roman military. Indeed, it seems that Petronius's attack might have had a revitalizing influence on the kingdom. Just three years later, in 22 BCE, a large Kushite force moved northward with intention of attacking Qasr Ibrim. Alerted to the advanced, Petronius again marched south and managed to reach Qasr Ibrim and bolster its defences before the invading Kushites arrived. Although the ancient sources give no description of the ensuing battle, we know that at some point the Kushites sent ambassadors to negotiate a peace settlement with Petronius. By the end of the second campaign, however, Petronius was in no mood to deal further with the Kushites. The Kushites succeeded in negotiating a peace treaty on favourable terms.

The kingdom of Kush began to fade as a power by the 1st or 2nd century AD, sapped by the war with the Roman province of Egypt and the decline of its traditional industries.
Christianity began to gain over the old phaoronic religion and by the mid-sixth century AD the Kingdom of Kush was dissolved.