Encyclopedia
The Municipality of Kincardine is located on the shores of Lake Huron
Lake Huron
Lake Huron is one of the five Great Lakes of North America. Hydrologically, it comprises the larger portion of Lake Michigan-Huron. It is bounded on the east by the Canadian province of Ontario and on the west by the state of Michigan in the United States...
in the County of Bruce
Bruce County, Ontario
Bruce County is a county in western Ontario, Canada, and includes the Bruce Peninsula. As of 2006, the population was 65,349. The area was . The county seat is Walkerton, Ontario. It is located at ....
in the province of Ontario
Ontario
Ontario is a province of Canada, located in east-central Canada. It is Canada's most populous province and second largest in total area. It is home to the nation's most populous city, Toronto, and the nation's capital, Ottawa....
, Canada
Canada
Canada is a North American country consisting of ten provinces and three territories. Located in the northern part of the continent, it extends from the Atlantic Ocean in the east to the Pacific Ocean in the west, and northward into the Arctic Ocean...
. It has a population of 12,000, and covers an area of 580 square kilometres. The municipality, located at the mouth of the Penetangore River
Penetangore River
The Penetangore River is a river in Bruce County, Ontario which empties into Lake Huron at the town of Kincardine, Ontario. A boardwalk, a harbour, and the Kincardine lighthouse are located on the bank of this river near its mouth....
, was created in 1999 by the amalgamation of the Town of Kincardine, the Township of Kincardine, and the Township of Bruce. It was formerly known as Penetangore.

In addition to the town centre of the Town of Kincardine, The Municipality of Kincardine contains the following small communities:

Francis 'Paddy' Walker, who arrived in Kincardine (Then Penetangore) driving from Goderich on the ice along the Lake Shore, in a horse drawn cutter in the spring of 1850. He brought with him his wife, Jane and their seven sons. The Walker House Hotel
Paddy Walker House
The Paddy Walker House is Kincardine's oldest Building and the oldest Standing Hotel in Bruce County. - History :...
was built that same year, overlooking the Penetangore River.

The sand flats later became the harbour and the center of intense commercial and industry activity.

An outstanding example of the pioneer entrepreneurs who helped create strong communities, Mr. Walker also operated a schooner Mud Turtle, and was a contractor on the Durham Road as it was cut eastward through the bush from Kincardine

In the summer of 1851, the Durham Road finally reached its terminus at Penetangore, and allowed access to the settlement by land. The road would be considered nearly impassable by today's standards, but at the time represented a significant improvement in communication and trade. A post office
Post office
A post office is a facility forming part of a postal system for the posting, receipt, sorting, handling, transmission or delivery of mail.Post offices offer mail-related services such as post office boxes, postage and packaging supplies...
was established at Penetangore in the same year.

In the early years of Bruce County, Kincardine was the only township with any appreciable settlement, and served as the seat of local government for the entire county. Tensions eventually rose to the point where this arrangement could no longer be maintained, and on January 1, 1854 several new municipalities were formed, leaving only Kinloss Township and Bruce Township in union with Kincardine. Kinloss subsequently separated in 1855, and Bruce in 1856.

Over this time, the name Penetangore had gradually fallen out of favour, and was officially discontinued (except with regard to the river) when the Village of Kincardine was incorporated on January 1, 1858.

Kincardine’s first school was opened in the summer of 1851. The building was situated on the flats near the mouth of the river. This was the school until 1855 when a permanent building was secured.
During the years 1856 to 1866, a long, convoluted political battle was fought over the location of the county seat. Kincardine and Walkerton were the main contenders, and the latter finally emerged victorious. Kincardine would continue to dominate the county economically, but had clearly lost much of its early political primacy

To help govern the growing town a Town Hall was erected in December of 1872 at the cost of $8000. On the first floor of the building it had municipal rooms, a caretaker’s apartment and a fire hall, while the basement was a detention room and had several storage areas. The 2nd floor was an auditorium for town speeches and community plays.

With a new town council a law passed in 1874 stated that Kincardine was to be enforced by on constable. The first constable was Mr. William Purves. His office was in his home which was identified by a large sign over his front door which read “POLICE”


On December 29 1874 the last nail was hit on the new 67 miles of rail of the Wellington, Grey and Bruce Railway Company. The railway brought many new settlers into Kincardine which kick started a huge industrial expansion for the small village.

The Village of Tiverton, located on the boundary between Kincardine Township and Bruce Township, was incorporated in 1879.
To protect ships using the busy harbour, the Kincardine lighthouse was built in 1881.[2]
At some point during the late 1800s or early 1900s, the Village of Kincardine became the Town of Kincardine.

In 1902 F.E. Coombe and James Watson formed a partnership and began the operating the Coombe and Watson Furniture Company. In 1929 the company was renamed Coombe Furniture Co. Ltd. Coombe Furniture is recognized worldwide. When the Queen visited Charlottetown, Prince Edward Island her suite was furnished with Coombe furniture, The company closed in 1973 when people started buying cheaper that didn’t last a lifetime instead of the pricey, life-lasting Coombe furniture.
From 1907 – 1908 the Kincardine Public Library was built on Queen street.

Kincardine and District General Hospital was first proposed in November, 1908 by Madame Josephine Gualco, a wealthy, widely-travelled European lady who, between her many trips to Europe, made her home in Kincardine. She had purchased the Grant property on Queen Street North and proposed to donate it along with $2,500 annually for the creation of a hospital to serve Kincardine and surrounding district. The Hospital was incorporated by on December 17, 1908 under the Ontario Companies Act

For a small growing town communication is a huge asset. However the telephone had not reached Kincardine. Since Bell was not interested in supplying rural service the people in the surrounding townships began to organize their own company. On July 11 1912 the Bruce Municipal Telephone Company was born. The company is now called “Bruce Telecom”. 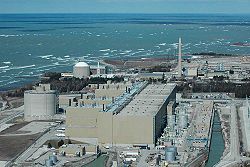 As a result of the purchase/lease of the site by British Energy and the subsequent assumption of the lease by a wholly Canadian consortium following the Enron scandal
Enron scandal
The Enron scandal, revealed in October 2001, eventually led to the bankruptcy of the Enron Corporation, an American energy company based in Houston, Texas, and the dissolution of Arthur Andersen, which was one of the five largest audit and accountancy partnerships in the world...
, Bruce Power has resumed operation of Bruce A, a 4 unit station. Units 3 and 4 are in commercial operation and units 1 and 2 are undergoing a massive refurbishment requiring a retube of the fuel channels in the reactor and a replacement of the steam generators. Bruce Power has also applied to the Ontario Government following the Energy Minister's release of the forecast of needed new generation with a request to be allowed to build new Nuclear facilities.

The Bruce site also contains Ontario Power Generation
Ontario Power Generation
Ontario Power Generation is a public company wholly owned by the Government of Ontario. OPG is responsible for approximately 70% of the electricity generation in the Province of Ontario, Canada. Sources of electricity include nuclear, hydroelectric, solar, wind, and fossil fuel...
's (OPG) Western Waste Management Facility for the storage of low and intermediate-level radioactive waste from the Bruce, Pickering and Darlington nuclear power stations, and the used nuclear fuel from the Bruce station. OPG has proposed the construction and operation of a deep geologic repository for the long-term management of the low and intermediate level waste on lands adjacent to the Western Waste Management Facility. Pending approvals and licensing by regulatory agencies, the DGR will commence construction in 2013 and operation in 2018.

In 1998, the Village of Tiverton lost its separate incorporation, and became part of the Township of Bruce.

The council currently consists of:

The demonym of a citzen of Kincardine is a Kincardinite.

Kincardine is home to many parks and trails that run throughout the town of Kincardine. Sports are a huge part of the community mostly focusing around hockey in the winter and soccer in the summer. The local community centre, The Davidson Centre is the central location for most recreation activities as it has a park, skate park, soccer fields, track (indoor & outdoor), swimming pool, gym, basketball court and hockey rink.

All the other hockey teams in town go under the name of "The Kincardine Kinucks".

Kincardine also has a rugby team, created several years ago. They are known as the Barbarians or "Barbs" and serve as the rugby team for Kincardine and surrounding areas.

The Kinetic Knights FIRST Robotics Team (Kincardine & District Secondary School) competes in the FIRST Robotics Competition. The team placed 2nd in the world in their 2011 season.

Known as the most historic street in Kincardine, Harbour Street gets its name from the harbour located to one side. The town's old lighthouse and museum are located on it, as well as The Erie Belle
Erie Belle
The Erie Belle was a Great Lakes steam ship which exploded in 1883 along the eastern shore of Lake Huron. Built in 1864 as the Hector, she initially served the east coast of the USA during the Civil War era...
Restaurant and the Harbour Street Brasserie. Perhaps the most famous landmark on Harbour Street is the Walker House
Paddy Walker House
The Paddy Walker House is Kincardine's oldest Building and the oldest Standing Hotel in Bruce County. - History :...
, the oldest building in Kincardine, which is now a museum. Kincardine is known for its beautiful and clean beaches, including Tiny Tot beach, Station Beach (Reunion Park), and Boiler Beach. Very popular among youth and adults alike are the two piers attached to the marina. Arguably one of the best spots to watch the internationally famous sunsets, the South Pier is also a very popular "cliff-jump" style swimming location for all.