David Branch
David Branch
David E. Branch has served as the Commissioner of the Ontario Hockey League since September 15, 1979, and as the President of the Canadian Hockey League since 1996...
has been the only Commissioner of the OHL from this time. Since 1980 the league has grown rapidly into a high profile marketable product, with many games broadcast on television and radio.

There are currently 20 teams in the OHL; 17 are based in the Canadian province of Ontario, two teams in the American state of Michigan
Michigan
Michigan is a U.S. state located in the Great Lakes Region of the United States of America. The name Michigan is the French form of the Ojibwa word mishigamaa, meaning "large water" or "large lake"....
and one team in the American state of Pennsylvania
Pennsylvania
The Commonwealth of Pennsylvania is a U.S. state that is located in the Northeastern and Mid-Atlantic regions of the United States. The state borders Delaware and Maryland to the south, West Virginia to the southwest, Ohio to the west, New York and Ontario, Canada, to the north, and New Jersey to...
. Out of the 17 teams based in Ontario, 13 teams are in Southern Ontario
Southern Ontario
Southern Ontario is a region of the province of Ontario, Canada that lies south of the French River and Algonquin Park. Depending on the inclusion of the Parry Sound and Muskoka districts, its surface area would cover between 14 to 15% of the province. It is the southernmost region of...
, two teams are in Eastern Ontario
Eastern Ontario
Eastern Ontario is a subregion of Southern Ontario in the Canadian province of Ontario which lies in a wedge-shaped area between the Ottawa River and St. Lawrence River...
and two teams are in Northern Ontario
Northern Ontario
Northern Ontario is a region of the Canadian province of Ontario which lies north of Lake Huron , the French River and Lake Nipissing. The region has a land area of 802,000 km2 and constitutes 87% of the land area of Ontario, although it contains only about 6% of the population...
.

The three largest arenas in the OHL are Ottawa's J. Benson Cartage Centre
Ottawa Civic Centre
The Ottawa Civic Centre, also known as the J. Benson Cartage Centre for 2011–2012, is an indoor arena located in Ottawa, Ontario, seating 9,862. With temporary seating and standing room it can hold 10,585. Opened in December 1967, it is used primarily for sports, including curling, figure skating,...
, London's John Labatt Centre
John Labatt Centre
The John Labatt Centre is a sports-entertainment centre, in London, Ontario, Canada -- the largest such centre in southwestern Ontario.The John Labatt Centre, usually referred to as the "JLC", opened on October 11, 2002. It is named after John Labatt, founder of the Labatt brewery in London...
, and the Kitchener Memorial Auditorium in Kitchener. 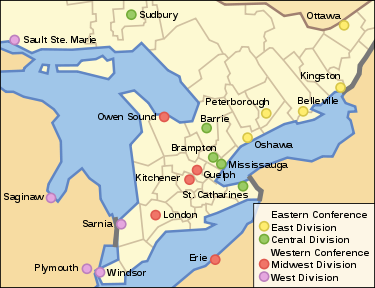 The 20 OHL clubs play a 68 game unbalanced schedule, which starts in the third full week of September, running until the third week of March. Ninety per cent (90%) of OHL games are scheduled between Thursday and Sunday to minimize the number of school days missed for its players. Ninety-five per cent (95%) of the players in the league are attending high school or college.

The 2010 OHL All-Star Classic will be played at the K-Rock Centre in Kingston.

The Memorial Cup
Memorial Cup
The Memorial Cup is a junior ice hockey club championship trophy awarded annually to the Canadian Hockey League champion. It is awarded following a four-team, round robin tournament between a host team and the champions of the CHL's three member leagues: the Ontario Hockey League , Quebec Major...
has been captured 14 times by OHL/OHA teams since the tournament went to a three-league format in 1972:
The Cup was also won 16 times by OHA teams in the period between 1945 and 1971:

The Priority Selection was first conducted the summer before the 1969–70 OHA season, with Kitchener selecting Bill Barber first overall. It has been conducted annually since then. Originally the draft was for 17 year old midgets, and each team was permitted to protect 8 midget area players (Toronto was allowed to protect 10 players from its midget sponsored teams). In 1975 the league phased out the area protections, and the 1976 OHA midget draft was the first in which all midget players were eligible. In 1999 the league changed the draft to a bantam age (15 and 16 year old). It is a selection of players who are residents of the province of Ontario, the states of Michigan, Pennsylvania and New York, and other designated U.S. states east of the Mississippi River.

Prior to 2001, the OHL held the Priority Selection in a public forum, such as an arena. Drafts were attended by many players and family members. In 2001, the OHL decided to hold the "draft" via the Internet, greatly reducing the costs the league and its member teams incurred in hosting a public draft. This move reduced the stress and pressure that prospective players faced with a large crowd present.