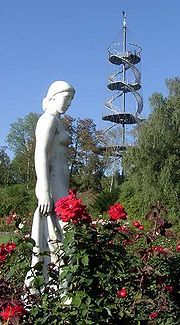 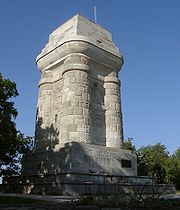 The Killesbergpark is an urban public park of half a square kilometre (123 acre
Acre
The acre is a unit of area in a number of different systems, including the imperial and U.S. customary systems. The most commonly used acres today are the international acre and, in the United States, the survey acre. The most common use of the acre is to measure tracts of land.The acre is related...
s) in Stuttgart
Stuttgart
Stuttgart is the capital of the state of Baden-Württemberg in southern Germany. The sixth-largest city in Germany, Stuttgart has a population of 600,038 while the metropolitan area has a population of 5.3 million ....
, Germany
Germany
Germany , officially the Federal Republic of Germany , is a federal parliamentary republic in Europe. The country consists of 16 states while the capital and largest city is Berlin. Germany covers an area of 357,021 km2 and has a largely temperate seasonal climate...
. It is just north of the state capital, and borders the city's fair
Fair
A fair or fayre is a gathering of people to display or trade produce or other goods, to parade or display animals and often to enjoy associated carnival or funfair entertainment. It is normally of the essence of a fair that it is temporary; some last only an afternoon while others may ten weeks. ...
grounds. The park dates back to the horticultural
Horticulture
Horticulture is the industry and science of plant cultivation including the process of preparing soil for the planting of seeds, tubers, or cuttings. Horticulturists work and conduct research in the disciplines of plant propagation and cultivation, crop production, plant breeding and genetic...
show of 1939. Before the show, a large area of the park had been a quarry
Quarry
A quarry is a type of open-pit mine from which rock or minerals are extracted. Quarries are generally used for extracting building materials, such as dimension stone, construction aggregate, riprap, sand, and gravel. They are often collocated with concrete and asphalt plants due to the requirement...
. It was transformed into a park with exhibition sites for the show, and has remained, hosting horticultural events on a regular basis, including the Bundesgartenschau and the IGA.

Every July the park hosts the popular Lichterfest Stuttgart. Thousands of lanterns are placed around the park, decorating the park for a variety of family activities throughout. After dark, there is a fireworks show accompanied by music. Visitors often bring blankets to sit on for the show.

Since its opening, the park has been home to the 381-millimetre (15-inch) narrow-gauge Killesberg railway
Killesberg railway
The Killesberg Railway is a miniature railway in the Killesberg Park in Stuttgart, Germany.Opened with the park in 1939, the gauge track travels in a 2294.35 metre loop around the park...
. In the summer months, visitors can see two diesel
Diesel engine
A diesel engine is an internal combustion engine that uses the heat of compression to initiate ignition to burn the fuel, which is injected into the combustion chamber...
and two steam
Steam engine
A steam engine is a heat engine that performs mechanical work using steam as its working fluid.Steam engines are external combustion engines, where the working fluid is separate from the combustion products. Non-combustion heat sources such as solar power, nuclear power or geothermal energy may be...
locomotive
Locomotive
A locomotive is a railway vehicle that provides the motive power for a train. The word originates from the Latin loco – "from a place", ablative of locus, "place" + Medieval Latin motivus, "causing motion", and is a shortened form of the term locomotive engine, first used in the early 19th...
s, which have been fixtures in the park since 1950. The horticultural show of 1939 saw the opening of the railway, when two borrowed steam engines from Leipzig
Leipzig
Leipzig Leipzig has always been a trade city, situated during the time of the Holy Roman Empire at the intersection of the Via Regia and Via Imperii, two important trade routes. At one time, Leipzig was one of the major European centres of learning and culture in fields such as music and publishing...
traversed a short stretch of track. During World War II
World War II
World War II, or the Second World War , was a global conflict lasting from 1939 to 1945, involving most of the world's nations—including all of the great powers—eventually forming two opposing military alliances: the Allies and the Axis...
, the steam engines were returned to Leipzig for use there. New locomotives were purchased, and today there are two diesel and two steam engines in use.

Completed in 2000 the Killesberg tower is an observation tower
Observation tower
An observation tower is a structure used to view events from a long distance and to create a full 360 degree range of vision. They are usually at least tall and made from stone, iron, and wood. Many modern towers are also used as TV towers, restaurants, or churches...
, 40m high overlooking the park. It is cable-stayed tower construction designed by Jörg Schlaich
Jörg Schlaich
Prof. Dr.-Ing. Drs. h.c. Jörg Schlaich is a German structural engineer. He later founded his own firm Schlaich Bergermann & Partner.-Early career:...
, using cable-stayed bridge
Cable-stayed bridge
A cable-stayed bridge is a bridge that consists of one or more columns , with cables supporting the bridge deck....
technology.

From the 1950s until the 1980s there was a chair lift for visitors to enjoy views of the fairgrounds and parklands.

The twenty-metre high Bismarck tower
Bismarck tower
Bismarck Towers are a unique genre of German monument, built to honour the ex-chancellor of Prussia, Otto von Bismarck. A total of 240 of these towers were built between German unification and the National Socialist takeover, i.e. between 1869 and 1934...
stands one kilometre south-west of the exhibition halls. It was built on the Gaehkopf, the highest point in northern Stuttgart, giving good views of Stuttgart itself and in all directions. It was one of many towers built to commemorate Otto von Bismarck
Otto von Bismarck
Otto Eduard Leopold, Prince of Bismarck, Duke of Lauenburg , simply known as Otto von Bismarck, was a Prussian-German statesman whose actions unified Germany, made it a major player in world affairs, and created a balance of power that kept Europe at peace after 1871.As Minister President of...
. The building of over 410 Bismarck towers worldwide was planned, and 238 were actually built. The building of the tower was begun in 1902 by the students of the technical university in Stuttgart. The Stuttgart Bismarck tower was opened on 16 July 1904. In 2004, for its 100th anniversary, it was comprehensively renovated.