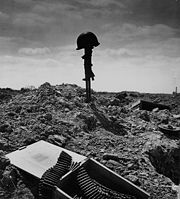 A casualty is a person who is the victim of an accident, injury, or trauma
Physical trauma
Trauma refers to "a body wound or shock produced by sudden physical injury, as from violence or accident." It can also be described as "a physical wound or injury, such as a fracture or blow." Major trauma can result in secondary complications such as circulatory shock, respiratory failure and death...
. The word casualties is most often used by the news media to describe deaths and injuries resulting from war
War
War is a state of organized, armed, and often prolonged conflict carried on between states, nations, or other parties typified by extreme aggression, social disruption, and usually high mortality. War should be understood as an actual, intentional and widespread armed conflict between political...
s or disaster
Disaster
A disaster is a natural or man-made hazard that has come to fruition, resulting in an event of substantial extent causing significant physical damage or destruction, loss of life, or drastic change to the environment...
s. Casualties is sometimes misunderstood to mean fatalities, but non-fatal injuries are also casualties.

In military
Military
A military is an organization authorized by its greater society to use lethal force, usually including use of weapons, in defending its country by combating actual or perceived threats. The military may have additional functions of use to its greater society, such as advancing a political agenda e.g...
usage, casualties usually refer to combatants who have been rendered combat-ineffective, or all persons lost to active military service, which comprises those killed in action
Killed in action
Killed in action is a casualty classification generally used by militaries to describe the deaths of their own forces at the hands of hostile forces. The United States Department of Defense, for example, says that those declared KIA need not have fired their weapons but have been killed due to...
, killed by disease
Disease
A disease is an abnormal condition affecting the body of an organism. It is often construed to be a medical condition associated with specific symptoms and signs. It may be caused by external factors, such as infectious disease, or it may be caused by internal dysfunctions, such as autoimmune...
, disabled by physical injuries, disabled by psychological trauma
Psychological trauma
Psychological trauma is a type of damage to the psyche that occurs as a result of a traumatic event...
, captured
Prisoner of war
A prisoner of war or enemy prisoner of war is a person, whether civilian or combatant, who is held in custody by an enemy power during or immediately after an armed conflict...
, deserted
Desertion
In military terminology, desertion is the abandonment of a "duty" or post without permission and is done with the intention of not returning...
, and missing
Missing in action
Missing in action is a casualty Category assigned under the Status of Missing to armed services personnel who are reported missing during active service. They may have been killed, wounded, become a prisoner of war, or deserted. If deceased, neither their remains nor grave can be positively...
, but does not include injuries which do not prevent a person from fighting.

Civilian casualties
Civilian casualties
Civilian casualties is a military term describing civilian or non-combatant persons killed, injured, or imprisoned by military action. The description of civilian casualties includes any form of military action regardless of whether civilians were targeted directly...
are civilian
Civilian
A civilian under international humanitarian law is a person who is not a member of his or her country's armed forces or other militia. Civilians are distinct from combatants. They are afforded a degree of legal protection from the effects of war and military occupation...
or non-combatant
Non-combatant
Non-combatant is a term in the law of war describing civilians not taking a direct part in hostilities, as well as persons such as medical personnel and military chaplains who are regular soldiers but are protected because of their function as well as soldiers who are hors de combat ; that is, sick,...
persons killed or injured by military action. The sum of casualties, whether military personnel or civilians, is known as the casualty count. Civilian prisoners of war are also casualties of war, but are counted separately from those injured or killed.

In relation to personnel, any person who is lost to his organization by reason of having been declared dead, wounded, diseased, detained, captured or missing.

Any casualty incurred as the direct result of hostile action, sustained in combat or relating thereto or sustained going to or returning from a combat mission.