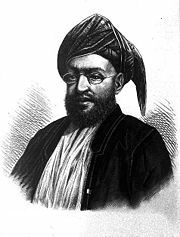 Sayyid
Sayyid
Sayyid is an honorific title, it denotes males accepted as descendants of the Islamic prophet Muhammad through his grandsons, Hasan ibn Ali and Husain ibn Ali, sons of the prophet's daughter Fatima Zahra and his son-in-law Ali ibn Abi Talib.Daughters of sayyids are given the titles Sayyida,...
Khalifa I bin Said Al-Busaid, GCMG, (or Chalîfe) (1852- February 13, 1890) was the third Sultan of Zanzibar. He ruled Zanzibar from March 26, 1888 to February 13, 1890 and was succeeded by his brother, Ali bin Said Al-Busaid.

"It is a well-known fact in Zanzibar that Barghash
Barghash bin Said of Zanzibar
Sayyid Barghash bin Said Al-Busaid, GCMG, GCTE , son of Said bin Sultan,was the second Sultan of Zanzibar. Barghash ruled Zanzibar from October 7, 1870 to March 26, 1888....
, as soon as he had ascended the throne in 1870, suddenly and without any cause cast our second youngest brother Chalîfe into prison. The poor fellow had to languish there for three long years in the dungeon, in heavy iron fetters weighed with chains! And why? No one could say. It may have been feared that Chalîfe, being next in succession to the throne, might plot the same treacherous plans as Barghash himself had once tried against Madjid
Majid bin Said of Zanzibar
Sayyid Majid bin Said Al-Busaid was the first Sultan of Zanzibar. He ruled Zanzibar from October 19, 1856 to October 7, 1870....
," Emily Ruete
Emily Ruete
Emily Ruete was born in Zanzibar as Sayyida Salme, Princess of Zanzibar and Oman. She was a daughter of Sayyid Said bin Sultan Al-Busaid, Sultan of Zanzibar and Oman...
p. 398. (Ruete wrote this in 1886.)

According to their sister Emily Ruete, Barghash did not release Khalifah before one of their sisters prepared to set out for a pilgrimage for Mecca
Mecca
Mecca is a city in the Hijaz and the capital of Makkah province in Saudi Arabia. The city is located inland from Jeddah in a narrow valley at a height of above sea level...
, and "he did not want to bring down upon himself a curse pronounced in the Holy City of the Prophet. But his sister did not pardon him before he had set free the innocent Chalîfe."

According to Ruete, Barghash continued to spy on Khalifah and his friends. She notes one instance where Barghash apparently willfully ruined a wealthy chief and friend of Khalifah, so that Khalifah would be deprived of support from rich chiefs.