Encyclopedia
Khachapuri is a filled bread dish from Georgia
Georgia (country)
Georgia is a sovereign state in the Caucasus region of Eurasia. Located at the crossroads of Western Asia and Eastern Europe, it is bounded to the west by the Black Sea, to the north by Russia, to the southwest by Turkey, to the south by Armenia, and to the southeast by Azerbaijan. The capital of...
. The bread is leavened and allowed to rise, and is shaped in various ways. The filling contains cheese
Cheese
Cheese is a generic term for a diverse group of milk-based food products. Cheese is produced throughout the world in wide-ranging flavors, textures, and forms....
(fresh or aged, most commonly suluguni
Suluguni
Suluguni is a pickled Georgian cheese from the Samegrelo region. It has a sour, moderately salty flavor, a dimpled texture, and an elastic consistency; these attributes are the result of the process used, as is the source of its moniker "pickle cheese". Its color ranges from white to pale yellow....
), eggs and other ingredients. 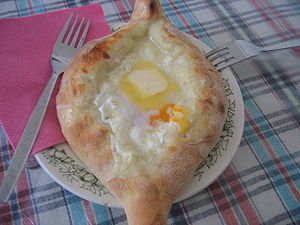 There are several distinctive types of khachapuri in Georgian food from different regions of Georgia: